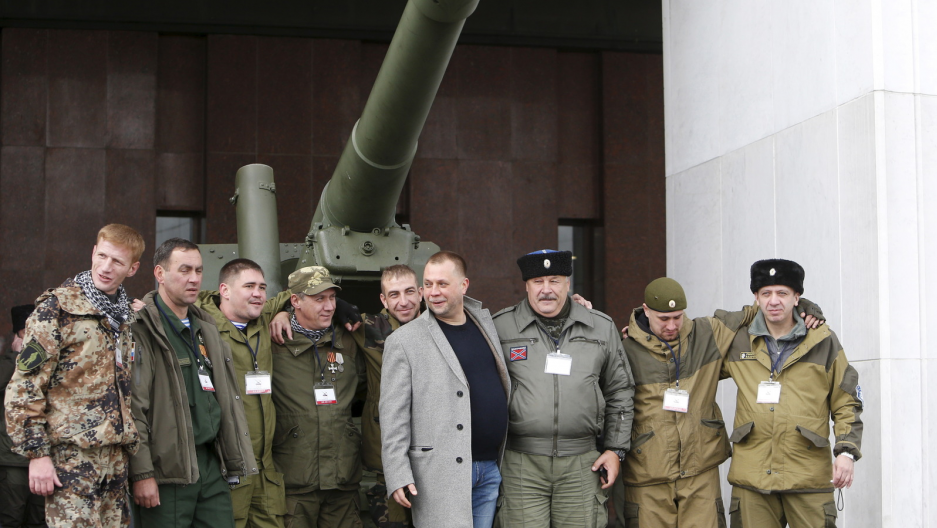 Alexander Borodai (C), former prime minister of the self-proclaimed Donetsk People's Republic, poses with delegates during the Union of Donbass Volunteers congress in Moscow, Russia, Oct. 10, 2015. A group of Russians who had been fighting in eastern Ukraine gathered in Moscow to set up an organization to support their members.

At first glance, the tactics appear as different as the geography.

In Ukraine, the Kremlin has denied — repeatedly — the presence of Russian armed forces. The war is cast as an internal conflict between a fascist Ukrainian government in Kiev and Russian-speaking separatists in the country’s east. Yet the Kremlin sides with the separatists politically while tacitly endorsing incursions by patriotic Russian “volunteers” to aid the separatists militarily. Many of these “volunteers” were once members of the armed forces. Others, it appears, still are.

In Syria, that narrative flipped on its head. Russia’s army — for two-and-a-half years and counting — has waged an open military intervention in the Syrian civil war. Officially, Russia is bringing war to ISIS at the invitation of its ally, Syrian leader Bashar al-Assad. The army is waging what’s portrayed as a largely successful air-and-sea campaign with minimal Russian losses. Yet, behind the scenes, a shadowy group of Russian mercenaries carries out a grisly ground campaign. Many are former “volunteers.”

A close look at both conflicts shows that the Russian definition of “soldier,” “mercenary” and “volunteer” seem to blur when convenient — often at the expense of those doing the fighting, and often to mask the stakes of Russia’s rise as a global power.

Victor Ageev, a Russian soldier, photographed with his mother Svetlana at a detention center in Ukraine in 2017.  Ageev was captured along by Ukrainian forces amid fighting in east Ukraine and has touted as proof of the Russian military's participation in the war.

Ukraine’s army had what passes for a good day in the war in eastern Ukraine.

Just outside of Luhansk in the country’s east, Ukrainian army soldiers routed a group of separatist fighters — killing one — and took several others prisoner, including a 22-year-old fighter named Viktor Ageev.

Video from that day shows Ageev, blond with a scruff of a beard, blindfolded and forced to his knees by his Ukrainian captors. He seems scared but unharmed — taking a drag from his interrogator’s cigarette when ordered to.

But next comes the important part: Ageev admits he’s Russian. A Russian soldier. He says he signed a “contract” at a military base in southern Russia and crossed over the border two months earlier. In a subsequent interview, he mentions something about “being paid” and  — vaguely — that “to serve is to serve.” Ageev, in other words, had been following orders.

Ukrainian media jumped on the story for obvious reasons: Ageev’s capture was proof — and not for the first time — of the Russian military’s role in a war it denies it has any part in.

Journalist Denis Korotkov of the online newspaper Fontanka.ru in St. Petersburg. Korotkov was first to publish reports of the Wagner Group, a team of Kremlin-affiliated mercenaries secretly operating in Syria.

There were losses in the desert that night. That much everyone can agree on.

In Deir al-Zour — an oil-rich region in eastern Syria — the US military and its coalition partners called in airstrikes after reportedly being fired upon by a group of forces loyal to Syrian leader Bashar al-Assad. The response, according to both US and Syrian officials, was overwhelming. And the counterattack was lethal.

But then reports surfaced that Russians — perhaps as few as five, perhaps as many as 200 — were among the dead. For the first time since the Cold War, Americans and Russians had engaged in direct battle.

Were they merely Russian civilians, as the Russian government implied in a statement about the incident? Or, as journalists and independent investigators contended, were the dead part of a shadowy militia with Kremlin connections known as the Wagner Group — a sort of Russian “Blackwater?” The families of the deceased seemed to have the answer.