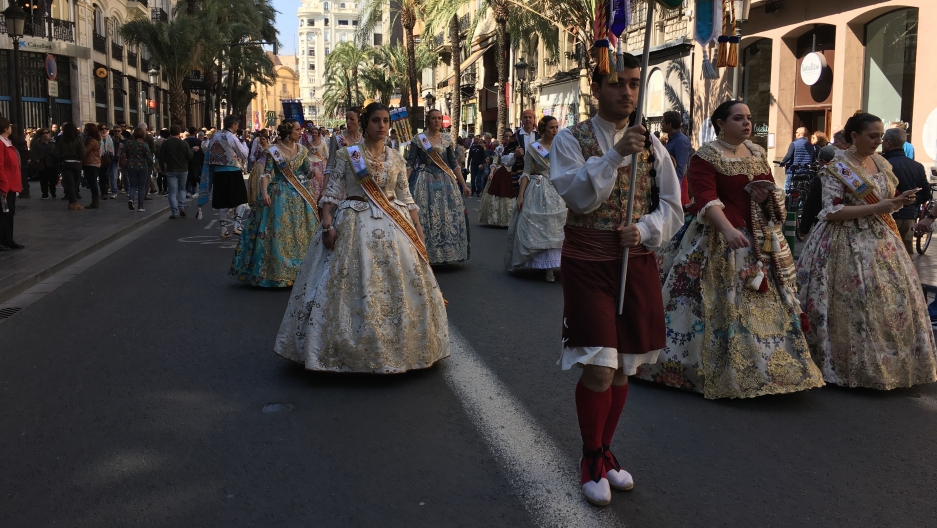 Traditional clothes are worn by young and old, women and men, at Valencia's annual Festival de las Fallas. Maria Victoria Liceras is an expert in the historical dress.

Every year on March 19, the coastal city of Valencia, Spain, explodes with close to 400 fireworks and then twice the number of fires. The burning of the niñots — figurines made of Styrofoam, cardboard, wood, papier-mâché and plaster — is the culmination of the Festival de las Fallas, one of the city’s most important celebrations.

The festival begins this week on Thursday and lasts for a few days. It extols noise and fire (las fallas means “the fires” in Valencian) and pays homage to the city’s history and traditions.

Among these traditions is the ofrenda — the offering of flowers to a giant statue of the Virgin Mary. For two days preceding the burning of the niñots, a stream of people — all in historical dress — converge on the plaza. With red and white carnations in their hands, participants dance, sing and play traditional music as they walk to the Plaza de la Virgen from all over the city. At the plaza, the bouquets they carry are stuffed into the wooden frame of the statue, creating a flower dress and cape more than 30 feet tall.

But the Virgin Mary's garb isn’t the only outfit that characterizes the festival. Traditional clothes worn by young and old, women and men, during the ofrenda and the consequent crema, the burning portion of the Fallas, are just as important.

“There is a movement called reinasença Valenciana,” said Maria Victoria Liceras, the president of the Association of Dress Historians in Valencia, referring to Valencia's cultural renaissance. “And what they want is to promote Valencia’s language and culture. One way to identify is by what is seen, and that is the way of dressing.” 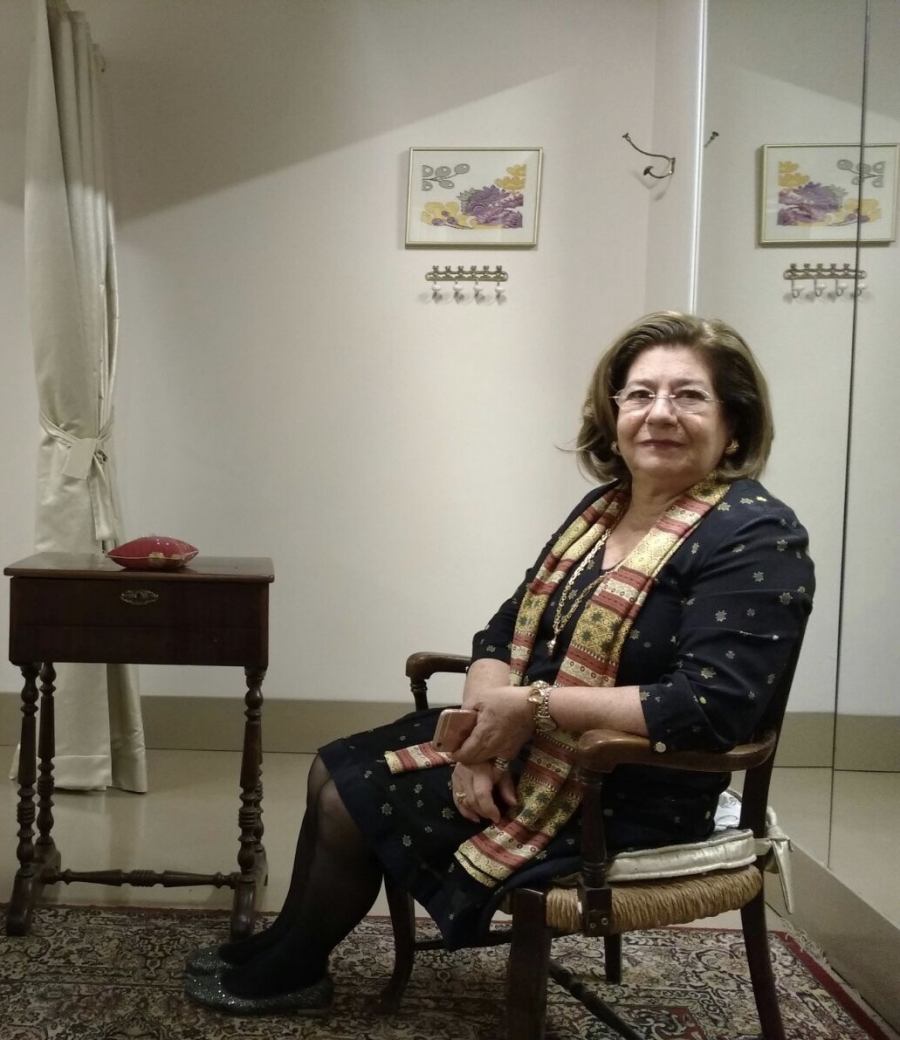 Maria Victoria Liceras has one of the most comprehensive antique dress collections in the city of Valencia — over 2,000 pieces altogether.

Liceras knows of what she speaks. A medical professional by trade and a dress history aficionado, she has been at the forefront of research into the evolution of Valencia’s fashion for more than 40 years. Her interest in antique clothing and accessories began when she was young.

“As a little girl, when I saw things that my mother had, I always told her, ‘This is for me,’” Liceras said. Later, while studying medicine and working in a hospital, she continued with her passion. She collected historic pieces. “Together with my husband, who was interested in scientific instruments, I went to fairs and flea markets. And whenever I saw something that had to do with textiles, I bought it."

She visited the city’s archives to understand how her collection fits into the historical narrative of the city. “Throughout the 18th and part of the 19th century in Spain, the tradition was that when a woman married, her father went to a notary to record everything she contributed to marriage,” Liceras said. “One of the things that were defined was clothing — down to the colors they wore — and seeing many such documents, you can reach the conclusion of how they dressed at a certain time.”

Crime records on robberies also provide a detailed glimpse into what people owned. “The first thing you have to have is reliable sources,” Liceras said. “There are paintings, engravings and graphic documentation, but many times you do not know if what the artist created was real or invented.”

Soon, Liceras had one of the most comprehensive antique dress collections in the city of Valencia — more than 2,000 pieces altogether — and a library of more than 1,000 books on fashion history. In 1980, while still working full time in the hospital, she opened a shop called Siglo XVIII, or 18th Century. It offers replicas of historical dresses made to order.

Today Siglo XVIII, as well as Liceras's work and collection, serve as a reference. Her shop has made wardrobes for a gala at the Madrid Congress of Deputies, theater plays and a TV series, and she’s been called upon to contribute pieces to exhibitions throughout Spain.

“In this field, everyone knows Maria Victoria and her passion to transmit the knowledge she has on the subject,” said Mariángeles Gómez Ródenas, museum curator at the General Directorate of Cultural Assets of Murcia. She made “an important contribution to the startup of the Silk Museum of Valencia. A good part of the contents was developed by her in addition to the generous contribution of pieces from her private collection.”

Marta Templado of Turiart, a tour agency that focuses on Valencia’s culture and art, agrees. “Maria Victoria helped train our guides specialized in silk heritage, silk history, the presence of the Silk Road in Valencia and its relation with Fallas,” Templado said. 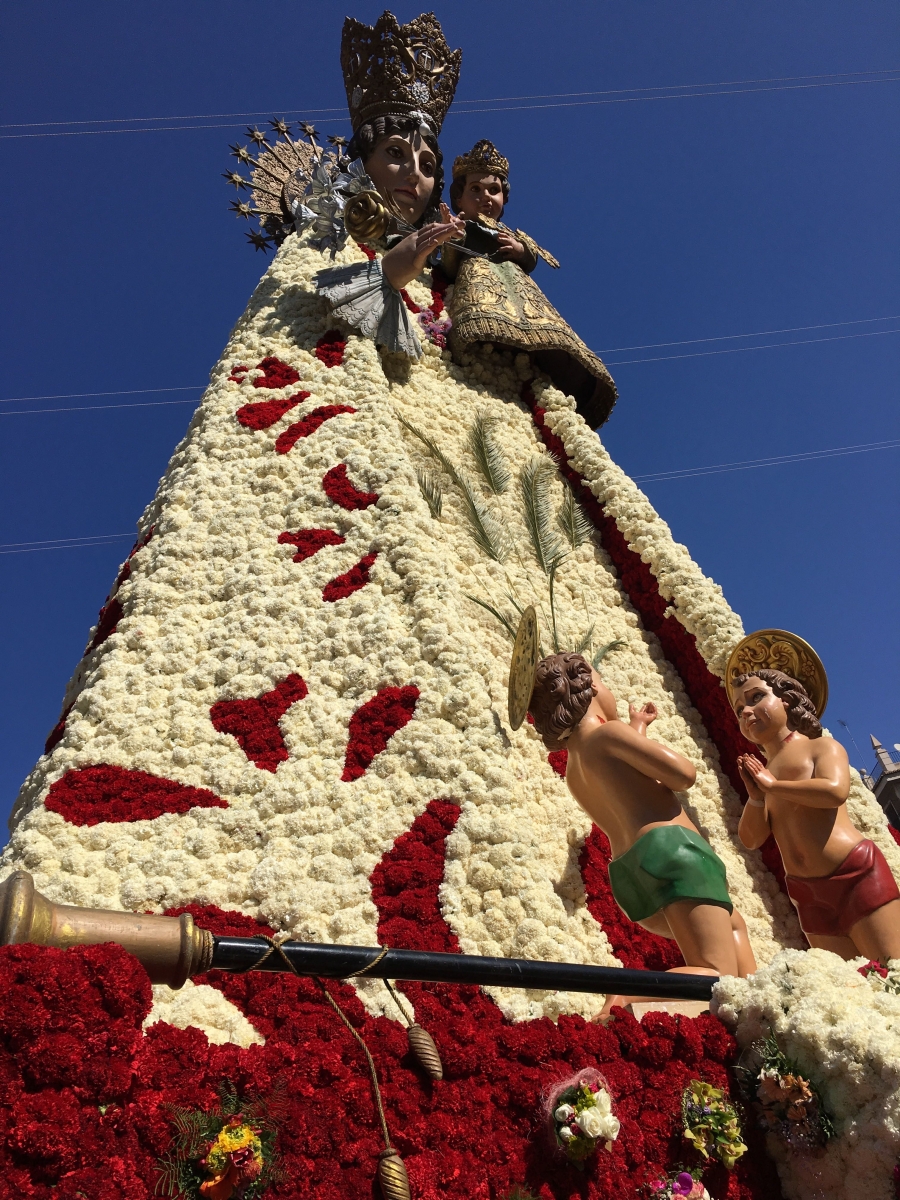 During the Festival de las Fallas, bouquets are stuffed into the wooden frame of the statue of the Virgin Mary, creating a flower dress and cape more than 30 feet tall.

In the months and weeks leading to the festival, Siglo XVIII is at its busiest. Clients call in to place new orders, buy accessories or seek alterations. “Dresses often pass from mothers to daughters,” Liceras said. Since retiring from the hospital four years ago, Liceras is at the store full-time and always on hand to consult for historical accuracy.

“You have to watch for the purity of the costume — old costumes must be reproduced as they were without mixing anything in,” from other centuries, Liceras insisted. “The Fallas has been included in UNESCO’s Representative List of the Intangible Cultural Heritage of Humanity. We have to be aware of the need to be dressed right.”

She isn’t the only one for whom traditional dress and its role in the Fallas are essential. According to Javier Mozas, a member of the Association of Fallas Studies and the librarian-archivist of the Central Board of the Fallas, the outfits people wear during the ofrenda and the crema are instrumental in financing the celebrations. “Because of the public’s interest and passion, newspapers and magazines publish a lot of information on the clothing. That means retailers and clothing companies invest in advertising,” Mozas said.

Raquel Alario, the 2017 fallera mayor of Valencia, echoes him. The main public face of the festival, she was chosen from among almost 400 falleras, the queens of the Fallas, to represent the city in countless events and ceremonies. “The traditional Valencian clothing is an economic engine for our city,” Alario said. “Thousands of people work in that sector. They study the clothing, analyze images, prints and documents and use that information for reproducing as exactly as possible every detail of traditional clothing.”

Liceras is one of those people. Although officially retired, she isn’t slowing down her involvement in the field that’s been her passion for several decades. Achieving historical accuracy in Valencia’s traditional dress is Liceras’s goal. “Poco a poco,” or “little by little,” she said, she is succeeding.