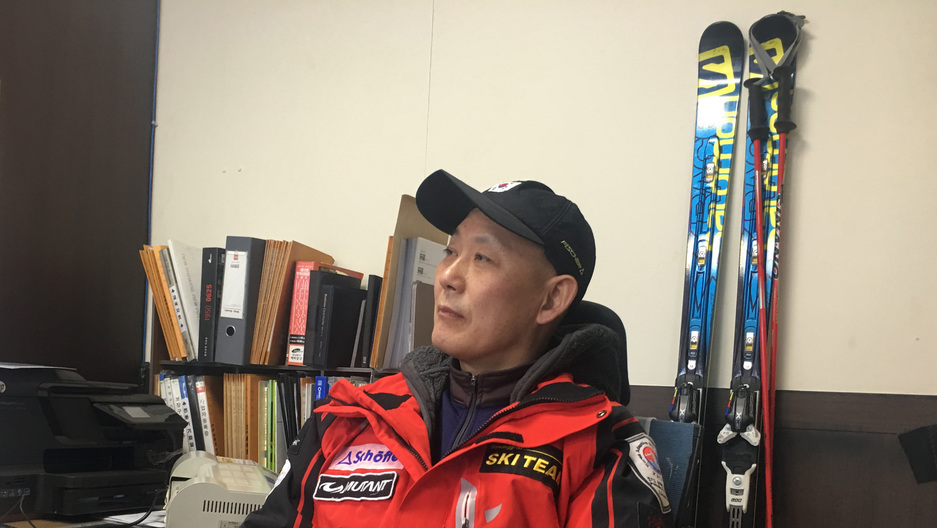 Yoo In-sik in his repair shop in Seoul. Yoo was one of South Korea's first Winter Paralympians.

Yoo In-sik slides open the front door of his repair shop, and a man on a mobility scooter pulls in. Yoo grabs an air hose, he fills his tires and backs out onto the street of this neighborhood in northern Seoul.

Yoo’s office is filled with parts of motorized wheel chairs and other adaptive equipment for persons with disabilities. Resting against the wall is a pair of skis and next to those is a device he made himself called an outrigger — it has ski blades which attach to his legs and helps Yoo stay balanced whenever he hits the slopes.

“I go out to the mountains on weekends during winter,” Yoo, 55, says.

But he is no ordinary skier — Yoo is one of South Korea’s first Winter Paralympians. He made his winter debut in Albertville, France, in 1992.

Tthe 2018 Winter Paralympics began Friday in Pyeongchang, with a record 576 athletes from 48 countries.

For Yoo, the idea that South Korea would host the games didn’t seem possible when he started skiing in the early 1980s.

“At that time winter sports weren’t so popular in Korea in general,” Yoo says, adding that winter sports programs for people with a disability were practically unheard of.

Yoo says he didn’t plan on becoming an athlete. He came from a poor family and had hoped to follow in his father’s footsteps as a career soldier in the South Korean armed forces.

But when Yoo was a teenager and awaiting military conscription in 1979, he was badly injured in a tractor accident. His right leg was amputated from the knee down. He underwent three operations and was fitted with a prosthetic leg.

“The accident happened out in the countryside and there wasn’t any good medical care there at the time,” he says. “If it had happened today, I would have been able to keep my leg.”

After enrolling in a ski camp for persons with disabilities, Yoo says he began to build his confidence. But he soon found that other skiers didn’t seem to want him on the mountain.

“I would take my leg off before I went skiing and people would tell me it was scaring children, so they made me wrap it up in a plastic bag,” Yoo says.

He recalls one time a janitor mistook his bag for garbage and threw his leg away.

“I had to ask the ski patrol to help find it and when we did, the cleaning crew just scolded me for leaving my leg around like that,” he says.

What was worse, Yoo says, was that sometimes while riding the chairlift, other skiers wouldn’t sit next to him.

“They’d just glance at my missing leg,” he says. “I guess they thought I was bad luck.”

Yoo says that prejudice hurt him, but it also motivated him to train harder so that one day he could earn their respect.

That dedication paid off when Yoo qualified as a power-lifter for the 1988 summer Paralympics in Seoul.

Even though he didn’t medal, it was a good experience, he says. What he really wanted, though, was to represent his country in the Winter Games, but South Korea had never sent athletes to those Paralympics before.

Then in 1992 Yoo got his shot; he and another South Korean skier qualified for the downhill race, making them pioneers for winter para-sports.

Looking back at it now, Yoo says they weren’t really prepared to compete.

“We didn’t even have the right skis for the competition,” he recalls. “I just felt athletes from the other countries were laughing at us.”

One silver lining to the whole experience, Yoo says, is that he beat all of Japan’s skiers in that event.

Yoo went onto compete in subsequent Winter Paralympics in Lillehammer and Nagano before retiring from racing.

Winter sports for persons with disabilities in South Korea have grown since Yoo made his debut 26 years ago. In the Pyeongchang Games, the host nation is fielding 36 athletes in all six sports events: alpine skiing, biathlon, cross-country skiing, ice hockey, snowboarding and wheelchair curling.

“While improvements have been made over the years, I still feel there is a gap between those with and without disabilities,” Min says.

But with or without the games in South Korea, Yoo says the prejudice that he used to experience on the ski trail is long gone.

“When I ski now, people cheer me on and clap for me,” he says. “I still get looks, but it feels like they are out of admiration for what I am doing.”

And when he leaves his prosthetic leg behind at the bottom of the mountain now, Yoo says he no longer has to wrap it up in a plastic bag.