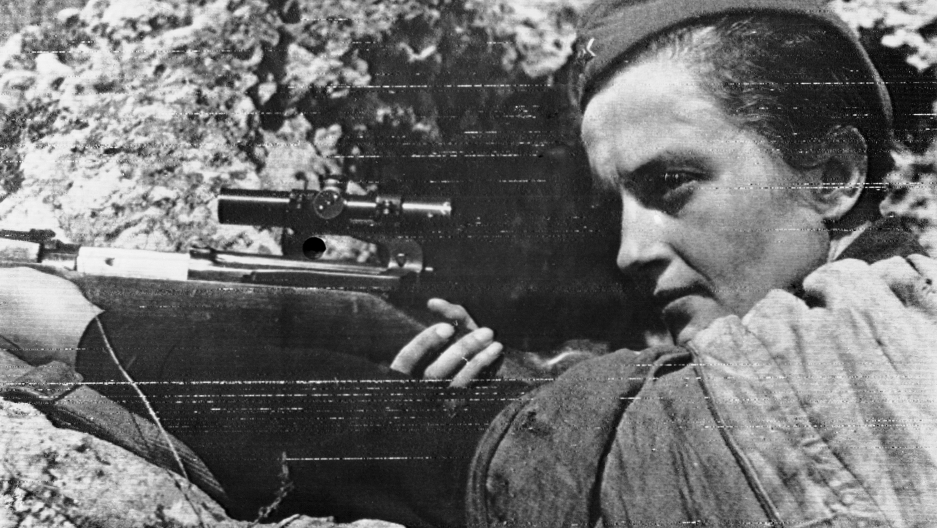 This Russian woman sniper, Lyudmila Pavlichenko, who has killed by her accurate shooting the magnificent total of 300 Germans before Sevastopol.

Pavlichenko was certainly used in the Soviet propaganda effort to get the United States involved in the war effort in Europe in 1942. While on a tour of the States, she frequently surprised American reporters by not attempting to be traditionally feminine or smartly dressed.

By 1942, however, Pavlichenko had been wounded four times and was, by Soviet accounts, suffering from severe post-traumatic stress disorder, even as she forced herself to put her game face on for the sake of the war effort. A man she loved had also recently died of his war wounds — after Pavlichenko had valiantly tried to save him by dragging him back from the field of battle. Impressing American men and living up to their retrograde notions of femininity was likely the furthest thing from Pavlichenko’s mind.

There was, however, an American woman Pavlichenko did impress — Eleanor Roosevelt. In fact, these two no-nonsense women toured the States together and formed a historic bond. Many years later, in the midst of the Cold War, Roosevelt had an emotional reunion with Pavlichenko in Moscow.

In pop culture, Pavlichenko has been immortalized by a Woodie Guthrie song, and the film “Battle for Sevastopol,” a joint Ukrainian-Russian production filmed before these two countries went to war with each other in 2014.

My own introduction to Pavlichenko occurred when my grandfather, a retired Soviet major general and WWII combat vet, traveled to visit our family after we had relocated to Charlotte, North Carolina from Kiev. I was a shy, lonely immigrant child, and my granddad, a tough guy who never forgot his Cossack roots in spite of his advancing age, wanted to tell me a story that would inspire me — about his contemporary, a pretty and brash and brave woman named Lyudmila.

Although he never served with her, my grandfather left the question of whether or not he had met Pavlichenko unanswered. As many men of his generation and military background, his had secrets, and most of those secrets he did not like to share.

According to my grandfather, who had access to a lot of insider information throughout his career, the rumor that Pavlichenko was nothing more than a propaganda myth actually started within the Soviet armed forces. He said that while Pavlichenko’s own account of her time at the front were sometimes doctored by Soviet military censors — a very common occurrence at the time — the woman herself was “the real deal.”

The sexual politics of the Soviet Union at wartime were pretty liberal — a fact that many Soviet veterans would later admit with a wink in their eyes, especially if they happened to be drinking in my grandfather’s old kitchen — but Pavlichenko committed what many thought was a cardinal sin when she dated men of a lower rank than she was. A rebellious woman, she had no interest in being owned, and a relationship with a higher-ranking officer frequently implied ownership.

There was also the fact that Pavlichenko was not a shy woman, and loved to be the life of the party. She was loud, she loved to dance, she came off as intimidating because she didn’t seek to impress the men around her — rather, she demanded they impress her instead.

“They were jealous of her.” I still remember this phrase from my grandfather. He wanted me to know that a high-achieving woman who did not play by the rules would anger and confuse men — though that fact didn’t sink in for me until much later. And while neither my grandfather nor father, men of military background, ever wanted me to pick up a weapon, they did consider Pavlichenko a good role model — a wounded but unbroken woman who did what she wanted.

I never saw my grandfather again after those long evenings spent in America with him, listening to his stories. After he went back to Ukraine, a stroke rendered him mute. He died soon after and I was not able to attend the funeral. I feel the weight of not being able to say goodbye, even as I carry his stories inside me, and I will feel it for the rest of my life. Some wounds are not meant to heal.

Pavlichenko’s wounds never fully healed either. She died when she was just 58, cradled in her son’s arms. The USSR had no decent palliative care programs or end-of-life care for its veterans, let alone anyone, and her death was a painful one. According to Pavlichenko’s daughter-in-law, Lyubov Davydovna, she swore like a sailor before she said goodbye to her son and passed away. There is something fundamentally tragic about an ending like that — and yet it is also bittersweet, and fitting, that this woman who did not care what anybody thought of her would leave the world just like this.