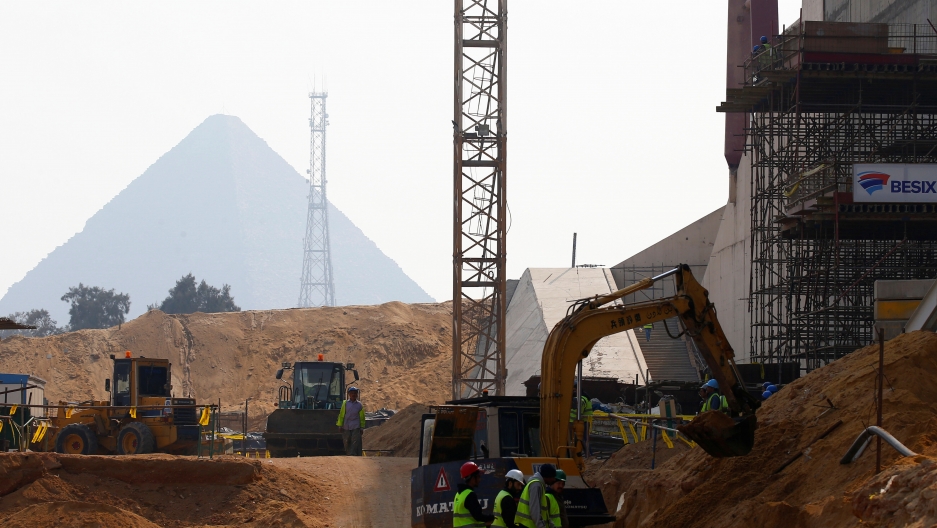 The site of Grand Egyptian Museum, which is under construction, is seen near the Giza Pyramids on the outskirts of Cairo, Egypt, January 30, 2018.

When Queen Hetepheres I’s tomb was discovered in 1925 near the satellite pyramids of the Great Pyramid of Giza, a large collection of her funeral furniture was taken to display at the Egyptian Museum of Antiquities in central Cairo.

The objects from her tomb have been part of one of the most significant collections at the cramped and overflowing museum located near the iconic Tahrir Square — about 12 miles from the Giza plateau where they were found.

But nearly 100 years since their discovery, her collection is set to return to where it came from — or at least very close by, to a lavish new mega museum overlooking the pyramids. The Grand Egyptian Museum, which is due to open later this year, is expected to be one of the largest archaeological museums in the world.

The museum intends to hold about 100,000 artifacts in total, less than half of which have already been transferred, according to Dr. Tarek Tawfik, director-general of the new museum.

The artifacts include a colossal 83-ton and 30-foot-high granite statue of King Ramses II, believed to be ancient Egypt’s most powerful pharaoh. The 3,200-year-old statue was transported just last month in a specially built cage, accompanied by a marching band and mounted military guard.

The Statue of King Ramses II is seen next to construction workers after it was transferred to the Grand Egyptian Museum on the outskirts of Cairo, January 30, 2018.

Probably the biggest draw for visitors however is likely to be Tutankhamun: The boy-king who ruled Egypt more than 3,000 years ago.

“Since the discovery of the tomb in 1922, only about a third of what was discovered in the tomb [has been] on display,” Tawfik said. This includes his funerary mask — recognized the world-over — that’s housed at the old Egyptian Museum. “But now, for the first time, we will be displaying the complete, over 5,000 objects that were discovered in the tomb,” he explained.

Tutunkhamun’s mummy however, which is too fragile too move, will remain in its tomb in Luxor’s Valley of the Kings in southern Egypt.

The idea for a snazzy, state-of-the-art museum was first conceived in 2000, to ease the burden on the old museum built in 1902. The old museum has long been compared more to an over-crowded storeroom than a museum — unfit to house and properly maintain its internationally cherished relics.

Egypt needed a museum “which would better protect, better present and better safeguard the treasures of ancient Egypt. At the same time, using modern technology and means of modern communication to make the antiquities much more accessible in an informative, enjoyable way,” said Tawfik.

Measuring to almost 700,000 square feet in size, or the equivalent of about 10 soccer fields, the museum complex is positioned next to a highway, and less than two miles from the main pyramids of Giza. 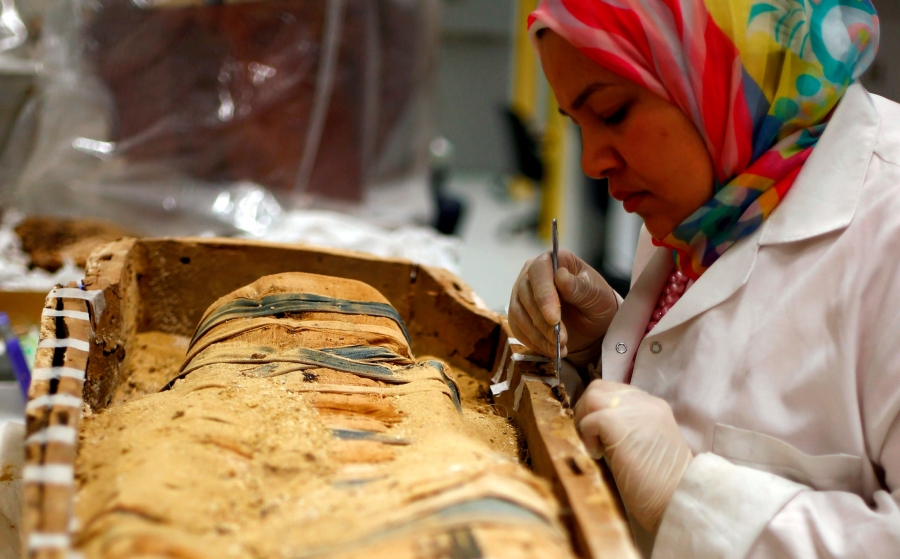 An Egyptian archaeological technician renovates one of the mummies which belonged to The Golden King Tutankhamun, in the conservation centre of the Grand Egyptian Museum, on the outskirts of Cairo, January 30, 2018.

While the pyramids are built on a lime stone plateau, the museum site is on a sand hill, which was a deliberate decision according to Tawfik. “This made it a bit more difficult to prepare the location, but it had the big plus point that there was no fear to stumble over antiquities here because the ancient Egyptians didn't build any temples or carve any tombs into sand.”

On top of this, “it's in the same height as the pyramids. So the visitor in the galleries in the museum will be looking through glass facades directly towards the pyramids,” he said. “The site is ingenious.”

And in another nod to the country’s most famous ancient landmark, the museum building is in the shape of a chamfered triangle.

The grand project hasn’t been without problems.

It’s faced numerous delays and a construction bill that has soared to $1 billion, especially after the political turmoil following the revolution in 2011 led to a prolonged economic donwturn.

Tourism, a key pillar of Egypt’s economy, plummeted in the years after the Arab Spring and is only now beginning to show signs of recovery. The daily hardship for Egyptians was further compounded by subsidy cuts and rising inflation after the country turned to the IMF for a loan in 2016.

The current Egyptian government has been pursuing an array of national mega projects including an extension to the Suez Canal and a new administrative capital, which critics have decried as vanity projects the country cannot afford.

But there has been much less criticism of the high cost of the Grand Egyptian Museum, perhaps because it preceded the current government’s “mega projects” plan. 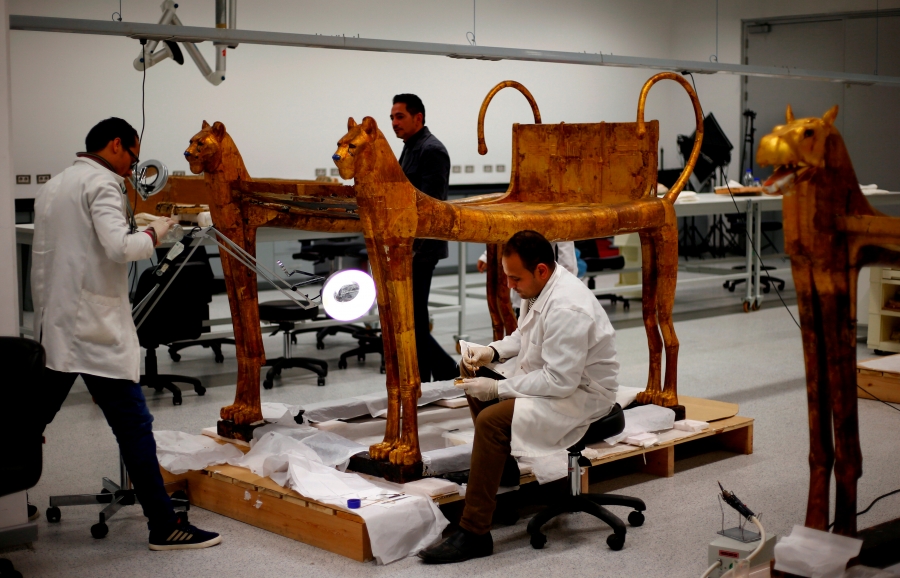 General manager of technical affairs Hussien Kamal, center, looks on as archaeological technicians work on artifacts that belonged to The Golden King Tutankhamun, in the conservation center of the Grand Egyptian Museum, on the outskirts of Cairo January 30, 2018.

Tawfik, however, puts it down to Egyptians being largely supportive and proud of the project. “This is seen as being Egypt's role in protecting this important part of humankind's heritage,” he said. “The Egyptian people, not only the government, the Egyptian people have deeply inside the feeling that this is something important — that this is something worth the investment.”

The Japanese government agrees. It helped Egypt finance the project with loans worth more than $750 million to draw tourists back to Egypt and help create “a memorable and very attractive place that people want to come back, not only once in a lifetime but repeatedly again and again,” said Takehiro Kagawa, ambassador of Japan to Egypt.

'The real guardians of their heritage'

Archaeologists around the world too see its potential.

“It is an exciting time for Egypt’s museum sector, which is striving to make its museums not only more accessible, but crucially also more appealing to Egyptian families and scholars rather than simply foreign tourists,” said Alice Stevenson, a senior lecturer in Museum Studies at University College London's Institute of Archaeology.

That the Grand Egyptian Museum attract Egyptians is of real importance to Tawfik, “so that the new generations in Egypt will be shown the history, the heritage, in an enjoyable way that makes them proud about their roots,” he said.  “At the same time make them grow up to be the real guardians of their heritage.”