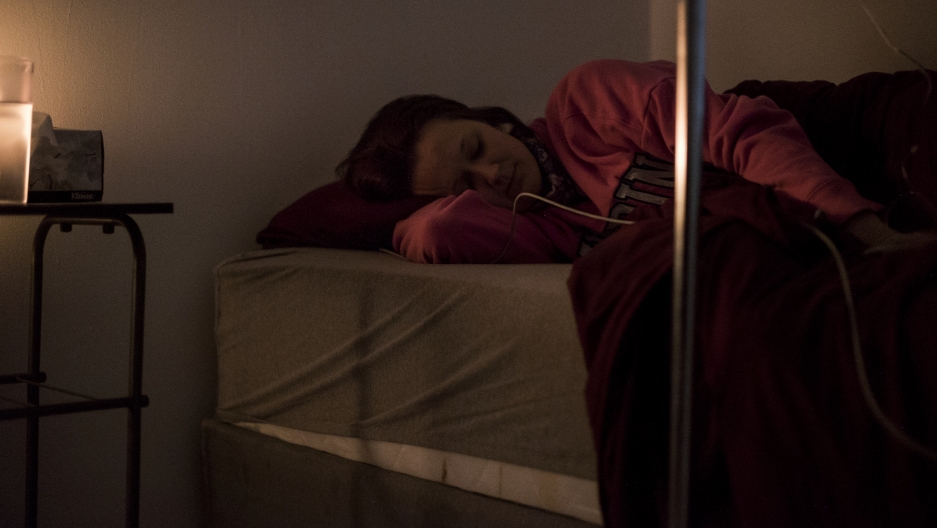 At the end of a dead end street in Rosarito, Mexico, Emily Albert is in the basement of The Ibogaine Institute, hallucinating about her son as a heroin addict, going through rehab and desperately trying to get clean. But Albert is the one going through treatment for addiction.

And this isn't just any treatment. She’s in the middle of a psychedelic treatment for opioid addiction.

Through tears, Albert recalls the vision of her son.

“I could just tell that he was older and going through whatever I’m going through. It was like, basically, if I don’t do this then he’s going to have to," she explains.

Albert is among a growing number of opioid addicts from the United States going to clinics in Mexico to get treated with a psychedelic drug called ibogaine. The drug is illegal in the US, but it has been shown to be extremely effective in alleviating opioid withdrawals and curbing addiction.

And unlike daily replacement therapies like buprenorphine or methadone, ibogaine only requires a one-time treatment. 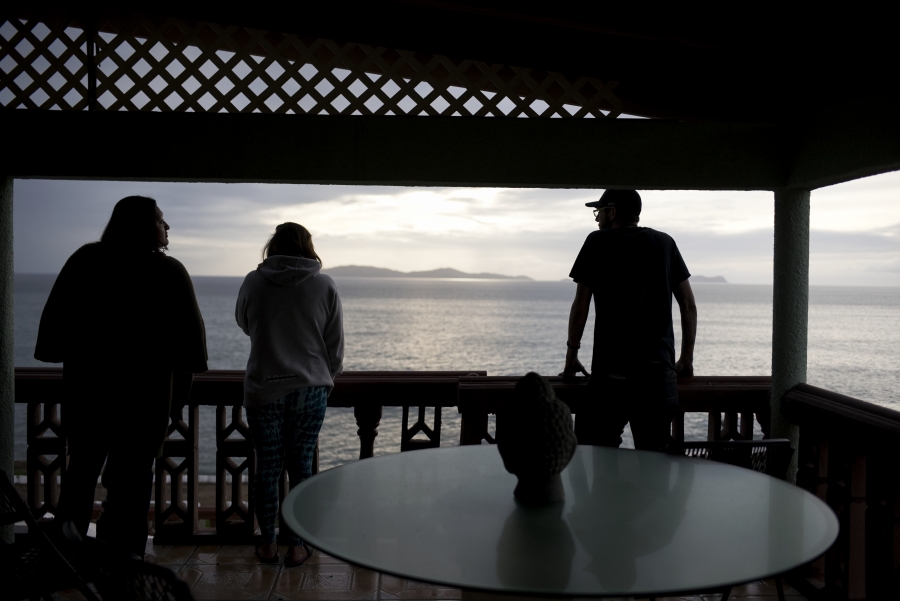 Staff at The Ibogaine Institute, an opioid rehab clinic, look at whales swimming off the Baja coast on February 14, 2018 in Rosarito, Mexico. The Ibogaine Institute treats patients with Ibogaine, a psychedelic drug that is illegal in the US, but has been shown to dramatically reduce opioid withdrawals and reduce long term addiction.

In 1970, the US Food and Drug Administration grouped ibogaine together with LSD and psilocybin (magic mushrooms) making them all schedule I substances — drugs which have no medical application and are not safe for use even under medical supervision. Its side effects include hallucinations, of course, but also seizures and even, in rare circumstances, negative impacts on the heart.

Still, there is a growing body of evidence suggesting the FDA may have it wrong.

“Essentially, it’s because of the backlash against the psychedelic '60s,” says Dr. Thomas Kinglsey Brown, an anthropologist and chemist at the University of California, San Diego.

In a study spanning eight years funded by the Multidisciplinary Association on Psychedelic Studies, or MAPS, Brown tracked outcomes for addicts who were treated with ibogaine.

“About 90 percent of the people in the study had a dramatic reduction in their withdrawal symptoms at the point when you’d expect they’d be at their worst," he says.

And, says Brown, not only was the severity of their addictions reduced throughout a 12-month follow-up period, their relationships with family and loved ones improved as well.

Two days after her own ibogaine treatment, Albert is sitting on a deck at the clinic overlooking the Pacific Ocean when it dawns on her that she hasn’t even thought about getting high in two days. 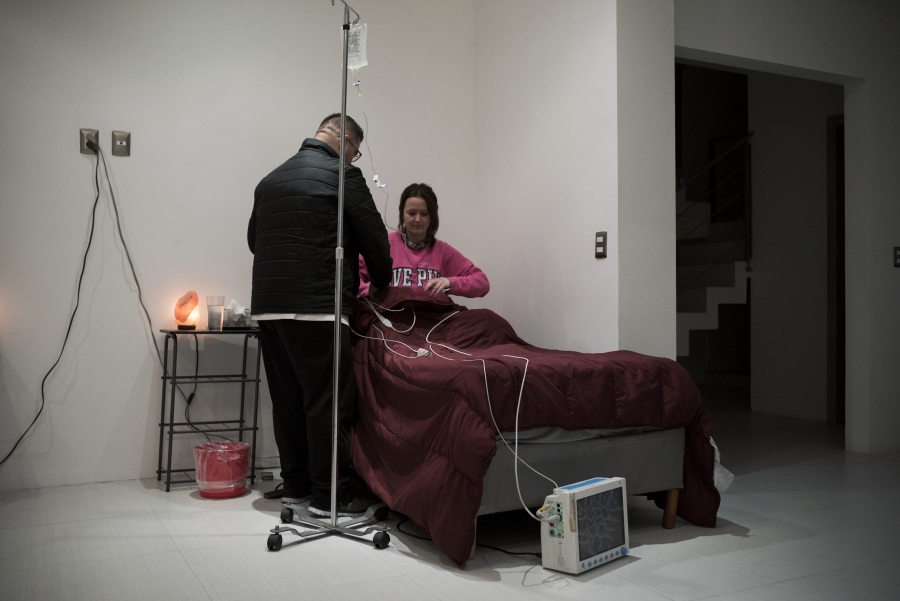 Emily Albert is hooked up to an EKG before she begins her 36-hour ibogaine treatment at The Ibogaine Institute on February 13, 2018 in Rosarito, Mexico.

That hasn’t happened in 10 years.

“It’s like they took my addiction and put it in an elevator and sent it a hundred floors down,” she says.

When Albert was 14, she had minor surgery on her big toe after a basketball injury and the doctor prescribed Percocet for the pain.

“I remember the very first time I tried one. I didn’t know if it was the antibiotics my mom had given me or what it was from those bottles, but I was like 'holy s—t that is great. I’m going to figure out what that was.'"

Over the next few days she tried one, then another. When she finally figured it out, she says, “it was game over from there.”

She quickly went from pills to heroin. And when she had to worry about passing drug tests she’d huff cans of compressed air — sometimes up to 16 cans a day.

Because ibogaine is illegal in the US and not well known, the addicts who end up in Mexico seeking treatment are typically there as a last resort.

Thom Leonard owns the clinic. He says that their physical location on has taken on figurative significance. But it doesn't have to be.

Two days before Albert did her treatment she was coming off a stretch of homelessness, barricaded in a hotel room north of San Diego. She wasn’t answering the door or her phone and an employee from the clinic, sent to pick her up, feared she might have overdosed. 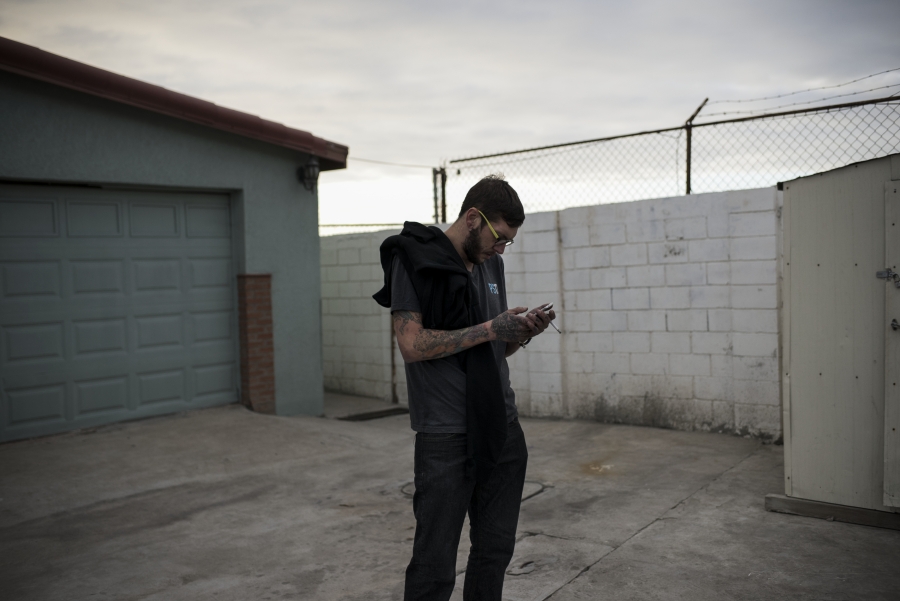 Thom Leonard, the director of the Ibogaine Institute, manages an emergency with a patient who is supposed to arrive that evening on February 12, 2018 in Rosarito, Mexico. The Ibogaine Institute uses a psychedelic drug called Ibogaine — illegal in the US, but shown to dramatically reduce opioid withdrawals and reduce long term addiction — to treat addicts.

When she finally did answer, a brief standoff ensued.

“She’s going to have to leave with you or leave with the police,” Leonard told the employee over the phone.

While Ibogaine shows a great deal of promise, it comes with risks. People have died while taking it. Between 1990 and 2008, 19 people are known to have died within 72 hours of taking Ibogaine. But researchers at NYU looked at autopsy and toxicological data from those deaths and found that most patients had pre-existing cardiac or liver conditions or still had opioids in their system, all of which are contraindications for Ibogaine.

And so the morning after she arrived, Albert was taken to get blood tests and an EKG exam to make sure she was healthy enough for treatment.

That night, in a dimly lit room at the clinic, a nurse inserted an IV, hooked Albert up to an EKG for monitoring throughout her treatment, then a doctor gave her three ibogaine pills.

Aside from the occasional bathroom break or scream you might expect to hear from someone having a bad dream, she stayed like that for more than 24 hours.

In reality, she was experiencing vivid hallucinations.

“There was a childhood memory that I didn’t know was there,” she recalled. “It kept going around and around and every time I’d get a little more.”

Leonard says that’s an important part of the process.

“You revisit your traumas, but you see them from a new perspective. And you get to make peace with these things — or at least move past them.”

The science behind ibogaine’s efficacy in treating addiction is up for debate.

Dorit Ron, a neurologist at University of California, San Francisco, led a 2008 study in mice that found ibogaine increased the level of a brain protein called GDNF, which prevents the development of addiction.

There are drugs that mimic some of ibogaine’s effects.

Savant HWP, an American pharmaceutical company, is scheduled to begin human trials next year on a drug called 18-MC, which claims to have ibogaine’s desirable effect on addiction — without the hallucinogenic component.

But people familiar with ibogaine’s use in treating addiction believe the psychedelic experience is critical to the treatment.

Brown says ibogaine is probably allowing new nerve connections to be formed. But, he adds, “psychological experiences are also creating changes in the brain.”

“It’s not quite as simple as, once this is in your body it’s helping to rewire things. There is an interplay with the psychology.”

So what are the prospects of a hallucinogenic, schedule I substance being approved for medical use in the US? 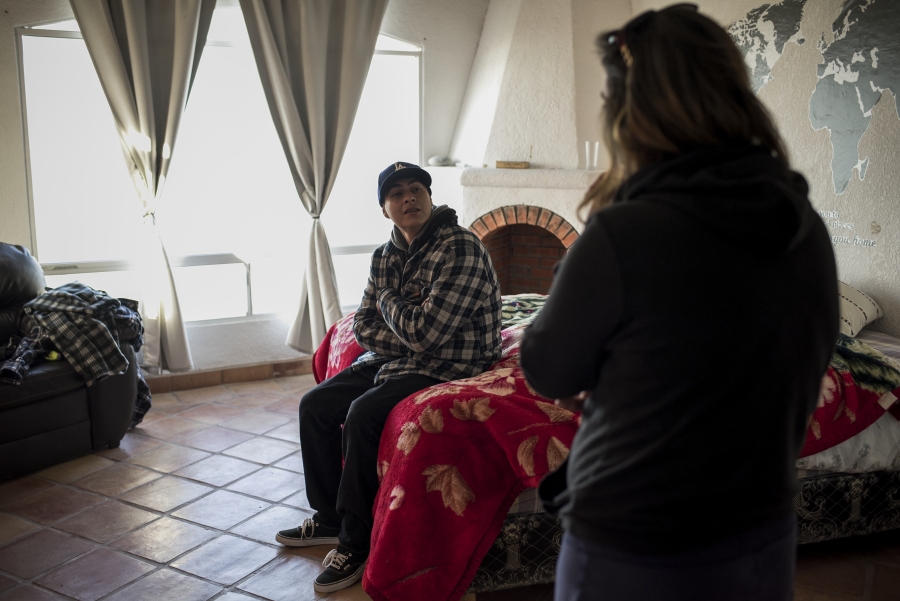 A staff member at The Ibogaine Institute talks to Andrew Ortega, a heroin addict who was just treated with a pyschedelic drug called Ibogaine on February 12, 2018 in Rosarito, Mexico.

The FDA just approved Phase III trials for MDMA — the active component in ecstasy — to study its use in treating post-traumatic stress. Brown believes it is likely to show good results and be approved.

If it does, he says, that will have an enormous impact on public opinion.

In the meantime, while the opioid epidemic in the US has slowly raised awareness of ibogaine, Leonard says that as an industry primarily run by former addicts, legitimacy has been a struggle.

“There is so much stigma around being an addict and so it’s hard for people to take us seriously sometimes,” laments Leonard.

In Rosarito, Leonard is slowly expanding his clinic into adjacent homes, moving down the street away from the dead end.

As ibogaine creeps into the mainstream, he hopes he can reach more people and no longer be the last house on the block.