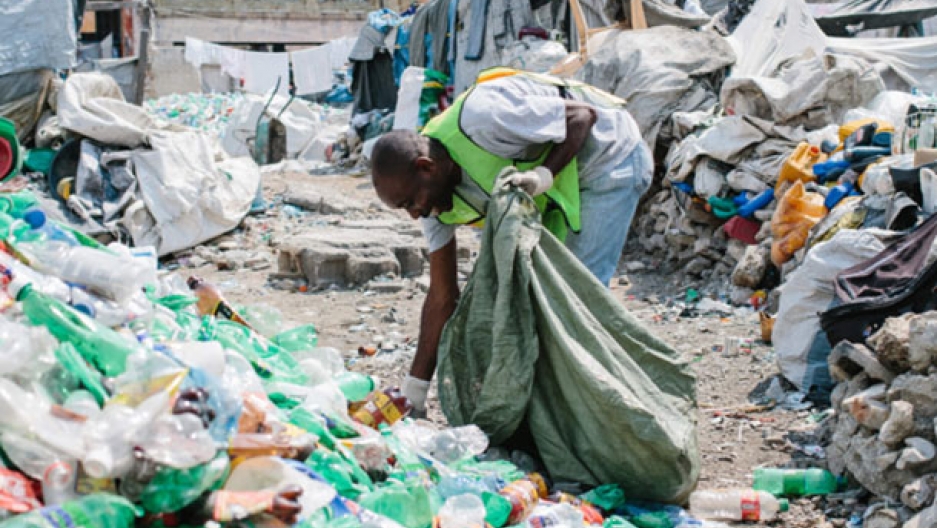 A Plastic Bank worker picks up plastic bottles for recycling.

There are roughly 5 trillion pieces of plastic sloshing around in the world’s oceans and the vast majority come from the world’s poorest countries, where proper disposal or recycling is largely impossible. An organization called The Plastic Bank aims to reverse this trend, while simultaneously alleviating poverty.

“We have built out the largest chain of stores in the world for the ultra-poor, where everything in the store is available to be purchased using plastic garbage,” says The Plastic Bank’s founder, David Katz. “Most proudly, we offer school tuition, medical insurance, Wi-Fi, power, sustainable cooking fuel, high-efficiency stoves and everything else the world needs and can't afford.”

While many activists and organizations are working to clean up the plastic already in the oceans, Katz’s plan is to stop plastic from getting into the ocean in the first place.

“Of the plastic that is entering the ocean, it is not surprising that it comes from those countries with extreme poverty,” Katz says. “If you don't have power or food for your children, recycling is not even in the realm of possibility. There is no garbage truck that comes by and picks up your waste. What you have is a stream, a river, a canal and the streets. Most countries have two seasons — the dry season, where everything goes into the river bed and the rainy season, when it's all washed out to sea.”

In Katz’s plan, people earn a living going door-to-door or through the streets collecting plastic. At the end of the day, they bring it back to one of The Plastic Bank’s locations, where it's weighed and checked for quality, and then the value of the plastic is transferred into a personal online account. Plastic becomes money, Katz says. 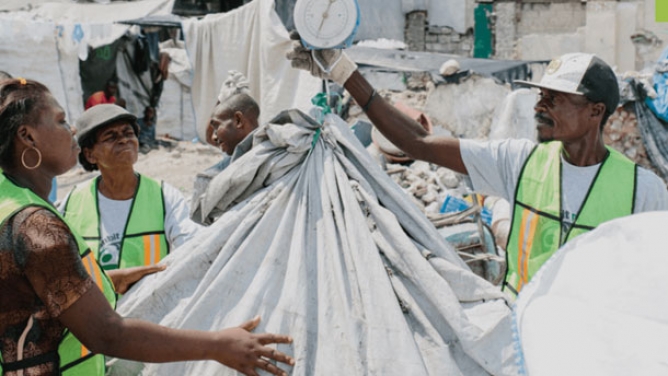 The Plastic Bank launched its first full-scale venture in Haiti in 2015. Since then, they have collected over eight million pounds of material, which equates to around 144 million plastic bottles, Katz says.

“The value that people can achieve on a daily basis in Haiti can triple or quadruple their income,” Katz says. “They are typically earning less than a dollar a day in what are predominately environmentally degrading industries, whereas with recycling they can go from a dollar to four. Some recyclers are making up to six dollars a day. And it goes by mass, so the more you collect, the more you make. It's an unlimited income opportunity.”

The Plastic Bank sells the raw material to companies like Marks and Spencers and the German consumer goods company Henkel, who then use it in their manufacturing. These companies, in turn, engage their consumers through the idea of purchasing Social Plastic — that is, plastic collected by workers in poor countries that has been stopped from entering the world’s oceans. “Buy a bottle of shampoo and you're directly collecting material from ocean-bound waterways and alleviating poverty simultaneously,” Katz says.

These companies are willing to pay a bit more for The Plastic Bank’s material out of a sense of social responsibility and the hope that a growing market for Social Plastic will help them against their competitors, Katz explains. “I've not yet found an organization that is not focused on building customers and keeping them,” Katz says.

Katz encourages all consumers to put companies on notice that they will no longer accept unnecessary plastic in their products.

“Every time you buy something with excessive plastic, every time you buy something with single-use plastic, you are voting for that to continue,” he says. “If you have some ambition about changing what is occurring in the ocean, then participate. There is a complete social media department at every one of those manufacturers and every one of those brands. They’re listening. So, reach out to them, tweet to them, email them. Let them know that you won’t stand for it and let them know that you want alternative packaging. They listen and they will eventually provide what customers want. That's what they do.”

The Plastic Bank has now begun operating in the Philippines and hopes to expand to Ethiopia and India this year, Katz says.