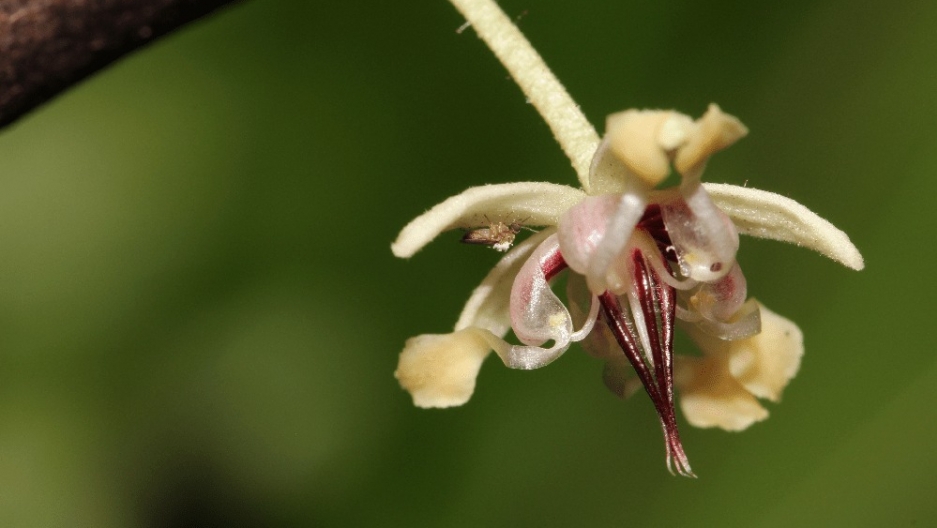 A biting midge pollinates a cacao flower on the Goodman Cacao Estate in Killaloe, Australia.

Chocolate is a global industry worth about $100 billion a year. What gets overshadowed in all those sweet treats and big profits are the bugs responsible for it all.

Chocolate comes from cacao beans, which come from the tiny flower of the cacao plant. Those plants are pollinated by even smaller flies called biting midges. For years, the flies have been the focal point of research by Samantha Jay Forbes, a doctoral candidate in agriculture and environment at James Cook University in Australia.

One grain of pollen translates into one cacao bean, she says.

Forbes spends many hours out in the field observing cacao flowers and midges, which are also known as sandflies. She says that a single cacao tree has the ability to produce more than 124,000 flowers in a season.

Midges like shady, wet areas that are surrounded by organic matter — tropical forests, for example. This environment, where the flies tend to lay their eggs and have their larvae develop, is in stark contrast to the manicured, orchardlike cacao fields — with full exposure to the sun, with no shade trees or understory — that have been popping up across the world in recent years, Forbes says.

While working at a cacao plantation in Australia, she conducted an experiment in which she wanted to see if manipulating the environment by putting back organic matter underneath the trees would lead to an increased midge population and a bump in pollination rates.

The results? There was a tenfold increase in the amount of natural pollination.

Forbes is quick to point out, though, that Australia is not saddled with a lot of the pest and pathogen problems that frustrate other cacao-producing regions of the world. She also conducts studies in Indonesia, where a fungal pathogen causes a form of pod rot called black pod disease that can kill 90 to 100 percent of the pods from a cacao plant. Adding organic matter under cacao plants in a place like Indonesia can actually make a plant more susceptible to fungal pathogens, Forbes says.

Although Forbes’ addition of organic matter would not work for all cacao producers, keeping the biting midge’s needs in mind is vital for the world’s chocolate supply, she says.

“We don't like midges and then you realize that we wouldn't have chocolate without them because we'd have no pollination services,” Forbes says. “I think you develop an appreciation for these small little flies and that huge role that they have in our societies.”

Stacy Philpott says don’t forget about the army ants as well. Philpott, an agroecologist at the University of California, Santa Cruz, says that the ants serve a vital role on both cacao and coffee plantations.

The ants — which have about 200 different species of army units found in Africa, Central America and South America — are carnivorous. They can eat other insects or even something as large as a reptile.

“When the army ant colony starts moving through the habitat, it chases away almost every living thing in its pathway,” Philpott says. “So, these colonies can have up to 20 million individuals in an army ant colony; when they're going through the agroforest they go up onto the cacao trees onto the shade trees and the trees almost turn black because they have so many ants on them.”

In addition to eating pest insects around the plants, the ants also attract birds that provide pest control through their appetites. There are 15 species of birds that will always follow the army ants and another 50 species that will occasionally do so, Philpott says.

Shade trees help, too. Philpott refers to several studies finding that coffee quality can be improved if the fruits are grown under the shade because the fruits themselves grow more slowly and the fruits are denser.

“That means that the coffee beans are heavier on a per volume basis,” Philpott says. “They roast better, [are] less prone to burning and might have a better flavor at the end.”

Shade trees will most likely be relied on more going forward as a buffer from climate extremes and changing weather patterns for cacao producers.

“Climate change could have a big impact because with changes in temperature and changes in precipitation, that's going to dramatically affect where the cacao can be grown, how the pods will ripen and how the insect community changes,” Philpott says.

The article is based on an interview on PRI’s Science Friday with Ira Flatow.