Jonathan Erland says the VFX crew working on "Star Wars" didn't just create the things you saw on screen. They had to build from scratch the equipment that made those visual effects.

There’s this old home movie you can find online. Shot on grainy film in the 1970s, it shows a group of young men and women working with cameras and miniature space ships while doing a lot of goofing around in front of the camera.

They’re working on the special effects for a film the world doesn’t know a thing about yet — a film called “Star Wars.”

Many on the visual effects crew thought it was going to be a box-office dud.

“It did look a bit rough and ready, some of the early dailies that we saw were more than a little shaky,” says Jonathan Erland, at that time a young visual effects artist on “Star Wars.”

“And then later, we heard stories of how Carrie Fisher and Harrison Ford threatened to tie George Lucas up and make him say his own lines.”

The British-born Erland came to the United States with dreams of becoming an actor, after studying in theater classes with Vanessa Redgrave and Judi Dench and getting small roles in television.

He turned to visual effects, he says, because it was easier to find steady work. He also had a background in industrial design.

But Erland says his work in front of the camera prepared him for the tech side of filmmaking.

“Acting is a lot more of a science than most people think," Erland says. “It is not all touchy-feely. It is a very deliberate science.”

When Erland got the job on the “Star Wars” special effects crew, working for a new company called Industrial Light and Magic, they set up their workshops in a shabby industrial park near Van Nuys Airport in Los Angeles.

“It was also in the height of summer and we had no air conditioning,” Erland says.

“We had to not only create all the stuff that you see on the screen but we had to create all the equipment and technology that put it on the screen,” Erland says. “And all of that was essentially new. There wasn’t a prior history for this technology, and so it had to work right out of the gate as we built it, and it did.” 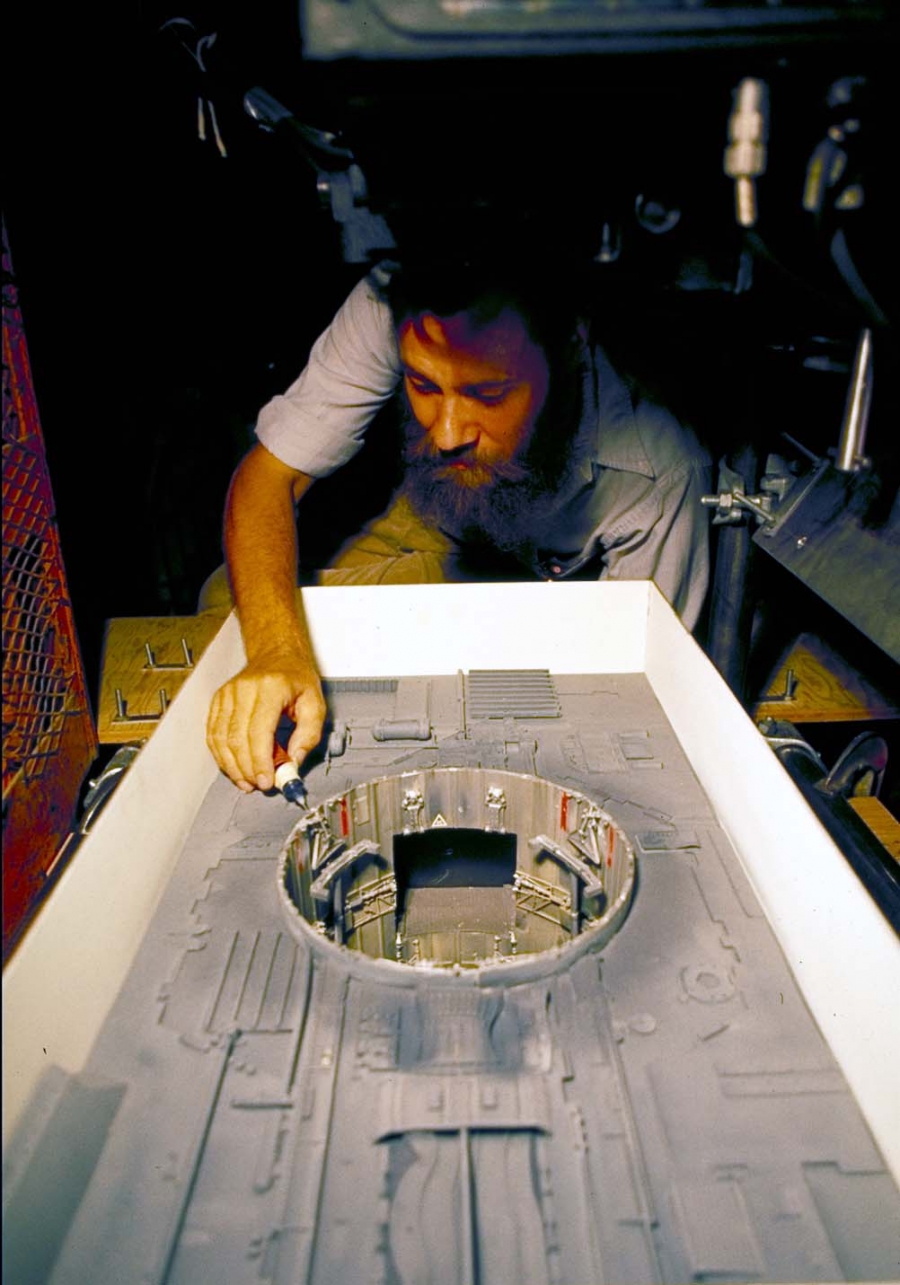 Jonathan Erland building a model for the original "Star Wars."

Today’s visual effects artists say they owe much to Erland and his colleagues. And this year, Erland was honored with a special technical achievement award by the Academy of Motion Picture Arts and Sciences.

“Jon and all the guys of his era, they figured out how to do all this stuff — and they taught us how to do it too,” says Mike Chambers, president of the Visual Effects Society and executive producer of effects on such films as “Dunkirk” and the upcoming “Wonder Woman 2.”

And the field was, and is, composed of mostly guys. (Even today, women make up less than 20 percent of visual effects artists on big-budget movies.)

“Although the tools and techniques have changed and advanced, it’s that knowledge and understanding that set that path for everybody else,” Chambers says.

After “Star Wars,” Erland went on to work on projects such as “Star Trek: The Motion Picture,” and developed and patented many filmmaking technologies.

But when he looks at movies today, he worries that maybe visual effects have become too important to on-screen storytelling, with filmmakers trying to mask poor plots and shallow characters with special effects.

“Visual effects can create wonderful things,” Erland says. “And if the use of visual effects were constrained to the necessities of effectively telling a story, that would be better than simply the wholesale use of effects for their own sake.”

One thing that Erland is happy about is the growing internationalization of the visual effects industry, with countries like India and South Korea becoming centers of new production and talent.

“America, whether it’s film or anything else, needs to realize that creativity doesn’t originate here,” Erland says. “Creativity is all over the planet. There is no American lock on innovation and creativity.”

But when you combine that globalization of the business with fewer Hollywood studios doing their visual effects in-house, that means American visual effects artists must increasingly go abroad to get gigs.

“You have people that will follow jobs from one center to another of production activity,” Chambers says. “For some folks, it’s a bit of a migrant film worker situation.”

Now in his 70s, Erland runs a small film equipment rental shop with his wife in LA’s Highland Park neighborhood. He says every so often those who worked on the first “Star Wars” movie get together to swap stories and catch up.

As for the objects they created for the film — objects that would be holy relics to movie fans, like models for the original Death Star — they’re mostly gone.

“As soon as we finished the Death Star shots,” Erland recalls, “we shoveled it up, put it in a dumpster and off it went to a landfill.”

Erland says that’s just the way the movie business works; once something has been shot, it’s often tossed away.