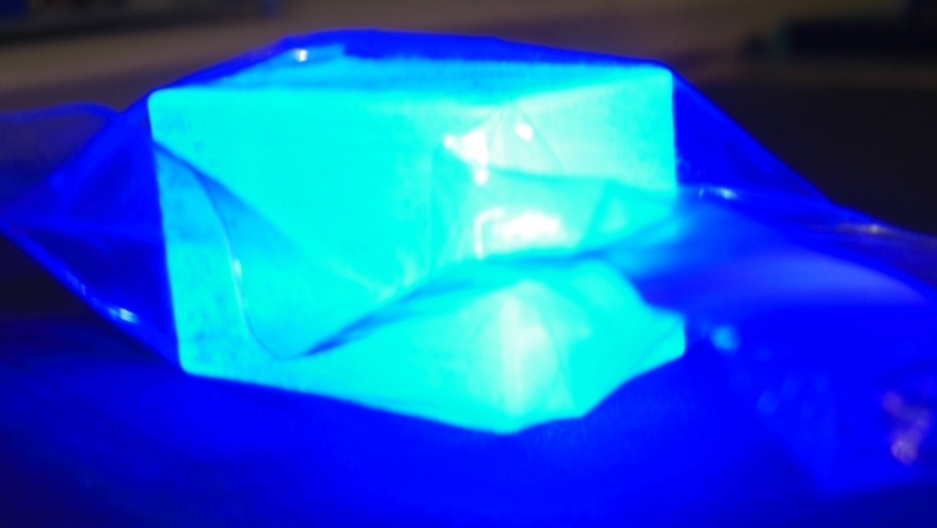 A particular type of UV light, shown here with a scintillator composed of plastics, could revolutionize the practices of flu prevention.

It’s an annual rite of fall and winter that everyone tries to avoid: flu season. This season, the influenza virus has been particularly brutal in the United States, claiming the lives of 84 children in the US alone.

A new study has recently come out could shed some new light — so to speak — on how to kill the flu bug before it has the ability to show up in your system.

The research, which was recently published in the journal Scientific Reports, showed a possible breakthrough in fending off airborne-mediated microbial diseases such as influenza simply by exposing the diseases to what is known as far-UVC light. The technique killed all strains equally with the same efficiency as conventional ultraviolet light.

UVC is one of three main types of ultraviolet rays produced by sunlight. UVA rays are the longest, followed by UVB and then UVC.

David Brenner, the director for the Center for Radiological Research at Columbia University, says that UVC, for the most part, does not reach humans because most of it gets absorbed in the upper atmosphere.

“UVC, in general, is a really, really good killer of microbes, bacteria and viruses. And that's been known for probably 100 years,” says Brenner, who is the corresponding author on the study. “So it certainly is a good technique for killing influenza virus. But there is a problem there. And the problem is that UV light, in general, is a health hazard.

“It causes skin cancer. It causes cataracts in our eyes. So you can use it in places where there are there are not people in empty rooms, but what we wanted to do is to use ultraviolet light in a setting where there are people around."

What Brenner and his colleagues found was that far-ultraviolet (far-UVC) light can't penetrate through the outer dead cell layer of skin or the tear layer on the surface of eyes — meaning the known carcinogenic and cataractogenic properties do not have any effects — but it did have the ability to reach bacteria and viruses.

Brenner adds that the microbiomes found on the skin to protect against germs — among other responsibilities — are no more affected than they are with our everyday activities such as washing our hands with antibacterial soap, taking showers and walking out into the sunlight.

“I think the far-UVC is going to do far less damage to the skin microbiomes than simply the things we do normally,” he says.

Although the study could help lead to the mass production of lamps that give off far-UVC light to purposely kill the flu bug and other airborne-mediated diseases, Brenner says that a number of things still happen before such a device hits the market.

The first requirement that has to be met, he says, is that its effectiveness has to be demonstrated further with additional studies. Secondly, Brenner and his colleagues must continue to demonstrate that the technique is safe.

“We started off by saying, ‘Well, the physics says in principle it's safe,’ but that's obviously not good enough,” Brenner says.

“So the last four or five years we've been working pretty intensively on safety studies both in human skin and mouse skin and also in the eyes. And the conclusion today at least is we have never seen any biological effects any biological damage from this far-UVC light. We always do the studies in parallel with a conventional germicidal lamp and there we always see biological damage."