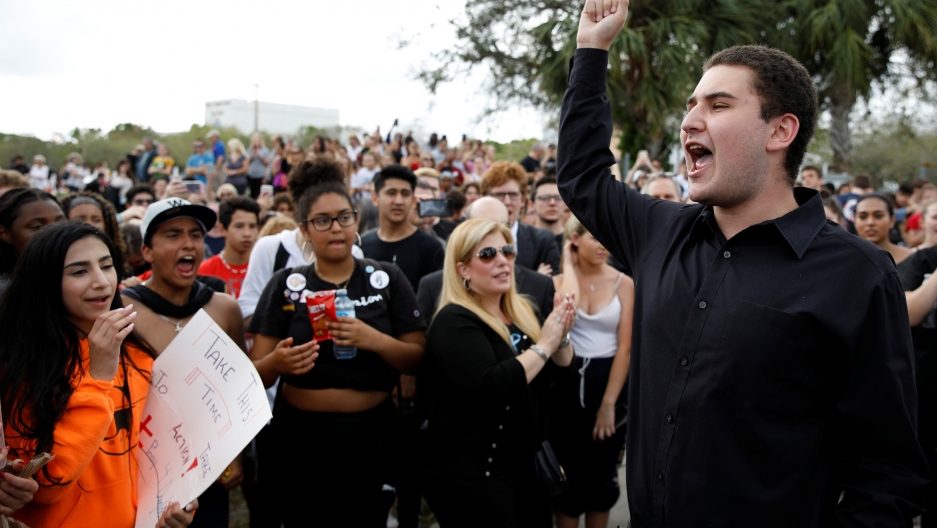 The mass shooting that left 17 people dead on Feb. 14 at Marjory Stoneman Douglas High School in Parkland, Florida, is still dominating headlines more than a week after the tragedy — and many of those headlines are overseas.

We spoke with two foreign correspondents based in the US about what it's like to cover mass shootings and gun rights for audiences overseas. Leila Macor reports from Miami for Agence France-Presse, and Estelita Carazzai is a Washington, DC-based correspondent for the Brazilian daily Folha de Sao Paulo.

Macor, who is from Venezuela, never imagined before moving to the US that she would wind up covering the aftermaths of 10 mass shootings in just five years. She said it’s like the movie “Groundhog Day,” with the same story happening over and over.

"[Foreign audiences] are feeling tired about hearing the same news over and over again, and they are actually not that interested, until we feel something else is happening,” she says.

Macor says something different does seem to be happening with the Parkland shooting.

“Now there is a lot more interest, because the Parkland kids have achieved something that I haven’t seen before," she says, "which is they managed to make the news cycle longer.”

Macor said she hopes interest will continue in this movement. Still, she said, the issue has been a tough one to cover.

“This is a very difficult concept to grasp for a reporter from abroad: Why people don’t take action against semi-automatic weapons being legally sold?”

She described Americans’ determination to hold onto their guns as “surreal.”

Carazzai said the response in Brazil to her social media post about the president’s remark was one of amazement: “It’s, ‘Oh my God, why are they thinking about it? Isn’t this enough, all these mass shootings year after year? And they’re still thinking about giving guns to people?’”

It’s not that Brazilians are unfamiliar with gun violence, but Carazzai says the outlook on guns is different, and Brazil has very strict gun laws. “We do have gun violence in Brazil,” she said, “but it’s much more related to poverty and [unemployment] and urban criminality than the fact that people have access to guns.”

Carazzai said she’s looking forward to covering the March for Our Lives in DC next month.

For more on how people overseas are thinking about the US gun debate, listen to the interview with host Marco Werman above.