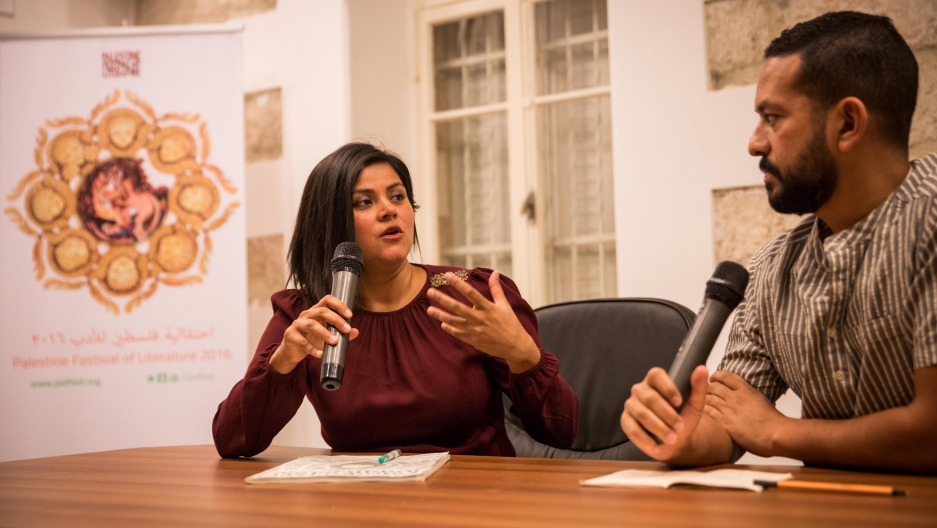 Bhakti Shringarpure is the editor-in-chief of Warscapes — an independent online magazine that aims to challenge the mainstream understanding of war, the roots of war and the people who live in these spaces.

It provides a lens into current conflicts via fiction and nonfiction pieces, book and film reviews — and showcasing writing from war-torn areas.

Bhakti is also an assistant professor of English at the University of Connecticut, a translator and book editor. She says she wants to expose the myth that history "sort of came to a standstill after World War II."

How was Warscapes born and how has it evolved?

Warscapes was the name of my Ph.D. dissertation, and at that time I was doing a lot of research on war novels that had been completely overlooked in Western, mainstream spaces.

The cultural production about the two European world wars completely masks the fact that there are over 250 conflicts that have taken place since, some with staggering death tolls and a lot of these have come out of the Cold War and its many violent proxy confrontations all across the global south. Secondly, the only wars that get any attention are those that feed into US and European geopolitical interests.

My first motivation with Warscapes was to problematize the mainstream understanding of war, not simply as journalistic dispatches or military history or policy documents, but as something deeply rooted in colonial logics and colonial legacies. I also wanted to emphasize literature, art, poetry, along with reportage and other cultural production about war because unless you have a 360-degree view of this phenomenon, we cannot understand, really, why conflicts are taking place and, more importantly, how we can end them.

How do you see through “feminism-lite” and nurture feminism you believe in?

I am very much opposed to feminism-lite and right now you see this tendency everywhere. There is a desperate need to proclaim feminism as cool and trendy, but all the while there is also a desire to limit feminist discourse by claiming it’s about personal choice.

If you're a feminist, then all these personal choices should somehow be honored. Well, absolutely not. Feminism is fundamentally communal and fundamentally bellicose in how it resists white heterosexist patriarchy. A T-shirt does not solve the problem. Nor does it help to submit to consumer-obsessed celebrity versions of feminism, which are primarily interested in selling you stuff and are not really invested in issues of the economic, social or political justice.

Which interviews have impacted you the most, and why?

It was kind of amazing to do long, three-session interviews with Mahmood Mamdani, a prominent political theorist [and commentator]. It certainly gave me a more holistic sense of how African wars and events are shaped and disseminated by media in the West.

It was also incredible to do an interview in Paris with exiled Iranian cartoonist Mana Neyestani. He had been through so much and usually people in his situation end up submitting to the notion of “a free West and the tyrannical Rest”. He had the capacity to navigate through so much of the hypocrisy around free speech and humanitarian work in Europe while being staunchly critical of the Iranian system that mistreated, censored and maligned him.

What have you learned from (or about) collaboration through your work on Warscapes?

I think small, independent entities like Warscapes thrive on collaboration and solidarity. I have been grateful for how many opportunities I've had to work on, for having so much amazing content and for the trust that has been put in me time and time again.

We are in a very big media moment because of the culture of the Internet and the shameless market logic that it operates on. Small initiatives like Warscapes cannot sustain and continue to do good work unless it is part of supportive and politically intense network.

We are now coming out with our first print book on refugees and migrants crossing the Mediterranean Sea. This was made possible because of our partnership with UpSet Press in Brooklyn. We also had to rely on several networks in Europe to get exciting and unique content. Our outreach will depend upon the same kind of collaborative energy.

How do you take care of your psyche while actively engaging in conversations about post-colonial violence and war on a daily basis?

Honestly, I don't know if I take any actual care of my psyche, but I should. I have two kids and ridiculous book deadlines. I rarely read anything or teach anything that’s not actually related to those themes — and I end up watching TV shows, which these days are often extremely violent too.

I've inadvertently stumbled on some nice activities — perhaps because I live in a rural part of Connecticut. I've recently started growing vegetables and, I know its a serious cliché but, working in the garden can be very soothing. And I'll say I'm rather pleased with my amazing crop of tomatoes, carrots, salad, etc. this past autumn.

If you had your own media platform — of any format — and money wasn’t an issue, what would the content of your top five programs be?

Well, my first program would be a "Food and Empire" show, which would reveal the ways in which the politics of food are imbricated within issues of race, hierarchies, gender, migration, war and so on. The rest of it would include a fleet of awesome, non-white, non-American and non-European shows ranging from comedy to drama to mystery and romance.

Check back here over the next few weeks to read other interviews in our series, "The Media Disruptors," with:

Christabel Nsiah-Buadi is the creator and Editor of “The Media Disruptors” and a public media producer. She also writes about the media, culture and politics. You can follow her on Twitter: @msama