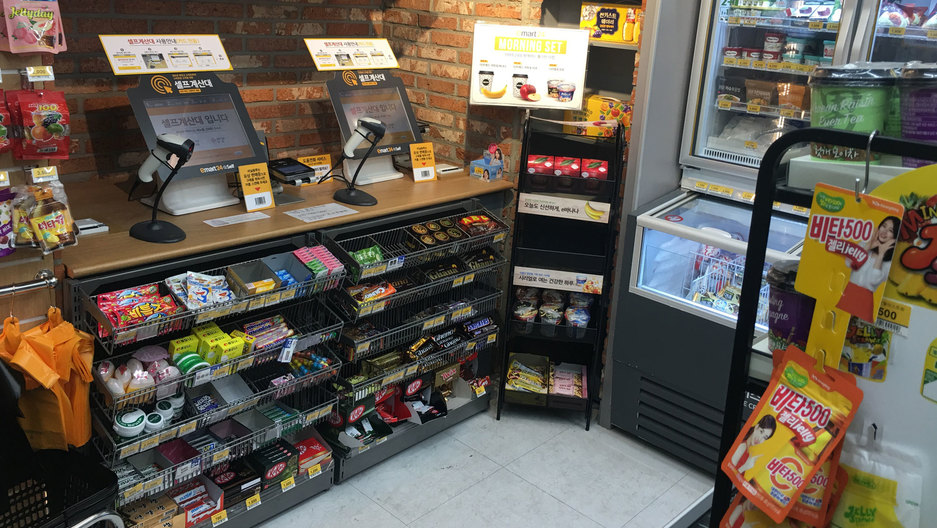 Self-service kiosks replace staff at the checkout counter at an unmanned convenience store in Seoul.

No one is there to greet customers as they enter the shop, which would be silent if it weren’t for the hum of refrigerators and the piped music that emanates from speakers on the ceiling.

This business, located in the basement of a hotel in downtown Seoul, has no clerk working behind the counter. Instead, a self-service kiosk verbally instructs shoppers to check out by swiping their purchases under a barcode reader and pay with a credit card.

Automation has arrived in one of South Korea’s most cherished institutions — the convenience store.

There are an estimated 35,000 such retailers nationwide, giving the country of 51 million one of the world’s highest human-to-convenience-store ratios. Dozens of competing franchises can be found in any given Seoul neighborhood; they stay open around the clock and generally offer similar products, such as instant ramen noodles and triangle-shaped kimbap (rice wrapped in seaweed), as well as an abundant selection of beer and soju.

Alcoholic beverages are not sold in this unmanned store, which is operated by E-Mart 24, one of a handful of local retailers that have recently opened clerkless shops. Another difference between this kind of store and staffed ones is the credit card-only cigarette vending machine. 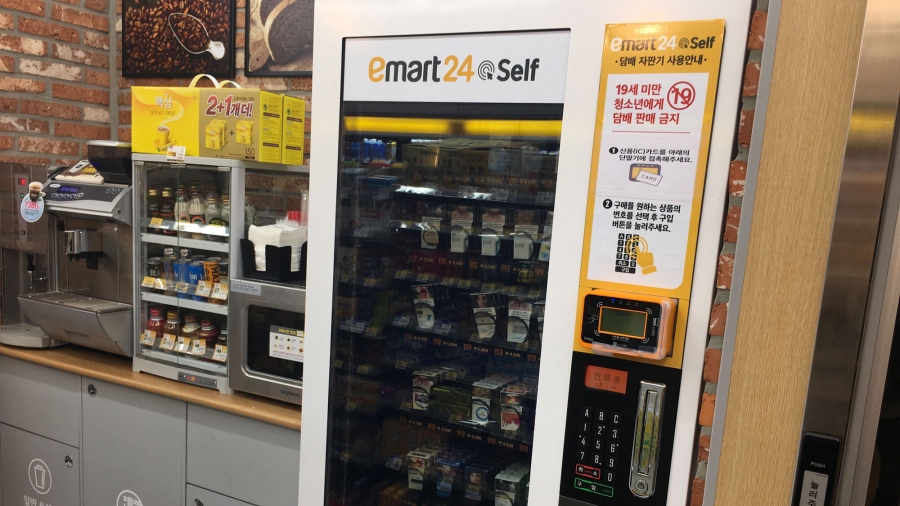 Cigarettes are for sale inside a credit card-only vending machine in an unmanned shop in Seoul.

The absence of these staples surprised Kim Dong-hyun, who used to work part-time at a convenience store.

“I used to work the graveyard shift Saturdays to Sundays and beer and cigarettes sold twice as much,” the 33-year-old said while inspecting the beverage selection at the automated shop, which requires customers to insert a credit card at the entrance in order for its sliding glass door to open.

Because of their ubiquity and 24-hour schedules, convenience stores have been a reliable employer of teenagers, retirees and other job-seekers who, for various circumstances, have difficulty finding work. But after South Korea’s minimum wage rose this year to 7,531 won ($6.95) per hour, reports say restaurant and other small-business owners are laying off staff.

Some bosses are replacing their employees with computerized ordering and checkout systems.

Kim, who lost his convenience store job prior to the wage increase, says his former co-workers knew that automation was going “to be the future” and started to look for work elsewhere.

Lim Soo-bin, an E-Mart spokesperson, writes in an email that because the company’s staff-less branches still require some “hands-on” work between customers and employees, “it's not realistic to say these stores are taking away jobs."

A sign outside the underground E-Mart 24 indicates that staff visit the location every morning for a few hours and can make exchanges.

“The stores are more efficient because customers save time by completing the purchases themselves,” Lim adds.

John Lee, who runs a convenience store on the ground floor of an apartment complex outside of Seoul, says he also sees the benefits of an automated system: He would not have to pay overtime or depend on unreliable workers, he explains.

Due to the recent wage hike, Lee says he’s had to let go of employees and now puts in 12 hours a day at the counter himself. While replacing staff with a kiosk would help his bottom line in the long run, Lee says he’s not willing to make the switch now because of the competition in this industry.

He says the only reason why a person goes to one particular convenience store over another is thanks to the “special relationship” that customers feel they have with a clerk — one that can be formed by the employee asking how the kids are or knowing what brand of cigarettes the customer smokes.

“If you walk into a store and there’s no one else except a cash register and you pick up something and scan it yourself and pay for it, well, that’s not so personal anymore,” Lee says.

A previous version of this story misstated Kim Dong-hyun's age.