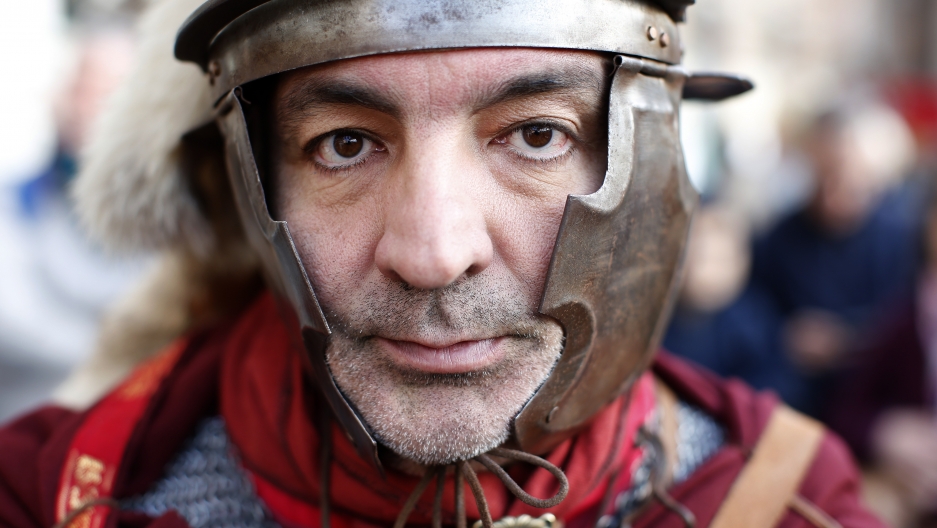 A member of Roman historical society "Gruppo Storico Romano" poses as Julius Caesar in a re-enactment. Two British towns that have claimed to be the site of Caesar's landing in 55 B.C. may not be the actual location, according to new research.

The county of Kent in southern England is a fairly peaceful place today — think rolling fields, cozy pubs and picturesque beaches. But it wasn’t always this way.

More than 2,000 years ago something terrible and violent happened here, near the present-day seaside villages of Deal and Walmer. In 55 B.C., it is believed that Julius Caesar’s forces made their first landing in Britain on the beach here, part of a project to push beyond the boundaries of the known world and claim new territory for Rome.

Caesar’s own account of the initial attack survives. It shows in extraordinary detail how the expedition developed, and the resistance his forces encountered from Kentish warriors. At one point, he describes a moment of hesitation as his troops wait in their boats just offshore, watched by the British forces on the beach. The stalemate ends when the eagle-bearer of the 10th Legion leaps from his boat and charges up the beach into battle — the first recorded event in British history.

That turning point is something local people in Deal and Walmer are keen to remember. There’s a large concrete memorial to Julius Caesar on the beach at Deal and Walmer. There has also been a long-running campaign for a "diorama" to be built on the beach: a parade of life-size statues showing the invading legionaries grappling with ancient British fighters.

But, recently, another battle has emerged. A battle over whether any of this happened here at all.

According to new research from a team led by Andrew Fitzpatrick of the University of Leicester, the invasion could not have happened at Deal and Walmer. It had to have been further north, nearer to present-day Pegwell Bay. Fitzpatrick says Caesar’s own account of the invasion does not match the coastal geography of that time. The nature of the coast would have made it impossible for British and Roman fighters to have grappled in the shallows, as Caesar describes. He and his team have also uncovered the preserved remains of a fort built by Roman forces a short way inland, which also points to a landing point a few miles north, at a place called Pegwell Bay.

Not everyone is prepared to accept the new findings. Plans for the beach diorama are still underway on the old beach, although funding is still being sought. Peter Jull, a local councilor who has campaigned to raise money for the statues, believes there is no need to change the location.

Would he agree to disagree with Fitzpatrick's team?

"I would agree that they are wrong and I'm right," he says. "I agree with Julius Caesar."