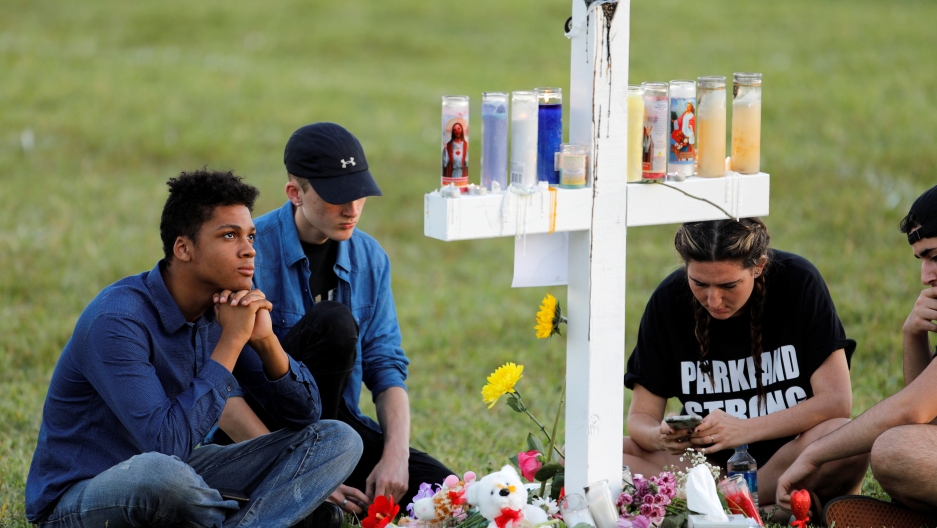 Mourners sit around one of 17 crosses at a memorial for the victims of the shooting at Marjory Stoneman Douglas High School in Parkland, Florida, Feb. 16, 2018. Russian bots flooded Twitter in the wake of the shooting to amplify antagonism in the debate over gun control.

After every high-casualty mass shooting, there's a lot of heated political debate over how to interpret what happened and how to prevent the next one. The Parkland, Florida, tragedy is no exception, except that these days, the debates come with a steroid boost in the form of tweets that divide Americans even further.

Griffith reports that there was an upswing in bot activity on Twitter in the wake of the Parkland shooting, where the political bots used shooting-related hashtags to amplify messages. She says in the piece:

Bret Schafer, a research analyst with the Alliance for Securing Democracy, says the spike in shooting-related posts from Russia-linked bots is in line with what his group observed after last year's shootings in Las Vegas and Texas. The Russia-linked bots weigh in on any attention-grabbing news event, but seize on shootings particularly. "Because of the politicized nature of them, they are perfect fodder to take an extreme position and start spreading memes that have a very distinct political position on gun control," he says.

Griffith says there's a "feedback loop," in which humans retweet messages they don’t realize are bot-generated, making it particularly hard to detect "who’s real and who’s not."

"[There] are plenty of pro-gun advocates out there that are tweeting about this as well," she says, "but the problem is that the Russian influence campaigns are trying to get people's attention to then slip in messages that are more directly related to the Kremlin's agenda in hopes that real people will then spread them."

Griffith says social media consumers should be more careful. "We’re always skeptical of things we don’t agree with," she says, "but when we see something that we really strongly agree with or that confirms our existing beliefs, that’s when it’s most important, I think, to examine the source of that information."

To hear more of Erin Griffith's interview, listen to the audio above.