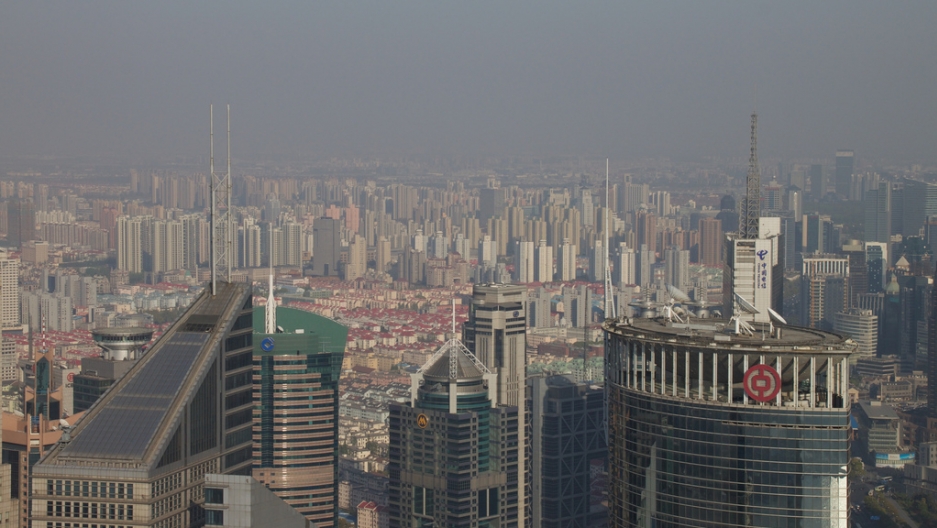 For years, Shanghai has featured some of China's worst air pollution. Recent initiatives by the Chinese government, though, have begun to clean up some of the problem.

For years, China has been associated with dirty, smog-filled air — so much so that it has become custom for some hotels to give guests complementary masks. Recently, though, the country has started making large strides to clear the air.

While President Donald Trump's administration has moved to cut the US government’s clean energy budgets by up to 70 percent, China has been steadily moving in the opposite direction by exploring alternatives, including an increase in electric cars and installing more wind power facilities than the other top three wind leaders combined (the US, Germany and India). The Chinese have even built the world’s largest floating solar farm west of Shanghai on a lake that used to be the site of a coal mine.

“They have declared a war on air pollution and they've committed China to peaking their carbon dioxide emissions by 2030 or sooner,” says Denise Mauzerall, a professor of environmental engineering and international affairs at Princeton University. “In fact, if you look at the CO2 emissions from China over the last few years they've actually been fairly constant. They grew extraordinarily fast over the previous decade or so and surpassed the United States as the largest emitter in 2006, but they're flat now.”

Mauzerall recently returned from a trip to China. She says that she overheard a lot of discussion about whether the country has already peaked on its CO2 emissions or if there will be further increases as the economy continues to grow.

She spent the majority of her time in Beijing, the capital city that has gained notoriety for a lack of visibility due to polluted air, mostly from coal plants. She noticed a “huge improvement” in quality of the air.

“I've been in China starting back as far as 1990 and in the previous 10 years, and I've been there, the air pollution has been so bad that you could often not see across the street clearly and two blocks away would be blurred out by the air pollution,” she says. “This trip ... you could easily see 10 miles. You could see the mountains that I had never been able to see from downtown before."

Mauzerall says there are several possible factors for the better air quality. Those include the government reducing the use of coal in small stoves used for heating in residential areas and stricter emissions standards for vehicles and power plants. Mother Nature has also been helping out with a steady stream of clean air coming off the Arctic down from Siberia as opposed to the more traditional delivery of dirty air from southern China.

The Chinese already buy more new vehicles than Americans do, which is why tailpipe exhaust still accounts for a large percentage of pollution in the major urban areas. Yet the country has made a large commitment to electric vehicles, says Fred Beach, assistant director for energy policy at the Energy Institute at the University of Texas at Austin. Beach has visited several Chinese automakers over the years to keep tabs on their collective direction.

“I think they realize they need to electrify transportation to help mitigate their pollution problem going forward and somewhat like solar [photovoltaic panels],” Beach says. “I think they want to kind of own that market space. As the world in general goes that way I think they want to get ahead of the curve and be one of the leading suppliers globally and for themselves.”

The overall target for automakers in China is to have a million electric vehicles produced by this year and seven million by 2025, says Mauzerall, who adds that she saw a surge in charging stations throughout the country on her most recent visit, most of which could be used with a cell phone app.

The Trump administration recently placed a 30 percent tariff on solar panels manufactured in China. A few years ago, when panels were more cost-intensive, this would have been a bigger issue. As it stands now, the current price of panels takes the market back to the prices of 2016, Mauzerall says.

“The perspective over there is that the world is their market and they're there looking outwards right now and they say that the US is less important to them than we might think it might be and that they'll be fine,” she says.

Beach points out the irony that Americans can still get a 30 percent tax credit on solar panel installations.

Not all of China’s new energy plans are being hailed by the outside world. The country is one of few with active plans to build new nuclear power plants — in spite of concerns of radioactive waste and possible national security issues. The decision to ultimately follow through on those plans will be made from the highest level of government in the next couple of months, Mauzerall says.

“There are certainly people there who see nuclear as a clean-air pollution and CO2-free form of electricity despite its drawbacks,” she says.

Compared to the Trump administration’s plans to try to bolster the fossil fuels industry, China’s emphasis on promoting alternative and renewable forms of energy falls in line with the majority of the other world leaders, Beach says.

“They understand the value of research and development and a lot of the money for that often does come from the government as opposed to the private sector,” he says. “So I would say at the moment if I had to characterize the [US and China] I'd say they got it right. We're about to perhaps get it wrong."

Adds Mauzerall: “I fear that the plans to cut funding for renewable energy research and development is a major disadvantage to long-term prospects in the US because China will move in and we will be left behind."