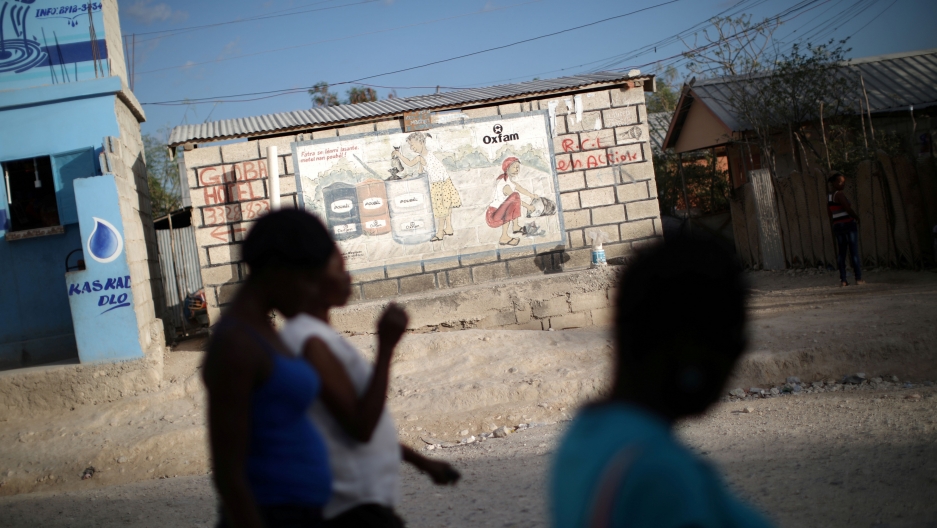 Women walk past an Oxfam sign in Corail, a camp for displaced people of the 2010 earthquake, on the outskirts of Port-au-Prince, Haiti, Feb. 13, 2018.

Editor's note: This piece's author, Amy Costello, is reporting on aid workers' experiences with sexual harassment and abuse. She would like to hear from you. Call us at 857-285-4157 and leave a confidential message.

The famed British charity, Oxfam, has been under intense scrutiny ever since it was reported that one of its country directors, Roland van Hauwermeiren, hired prostitutes in the aftermath of the 2010 earthquake in Haiti.

What’s more, it appears that Oxfam knew that van Hauwermeiren and his colleague had engaged in similar conduct years before, when both men worked in Chad and Liberia. Even so, Oxfam gave the pair senior roles in Haiti.

The fallout for Britain's beloved charity has been significant and swift and only appears to be gathering steam.

Oxfam’s deputy chief executive, Penny Lawrence, resigned on Monday, saying she was “desperately sorry for the harm and distress that this has caused to Oxfam's supporters, the wider development sector and most of all the vulnerable people who trusted us.”

The UK’s Charity Commission also started a statutory inquiry into Oxfam, citing concerns that it might not have “fully and frankly disclosed” important details about what transpired in Haiti and how it handled matters afterward.

As other aid groups watch a powerful tide of scrutiny moving across its sector, they are beginning to buckle. Doctors Without Borders came out proactively with its own accounts of abuse, announcing this week that it had acted on 24 cases of harassment or sexual abuse last year and fired 19 employees as a result.

But it’s important to note that sexual abuse in the aid sector is not new. In fact, it has tainted the otherwise good work of the humanitarian sector for decades.

Allegations of sexual abuse have existed at least since the 1990s when the United Nations sent peacekeepers to Cambodia. In West Africa in 2002, widespread sexual abuse of children by relief workers was reported by the UN’s Office of Internal Oversight Services. In places like Guinea, Liberia and Sierra Leone, refugee children were given things like school fees in return for sexual favors.

But the abuse did not stop there, despite full knowledge that it was a widespread problem.

In 2008, Save the Children reported that UN peacekeepers were offering food to children in Haiti in return for sex. As recently as November last year, the UN reported 31 new allegations of sexual abuse and exploitation against peacekeepers and civilians working for UN agencies. This occurred in just a three-month period.

One of the main reasons why this kind of behavior flourishes in humanitarian settings is due to the gross power imbalances that exist in any crisis zone. You have aid workers going into places where there is often not enough food, water or shelter. Local populations are desperate and therefore unempowered. Aid workers and UN peacekeepers take advantage of this imbalance.

I saw it with my own eyes when I reported on this issue for The World from West Africa more than a decade ago. In Sierra Leone, I witnessed a thriving prostitution trade within blocks of UN Peacekeeping headquarters, prostitutes riding around in official UN vehicles, and I interviewed a prostitute who told me she started selling herself to peacekeepers when she was 14 because her mother had no money.

And when sexual abuse like this occurs, who should a refugee, a hungry person or child report to? Given the precarious lives of these populations, it’s likely they will not report. This is one of the many reasons why we know so little about the scope of this problem.

However, it’s important to note that most aid workers across the globe are likely not exploiting local populations, and many aid workers working in crisis zones today are women from developing nations.

In London, the British government is now threatening to cut funding to Oxfam. If other organizations around the world meet similar fates, it will severely hamper the ability of aid groups and their international staff to carry out their important, sometimes life-saving work.

So what to do? Speaking plainly about sexual abuse and harassment in the humanitarian aid sector is long overdue. Reform is needed, and it will occur.

In the meantime, we must balance our outrage and concern with the ongoing needs of people around the world who rely on a sector that is already underfunded and stretched too thin. It’s unlikely that cutting aid budgets will improve the lives of people around the globe. In fact, slashing budgets now will likely cause them direct harm, just the way sexual abuse has, only on a much greater scale.