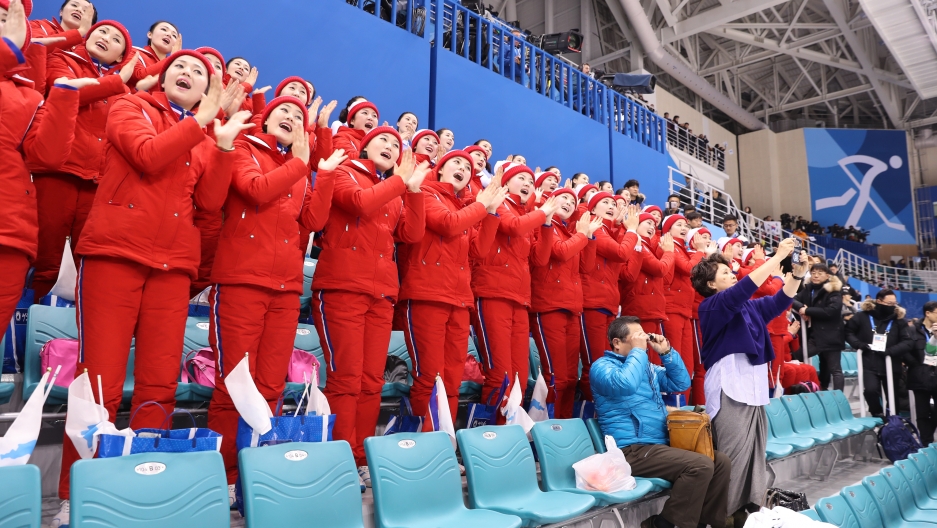 In their final Olympic appearance, the joint Korean women’s ice hockey team got off to a bad start, giving up two goals to Japan in just the first few minutes. They went on to lose 4-1, with Korean American Randi Heesoo Griffin scoring the team’s only goal of the Olympics.

For the few dozen spectators that had gathered to watch the televised match on a big screen setup in downtown Seoul, the defeats are nothing to be ashamed of. Formed just a few weeks ahead of the 2018 Pyeongchang winter games, that the team comprised of 23 South Korean and 12 North Korean players was in itself a miracle.

“They had some difficulties because they didn’t know each other and needed more time" to practice, says a woman, who only gave her surname Park. But she hopes the team does more than just score one goal — saying she hoped it was a "first step toward peace” on the divided peninsula.

Following a year in which North Korea and the United States engaged in a battle to see who could pledge the worst form of annihilation, the Olympics have provided a rare interruption to the tensions. In January, Seoul and Pyongyang agreed to jointly enter the games' opening ceremony and field the unified women’s ice hockey team — the first Olympic team to consist of athletes from both countries.

The abrupt addition of the North Korean athletes to an otherwise scrappy South Korean lineup initially caused a backlash. Surveys showed low public support for the combined team and tens of thousands of online petitions were sent to President Moon Jae-in, urging him to call off his deal with North Korean regime. But after the successful opening ceremony — and a valiant effort by the players to overcome their cultural, linguistic and political differences — many South Koreans have warmed up to the underdog team.

“At first, I didn’t like the unified team — it was so sudden. But now I think it was a good idea,” Park says.

Lee Sang-yoon let out small cheers and pumped his fist at some of the more upbeat moments during the game. The 32-year-old office worker says he also was initially opposed to the unified team and “didn’t want politics to interfere with the games.”

In the end, he noted the team did the best it could.

"There’s a great deal of sympathy for the unified team. They’ve showed a good fighting spirit,” says Bong Young-shik, a political analyst with the Asan Institute for Policy Studies in Seoul, adding that anger over the government's decision to unify the team without first consulting the players or coaches has had little impact on the public’s desire to cheer on the athletes.

Ice hockey is not a widely popular sport in South Korea and expectations were low for the country's women’s team, which is ranked 22nd worldwide, but they wound up attracting the most global attention of any team during the first week of the winter games. Spectators quickly bought up tickets for all three games.

During the matches, some fans waved the unified Korean flag, a white banner with a blue Korean peninsula at its center, that was carried during the opening ceremony and raised at the start of each Korean women’s hockey game. Other spectators chanted and held signs saying “We Are One."

Nearly 200 North Korean cheerleaders also attended the games. All were dressed in red overcoats and swayed in unison, making synchronized hand and facial gestures as they sang about reunification — a seemingly odd juxtaposition with South Korean cheerleaders who were simultaneously dancing to K-pop numbers that blasted over the venue’s loud speakers.

But, at the very least, Bong says by forming a unified hockey team and inviting North Korea to send its other athletes, cheerleaders and musicians to Pyeongchang, "South Koreans are feeling relieved” they don’t have to worry about Pyongyang’s provocations and can enjoy the Olympic games.