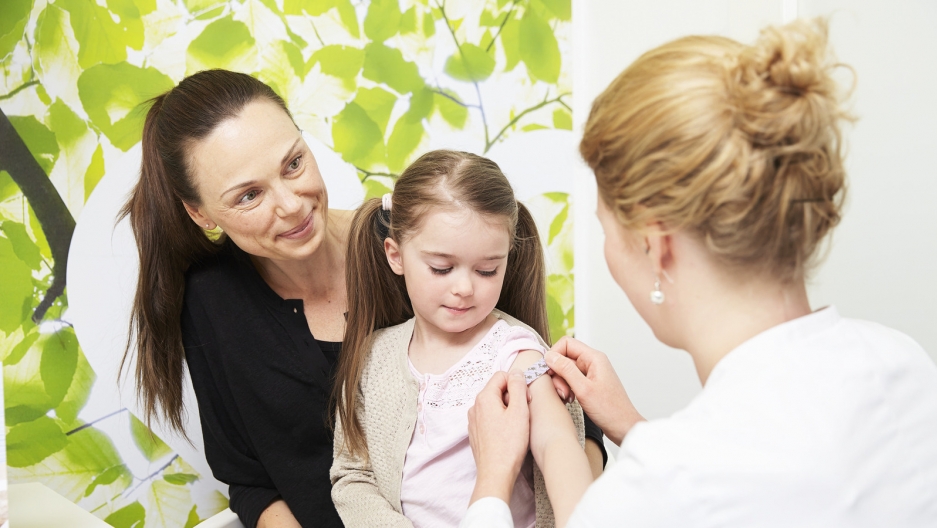 The percentage of parents who refuse to give any vaccines to their children remain at one to two percent of the general public. There is a much larger group of people who have doubts and concerns over certain vaccinations, experts say.

In spite of a request from the director of Centers for Disease Control (CDC) for Americans to get vaccinated, only 40 percent of the US population had received the flu vaccination by November. With 53 US children having died from the flu this season alone, a statistic like this one begs the question: Are the other 60 percent too busy to get flu shots or just not interested overall because of perceived health concerns and side effects on them and their children?

In the past, about 10 to 15 percent of parents have refused to give their children one or more vaccines, says Amanda Dempsey, an associate professor of pediatrics at the University of Colorado-Denver.

Over the past decades, though, that number has grown from somewhere between the 25 to 35 percentiles who are refusing at least one vaccine. The 1 to 2 percent who refuse to give any vaccines to their children has been pretty steady the whole time, Dempsey says.

Dempsey says there are three main reasons people — or their children — don’t get vaccinated: concerns about the safety of vaccines, beliefs that the vaccines are not necessary and being too busy to schedule a time to stop by a doctor’s office or clinic.

As a spinoff of that first reason, Dempsey says there is another considerable group of people who believe that the vaccines themselves may be safe, but object to the bundling that often takes place, such as at regular checkups for newborns and infants — and prefer to have them spread out.

"I think what a lot of people don't realize is that actually the vaccines that people who are now the age of parents might have gotten when they were children were actually manufactured in such a way that they were getting way more antigens in those vaccines 20, 30 years ago,” Dempsey says. “So even though there's an increased number of vaccines — meaning more shots going into arms in this day and age — they're produced in such a way that the number of antigens that are being introduced is actually less than what we got before."

Gretchen Chapman, a professor of psychology at Carnegie Mellon University, has focused much of her research on the psychological processes involved with policy-relevant interventions such as vaccinations and blood donations. She says by in large physician recommendations are one of the strongest predictors of vaccination behavior.

A recent study her team completed shows the power, in particular, of what is known as presumptive recommendation, where a physician says when a child is due for a vaccine and tells the parent when that vaccine will be given during a particular visit. This proved to be much more effective than a discussive recommendation, she says.

“So it creates the attitude that ‘Of, course we're going to do this’ and then the parent has to jump in and say, ‘Wait, wait, wait … I'm not sure I want to do this’ if they don't want to do it,” Chapman says.

Dempsey was part of a team that introduced a physician communication toolkit for a study that looked specifically at getting patients to get the HPV vaccine. Presumptive recommendation was a core tool of the kit, as was something called motivational interviewing, which is “a way of framing a conversation as a communication technique where you try to actively reduce people's barriers to hearing information that might be slightly different than what they think their beliefs are and try to use people's own inherent motivation for making healthy behavior decisions.”

By primarily using motivational interviewing, Dempsey says that her team was able to teach providers to have more effective conservations about the HPV vaccine — and increase HPV vaccination rates in the process.

Chapman says that making vaccines an easy action to take can be very effective when it comes to fostering vaccination rates, especially among people who have a positive attitude towards vaccines but do not make getting them their top priority.

Although there is a growing number of vaccination skeptics, Dempsey says that is important to realize the number of people who are completely against them remains very small by comparison to those who are open to receiving them. There is, though, a large group of people who have serious doubts and concerns about vaccines. These sentiments, she says, are often heavily influenced by stories in the media.

“I think what ends up happening in the media a lot is that the newsworthy stories are the stories about the people who are strongly against vaccines,” Dempsey says. “So, it appears to the general public that maybe this is way more common than it actually is. We don't hear a lot of stories about people who are supportive of vaccines who got their children vaccinated and were happy to do so. And I think it really it tends to undermine the message about how normative that behavior actually is."

“Vaccines by definition just aren't much of a story,” Chapman adds. “If a vaccination goes as planned the person gets vaccinated. There are no side effects and they don't get sick, so absolutely nothing happens. It's a really boring story, but that's what we want."

This article is based on an interview on PRI’s Science Friday with Ira Flatow, as part of the program’s “Science Facts” series. To continue this discussion around the dinner table, a corresponding page featuring numerous facts about vaccines can be found here.