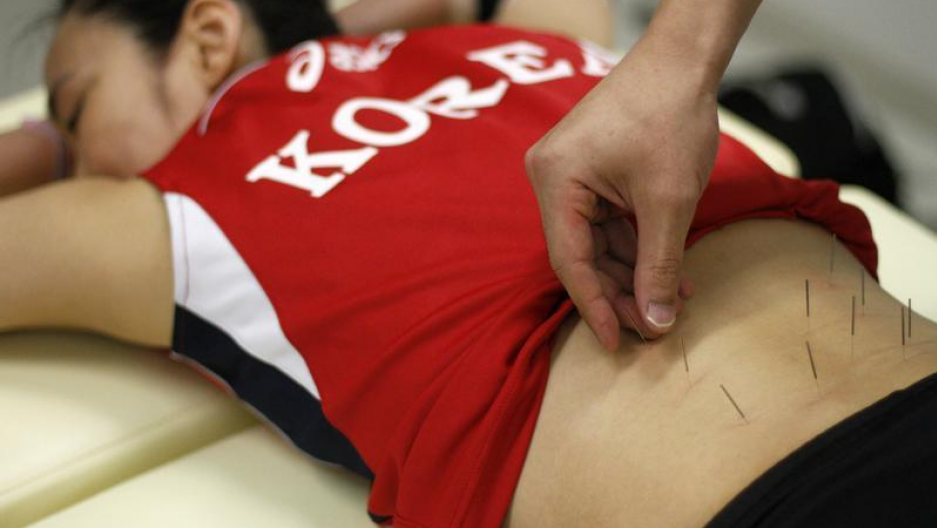 Every two years, billions of people watch athletes at the Olympics compete to be crowned world champion.

What the viewer doesn’t see is the athletes’ behind-the-scenes preparation, which includes trying to figure out new ways to give them an edge in the biggest event of their career.

Different treatment methods that may provide an edge always seem to be in vogue. During the Beijing Summer Olympics, volleyballer Kerri Walsh-Jennings introduced viewers to kinesio tape — sticky strips applied to the body that may improve blood flow. At Rio, the large purple dots on the shoulders of swimmer Michael Phelps had fans Googling “cupping,” an ancient Chinese healing therapy.

Both examples indicate a willingness among athletes to incorporate Eastern treatments with traditional Western training and treatment methods.

As an athletic trainer who has worked with college athletes, I’ve used many Western training techniques to aid injured athletes. But during my 15 years of practice, I’ve started to wonder if many of the techniques I’ve used are truly effective.

With this year’s Winter Olympics taking place in Pyeongchang, South Korea, it wouldn’t be surprising to see athletes talking about other Eastern treatment methods — acupuncture, herbal treatments and Chuna manual therapy — that have become increasingly popular around the world.

Going after the pain

In Western cultures, athletic trainers and therapists who treat injuries have traditionally focused on controlling pain and inflammation.

A common treatment for acute injuries is the RICE method: rest, ice, compression and elevation. The RICE method works by preventing the development of inflammation. With less inflammation present, less pain is felt and less swelling develops, and the athlete will return to normal function more quickly.

Ice, of course, has been used for decades. It is one of the most commonly prescribed treatment methods for acute and chronic injuries in the United States. But the use of frigid temperatures to treat injuries now includes whole-body cryotherapy — chambers that expose the entire body to temperatures ranging from minus 100 to 140 degrees Celsius, with the idea that treating pain and swelling throughout the entire body works better than paying attention to a localized spot.

But even though most Americans probably use ice as their go-to method for controlling pain and swelling, current research doesn’t fully back its effectiveness.

Evidence is often mixed or lacking for many other common Western sports medicine treatments. Transcutaneous electrical nerve stimulation (TENS) is a form of electrical stimulation therapy that can help reduce pain following an injury. In this treatment, currents are used to stimulate nerves and decrease pain. While some research suggests that it’s effective, it, too, needs additional support to truly strengthen this conclusion. Meanwhile, therapeutic ultrasound uses sound waves to generate heat, which is supposed to quicken healing. But again, the research on its effectiveness is inconclusive.

Korean athletic trainers, on the other hand, tend to utilize traditional Chinese medicine (TCM), though they’ll also incorporate treatments from their own culture and from Western medicine.

Unlike ice treatments, most Eastern techniques involve stimulating the body’s normal responses to injuries in order to promote natural healing. For example, traditional Chinese acupuncture is based on the idea of stimulating the body’s “qi,” or energy, to restore balance within the body (what’s called the “yin and yang”). Studies have shown that following the insertion of a needle, neurotransmitters do get activated that help alleviate pain.

Meanwhile, cupping therapy — a practice that may be 3,000 years old — involves placing heated cups on the skin, which creates a strong suction force that leads to bruising. The increased blood flow to the affected areas is thought to stimulate healing and muscle relaxation.

Only in the 1990s did researchers start to evaluate the effectiveness of South Korean sports medicine treatments. However, as with studies of Western treatments, their reviews didn’t arrive at any definitive conclusions.

This was the dilemma I faced many times in my own practice. The field of sports medicine often incorporates emerging treatments that aren’t proven to work. But the fact that Olympic athletes are willing to try them shows that they’re willing to tinker with their bodies and take risks that could give them the slightest advantage, physical or mental.

As for the larger question of which treatments — Eastern or Western — are most effective, the research might not be crystal clear, but the medal counts might offer some clues.