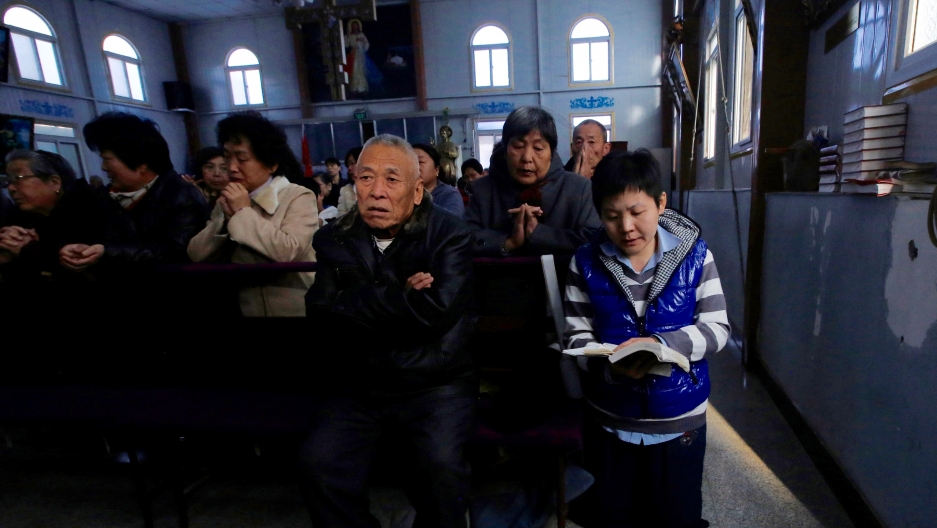 Believers take part in a weekend service at an underground Catholic church in the Chinese city of Tianjin on Nov. 10, 2013.

In China, millions of Catholics go to church every week. And when they do, around half of them are breaking the law.

That’s because many Catholic churches in the People’s Republic of China operate in a legal gray area. These so-called underground churches are not registered with the official Chinese government bureau that oversees religious affairs, and neither are the Catholic bishops and the priests who preside over them.

The underground Catholic churches — there are underground Protestant churches in China, too — present a problem, not just for the Vatican, but for the Chinese government, too.

Both Pope Francis and the ruling Chinese Communist Party under President Xi Jinping have an interest in bringing these underground Catholics out of the shadows.

But they have very different reasons why.

The Vatican has centuries of experience in China. It was Jesuit priests who first established a permanent place for Christianity in China starting in the 16th century. Francis is the first Jesuit to become pope, and he appears eager to heal the divide running through Catholicism in China by normalizing relations between the Vatican and Beijing.

Those diplomatic ties were severed in 1951, soon after the communists took control of the mainland. Life for Chinese Catholics has been complicated, to say the least, ever since. For the Chinese government, re-establishing diplomatic relations with the Vatican would be a victory for public diplomacy. But the real motivation for Xi and his government is about social control, says Ian Johnson.

“Beijing just issued new regulations on religion that call for even tighter control on religion,” says Johnson, author of “The Souls of China: The Return of Religion After Mao.”

“This is not really a socially reform-minded administration that’s willing to open up or take a gamble. I think if a deal presents itself, that’s great. They’ll do it. But if not, they’re probably happy to walk away.”

Another attractive possibility for Beijing in all this is related to Taiwan, which China considers a renegade province. The Holy See is one of just 20 states with diplomatic ties to Taiwan. If normalizing the relationship with mainland China coincided with breaking the Vatican’s recognition of Taiwan, that would be something Xi could celebrate.

For his part, Francis would like to heal the rift running through Catholic life in China. He'd also like to grow the church in that country. There are an estimated 10-12 million Catholics in China. By comparison, Protestants — and this is a low estimate — number around 60 million there.

Legally, China does recognize Catholicism as one of the country’s five official religions. The authorities in Beijing even help appoint some Catholic bishops in China. This has long been a sticky issue for the Vatican.

In recent weeks, the pope has shown he is willing to be flexible on this issue. Papal authorities asked two underground Chinese bishops to resign and make way for candidates approved by the Chinese government.

“Many Catholics don’t feel comfortable going to the officially recognized Catholic Church, because many of those bishops and the priests under them, who they appointed, were not approved by Rome,” Johnson says.

“It’s a difficult situation, and it slows the growth of the religion,” Johnson adds.

From the pope’s perspective, reaching a deal with China makes perfect sense, says Bob Fu, who runs the Texas-based group China Aid, which advocates for Christian human rights in China. But he worries that Francis might be forgetting a lesson that comes straight from Jesus himself.

Fu has been following news about the possible deal between Francis and Beijing, and he is very skeptical.

“Jesus Christ is the real head and only head of the church, not the Chinese Communist Party, not the religious affairs bureau. Any policy that would contradict that, I think, should be invalid.”

One prominent Chinese Catholic leader who shares Fu’s skepticism is the former bishop of Hong Kong, Cardinal Joseph Zen. He’s a longtime critic of Chinese government policy toward Catholics. In a recent Facebook post that grabbed attention worldwide, Zen said that bishops in China are subject to “slavery and humiliation.”

As for finding mutual common ground with the Chinese Communist Party, Zen said that is simply unthinkable.

“[C]an you imagine an agreement between St. Joseph and King Herod?” he wrote.

Massimo Faggioli, a church historian at Villanova University, says he understands Zen’s point of view. But Faggioli says he has more faith in Francis and his diplomatic corps to find the best possible arrangement with Beijing.

“The Catholic Church has the awareness of a very long history. They don’t think just in terms of anti-communism, but they think in terms of church and empire,” Faggioli says.

The Vatican has been cutting deals with earthly empires going back many centuries, and Faggioli says that is why Francis seems so willing to compromise with the Chinese government.

“Pragmatism has always been a very important factor. I always say, if you want to bet your money on the long run, bet on the Catholic Church on some issues, not on ideological terms of this or that day, because they think in terms of centuries.”

Interestingly, taking the long view of history is also a very Chinese way of thinking, which makes this particular diplomatic dance all the more interesting.