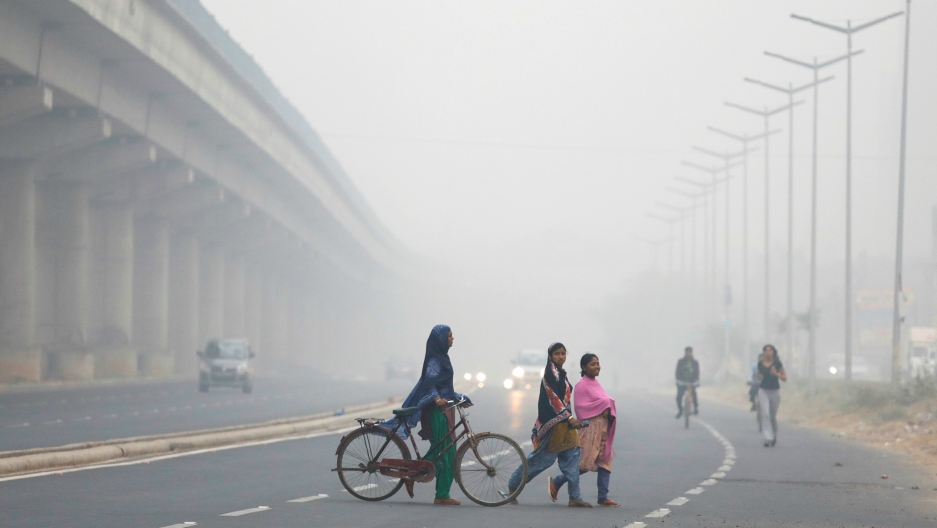 People cross the road in Delhi, India, during the height of the most recent air pollution crisis, Nov. 7, 2017.

In early November, there was no escaping the fact New Delhi was facing a public health crisis. The city’s Air Quality Index (AQI), by some readings, soared as high as the maximum, 999. Schools were closed, questions of governmental competency were raised and high-level meetings were convened.

Though conditions have improved since then, they’re still far from healthy. Over the past few months Delhi’s AQI has largely fluctuated between “poor,” “very poor,” “severe” and “severe plus.” And it’s not a new problem — on only two days since May 2015 has the city’s air been classified as “good.”

But you wouldn’t know it by observing daily life. The city’s frenetic pace persists, unperturbed. Commuters go to work on the Delhi Metro, or in one of the city’s 10-million-plus registered vehicles. Beggars and street children knock on car windows at traffic lights and the city’s several thousand homeless residents seek refuge on sidewalks and under overpasses. 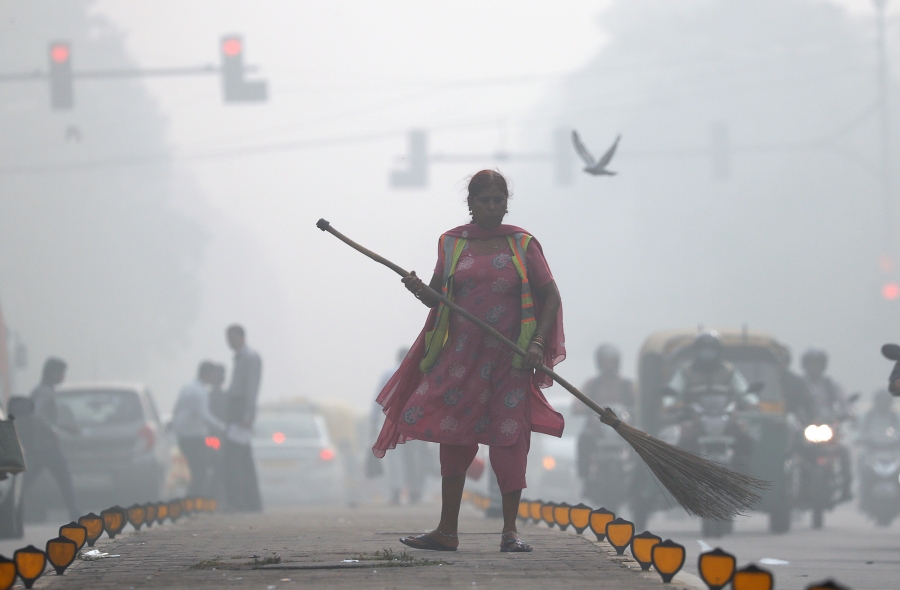 Nothing much betrays the notion that the pollution everyone’s breathing is toxic — except, of course, the air itself. But even that is debatable to some, including those supposedly working to keep the air clean.

“We are not polluted really. We are dusty.” D. Saha, the top scientist at the Air Quality Lab of India’s Central Pollution Control Board told PRI.

“If you compare the variables triggering the numbers then it’s a different story,” he says of Delhi’s high pollution levels. “Protocol followed in other countries is not acceptable [here].”

Saha also insisted that “dust is actually good” for people, that the human body deals with it sufficiently through “self-purification” mechanisms, that there is no direct correlation between pollution, hospital visits and mortality, and that those who wear smog masks actually worsen their respiratory problems.

Many of Saha’s comments are at odds with the findings of numerous studies and the opinions of many experts. His comments, however, do recall comments by India’s environment minister, who asserted there was no need to panic about November’s pollution spike because the situation was not as bad as the 1984 Bhopal gas tragedy, widely viewed to be the world’s worst industrial disaster. 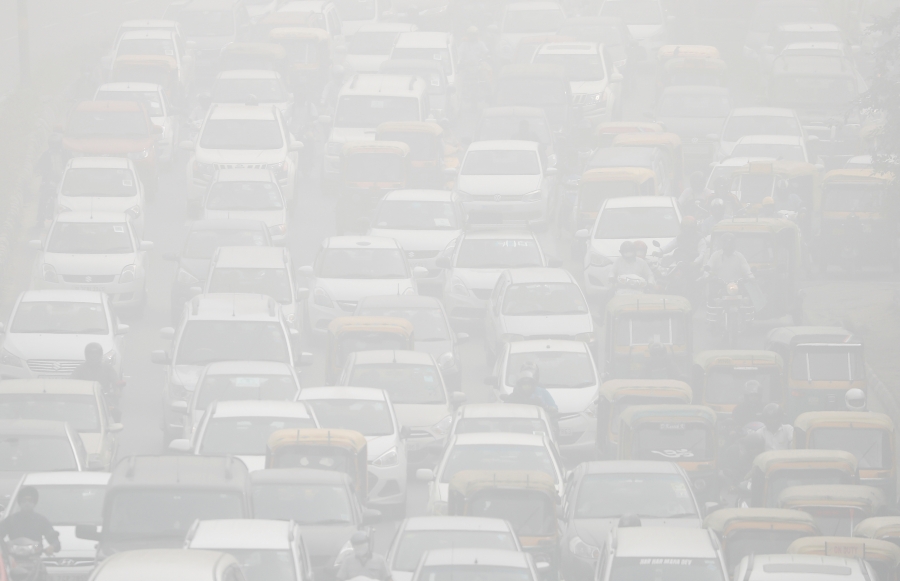 Vehicles drive through heavy smog in Delhi during the peak of the most recent pollution crisis, Nov. 8, 2017.

But government officials are not alone in suggesting Delhi’s pollution is often exaggerated — it’s a view also held by many of the public at large. Challenging that view isn’t easy.

In 2015, then New York Times South Asia Bureau Chief Gardiner Harris ignited a firestorm by writing that he and his family were leaving Delhi because of the air. Among other things, Harris’ assessment was labeled in Indian media as entitled, “smug” and a hyperbolic “drain inspectors report.”

Similar levels of indignation were reached in December when Sri Lankan cricket players wore masks during a match against India in Delhi. Play was interrupted multiple times while the Sri Lankans complained about air quality levels, which were at least 15 times higher than World Health Organization standards.

In response, a former Indian player quipped that the Sri Lankans were hiding behind masks because they were losing, rather than due to health concerns. Many fans voiced similar views, and even India’s top cricket administrators joined the chorus.

“If 20,000 people in the stands did not have problems and the Indian team did not face any issue, I wonder why the Sri Lankan team made a big fuss?” said C.K. Khanna, the acting president of the Board of Control for Cricket in India.

Harris’ article and the cricket match both could have been opportunities for national conversations about pollution. Instead, the overwhelming reaction was defensive, something those working to spread awareness say reflects the state of pollution discourse in India. Various activists and organizations have long tried to spread information to New Delhi residents about the damaging health effects of air pollution. In recent years, initiatives like the Help Delhi Breathe collective have used online videos and social media to try and raise awareness. But it's not an easy task.

“We are in denial,” says Jai Dhar Gupta, an entrepreneur who founded Nirvana Being, a company that sells high-end smog masks and air purification products.

“My child in one of the leading schools of Delhi gets reprimanded for wearing a mask. The teacher makes fun of him, forget about the kids.”

For those who might take pollution more seriously, however, even Gupta’s cheapest masks might be prohibitively costly, at 1,800-2,200 rupees (around $30-$35). And though more affordable options exist on the market, seeing people wear masks of any kind in Delhi is still quite rare. Gupta notes that there is a greater demand for masks in Beijing, even though the pollution there is no longer as bad.

“There’s an apathy towards health and the environment," he says of India. “I don’t think people have been able to connect air pollution with the health effects of it, [which are] delayed. It’s not instant like [contaminated] food or water.” 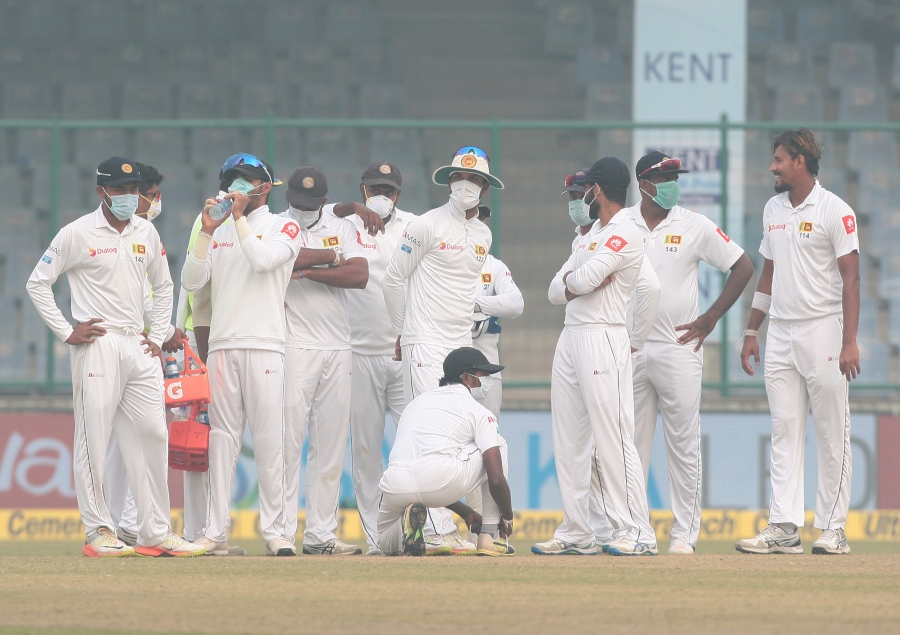 Sri Lankan cricket players wear masks during a match against India in Delhi, Dec. 5, 2017. Play was interrupted multiple times while the Sri Lankans complained about air quality levels, which were at least 15 times higher than World Health Organization standards.

Imran Khan, a local “autowallah” — a driver of a motorized three-wheel passenger vehicle — bucks that trend. One of Gupta’s masks costs at least two days worth of Khan’s earnings. But for the past two years he’s been wearing cheaper ones, which he sees as a matter of personal safety.

“The pollution is very bad. I know this because when we drive at night the light from the headlights falls on [the particles] and they shine in a different way that you can’t see in the daytime,” he says.

Delhi's pollution poses a particularly high risk to autowallahs because of how much time they spend on the road, and Khan tries to get more to wear masks.

“I keep trying to make them understand that they should and that it’s a very good thing.”

Few, though, have followed his lead. As Gupta and others note, awareness is a major problem. A lack of reliable pollution data is another commonly cited issue and is even more pronounced in other Indian cities, some of which are actually more polluted than Delhi.

But plugging the information gap may not make the general public less complacent about pollution. For many low-income Indians, there are simply too many problems to solve on a daily basis to worry about pollution and its long-term effects.

“Most of our population is just trying to make ends meet. [Pollution] is irrelevant,” says Gita Prakash, a doctor who sees many low-income patients at her home-based clinic. “[They] are just trying to see where to get food for their six kids.”

Prakash says many parents she talks to are unfazed by the pollution-related illnesses of their children. Their mindset, as she sees it, is: “They have a cough and cold? So what? At least they’re alive. At least they have food to eat.”

“Right now air pollution in India is a rich people’s problem. It is not a poor person’s problem,” she says, referring to the circles where pollution is regularly discussed.

In terms of who actually bears the brunt of pollution, though, Upadhyay stresses that it is the poor. Still, she believes the onus should not be on them to effect change.

“Let’s not expect poor people to have yet another burden of care on them,” she says. Upadhyay’s focus is to get the privileged to lead the way. “How do we mobilize people who have the influence and power to change … to do more and demand more?” 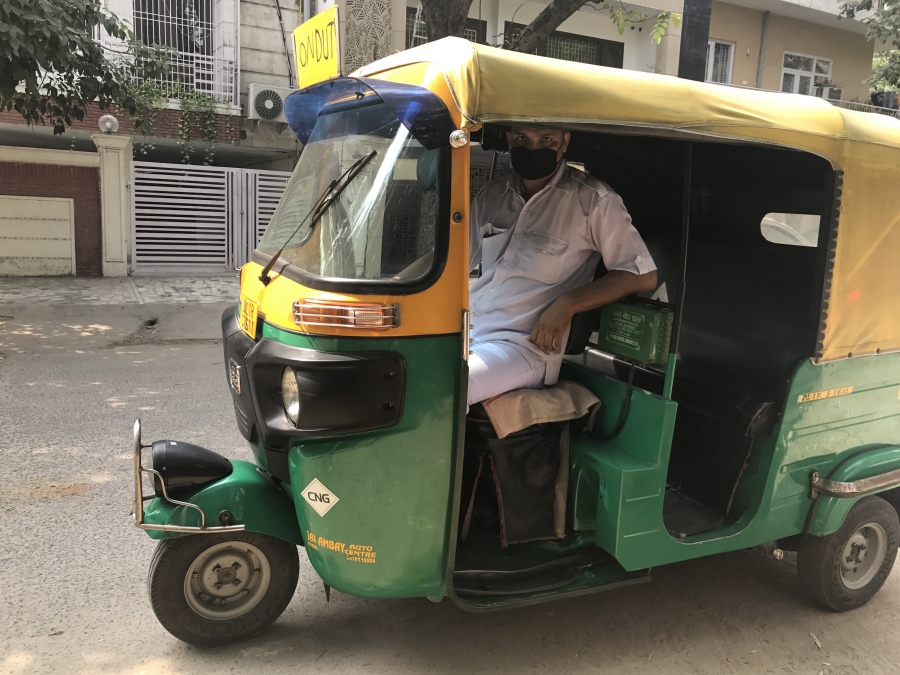 Imran Khan, a local “autowallah” — a driver of a motorized three-wheel passenger vehicle — wears a mask to protect himself from polluted air. Khan tries to get more autowallahs to wear masks, too, but few have followed his lead.

The answer to that question may be difficult to find. In India, those with means have grown accustomed to finding their own private solutions where public services fall short. Private security guards are hired in the absence of effective policing and filter systems are installed in homes for drinking water. Smog masks and air purifiers are just another workaround, critics of the government response say, necessary because of political inaction.

It should be noted that while unveiling its most recent budget, the central government announced its intention to tackle one contributor to pollution: crop burning by farmers in Delhi's neighboring states. The Delhi government has also laid out plans to impound and dismantle cars over 15 years old. But how these announcements get implemented remains to be seen. The response of government at the height of the crisis meanwhile, was marked by state governments bickering over who should address the problem, and the prime minister remaining glaringly silent.

In such a political landscape, it’s no surprise that those who can afford workarounds see them as a quicker fix than pressing the government for change. After finding their own solutions people move on with their lives, and complacency seeps in.

“Most people feel, ‘What’s the big deal [about pollution]?’” says Prakash. “We say we have to survive here. … Let’s just carry on the way we are. As long as we’re not dead, we’re alive.”