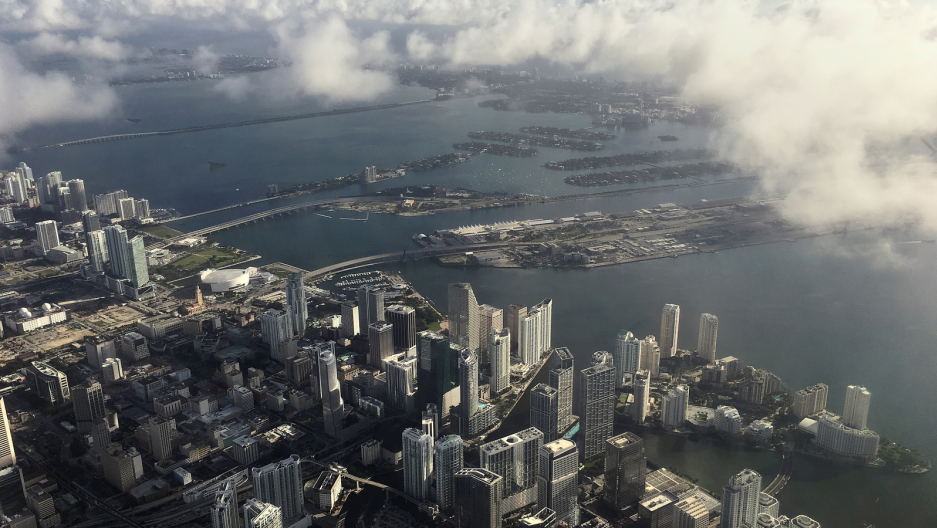 Downtown Miami is pictured in this aerial photo as clouds begin to form in advance of Hurricane Matthew in Miami, Florida, Oct. 5, 2016. Miami has the second-largest population of US cities that are vulnerable to flooding due to climate change.

The Trump administration may believe that climate change is a hoax invented by the Chinese, but Moody’s Investor Services is taking it quite seriously.

Moody’s, one of the main agencies that rate the ability of states and communities to pay back money borrowed in the form of bonds, is beginning to consider how well those jurisdictions are prepared for climate extremes and instability. It recently unveiled standards they plan to use to integrate climate risks into their ratings for bond issues.

Fixed-income expert Andrew Teras of Breckenridge Capital Advisors in Boston says this is just the beginning of a movement within credit rating agencies and financial advisors. “In many places across the country, a credit rating is an important thing,” Teras explains. "It allows cities to access the capital markets or borrow for infrastructure projects at a reasonable interest rate. The rating agencies are telling us that we are starting to move to a point where they may take action — that is, lower your credit rating — if you are not attuned to these risks. So, this could be pretty significant going forward.”

Teras’ company has already been integrating what are called ESGs — environmental, social and governance factors — into their traditional credit analysis for about six or seven years, Teras says.

“Traditional credit analysis would be when you're looking at the riskiness of a borrower,” he explains. “You might look at their financial statements. How much cash do they have in the bank? You might look at their debt. How much debt do they have relative to the tax base? What we do here is take those traditional credit metrics and layer on top of that this concept of ESG. So, we're looking at a broader spectrum of risk.”

“I think a lot of folks are having to grapple with not necessarily if climate change exists, but how fast is it going to impact?” Teras says. “And then, even if it does come fairly fast, how severe are these problems going to be and what parts of the country are going to be impacted more than others?”

Teras believes Moody’s is sending a “pretty significant message,” and his company welcomes it. “As investors, we definitely appreciate this, because the more attention paid to these types of issues, the more likely that meaningful actions are going to be taken to mitigate some of these risks,” he says.

While some communities across the country are incorporating these risks into their planning, many others have not begun to do so, Teras says. To the extent that cities are not, they will start to get a lot of questions from investors. “If investors don't get answers, in terms of at least how [cities] are thinking about them, they could demand higher interest rates to lend money,” he says.

Teras hopes to see buy-in that starts at the top — with the mayor, city administrator or city council — and extends to all levels of the government.

“If those folks are not buying in that this is a material thing that needs to be addressed, you're really not going to have success,” he says. “I think it has to happen from the top down and it needs to pervade everything that goes on. The other thing is, those folks need to promote this issue amongst their constituents and amongst the business community where they live.”