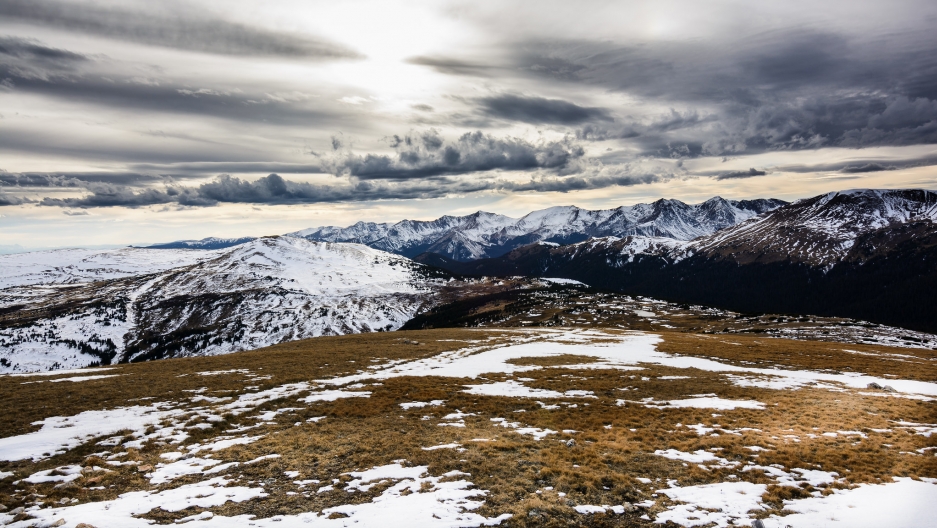 A view of tundra landscape in the Rocky Mountains — 11,000 feet from sea level.

As cold weather grips a majority of the country, it may be easy to think that all life is dead when the ground is frozen, at least until spring breathes new life into the plant systems and surrounding environments.

On the contrary, says Matthew Wallenstein, associate professor of ecosystems science and sustainability at Colorado State University. Wallenstein has spent many years researching the microbes, bacteria, fungi and other soil organisms that continue on with their normal processes underneath permafrost. By measuring the amount of carbon dioxide, Wallenstein can “measure, essentially, their breathing.”

Wallenstein says that the microbes in the soil are actually aquatic organisms that live on water films. They are able to maintain well below zero Celsius (the point of freezing) due to the high amounts of salt in the water. As the water concentrates down due to freezing, the solutes become more concentrated, lowering the freezing point of water, he says.

Roots are also able to thrive in extremely cold climates, says Colleen Iversen, a senior staff scientist and ecosystems ecologist at Oak Ridge National Laboratory. She specializes in the study of climate change’s effects on the root-soil interface.

Iversen gives the example of Barrow, Alaska, in the summertime with a maximum temperature of only 40 degrees Fahrenheit. In such a setting, one can see a “green seashore” barren of trees but teeming with smaller plants that stay close to the ground to avoid harsh winds, she says.

“So really, all the action in the tundra is below ground,” Iversen says. “There can be five times as much plant biomass beneath the ground surface compared to above.”

In Barrow, for instance, roots live in only 12 inches of soil on the top of the permafrost that thaws out every year.

“The further the roots sort of dip their toes into the soil, the closer they are to that freezing permafrost,” Iversen says. “So, there are some roots that grow along the permafrost surface, one degree [Celsius], really close to freezing, but they take up nutrients in water and help the plants survive even in those conditions."

The microbes and the roots both have undergone a series of adaptations over time. In the case of the microbes and other organic matter found in soil, the collective understanding of the scientific community has also undergone a change.

In recent decades, scientists have found evidence that microbes underneath permafrost still are “viable,” which means that they can be extracted and cultured. Further research revealed that they are living in those conditions with no impairments — just at a slower rate than may occur in warmer soils.

The adaptations that microbes have made include the ability to produce antifreeze compounds to reduce the freezing point. Furthermore, the assumed universal truths regarding the origins of the organic matter in soil have transitioned, too. The old-world understanding centered on the matter from leftover parts that was not easily decomposed by microbes and other organisms. Today’s current realization is that the brown and black matter in soils are dead microbial bodies and their waste products, which has lead to the term “necromass.”

“When your roots die — if you let the leaves fall to the ground and they decompose — all that plant material, that is, the original source, the original carbon that becomes soil organic matter,” Wallenstein says. “But it's all transformed. It's utilized by microbes and transformed into different chemical compounds and then, in order for it to be stabilized, it actually has to interact with minerals.

“So, the soil particles and minerals form chemical bonds with the organic matter that protect it for the long term from being decomposed and lost from the soil.”

Like the microbes, the roots produce a type of antifreeze, too, by concentrating sugars to lower the freezing point, Iversen says. However, plants rely not just on roots but also on the portion of the stems that are underground and in the rhizomes, also known as rootstocks.

"The plants are keeping the nutrients and the carbon they need for the next year in these below-ground storage organs so they can perk right up the minute springtime comes,” Iversen says, “and sometimes spring to these plants can mean poking a flower through the snow."

Iversen says that one of the major developments in studying roots has been shedding the idea that all of the roots do the same thing. The fine roots, which “are narrower in diameter than the charger for your iPhone,” all have different jobs that are based on their location. She compares the structure of roots to streams coming off of a mountain.

The smaller-stream roots that are farthest from the plant are vital in acquiring water and nutrients interacting with soil fungi to provide carbon for microbes. The larger roots closer to the plant are used to transport those nutrients and water to the rest of the plant, Iversen says.

"One of the things that I like about winter is seeing the trees without leaves because you can sort of see the fractal nature of the branches and that's what it looks like below ground as well,” she says.

Global warming has been playing a significant role in the collective work of Wallenstein and Iversen. There is a concern that a massive amount of carbon could be released as permafrost continues to unthaw in places for the first time.

"The amount of carbon stored in our arctic soils is as much carbon as there is in the vegetation and the atmosphere, globally, combined,” Wallenstein says. “So there's this huge amount of carbon that's been locked away and indeed if it suddenly becomes thawed and the microbes begin to process it, it can produce not only [carbon dioxide], but methane which is a more powerful greenhouse gas.”