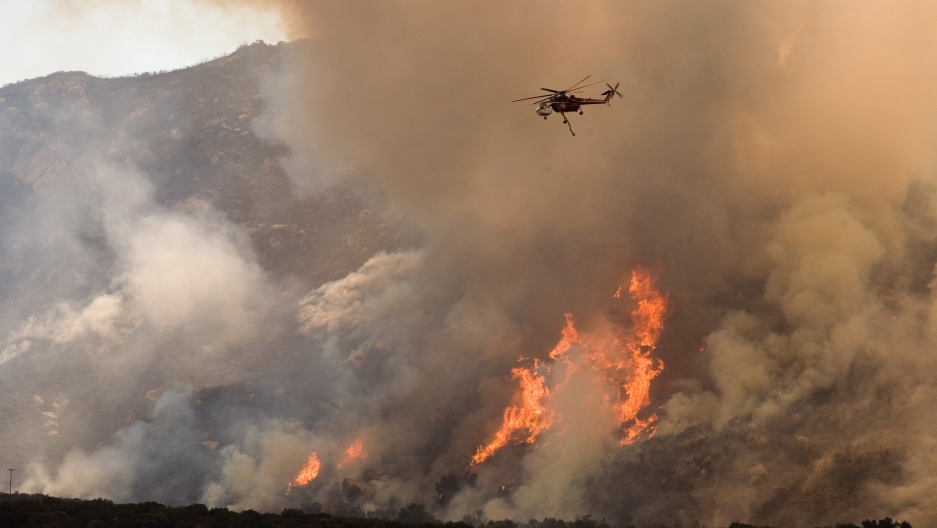 During the recent California wildfires, helicopters dropped water and fire retardant to help stop the fires from advancing.

US natural disasters in 2017 cost $306 billion, the most expensive year since NOAA started keeping track in 1980.

To put that figure in perspective, that's more than the interest on the US national debt and twice the federal budget for health, Medicare and education. The second most expensive disaster year was 2005, the year of Hurricane Katrina. That year’s total was $215 billion.

Extreme weather hit almost every state this year: wildfires out west, Hurricanes Irma, Maria and Harvey in the South, and disasters that got less press coverage but still cost more than a billion dollars — like the Minnesota hailstorm and drought in the Midwest.

Kendra Pierre-Louis, of the New York Times' climate desk, says that while climate change can’t be said to have caused all of these events, scientists agree that climate change amplified them and increased their severity.

The 2017 hurricanes account for the largest portion of disaster costs, Pierre-Louis says, and it was the most costly fire year on record, as well. But the sheer number of events is having the biggest effect.

In 1980, when NOAA first started keeping records, only three natural disasters topped $1 billion. In 2017, 16 events cost at least that much. “It's not just that we're having severe weather events. We're having more of them,” Pierre-Louis says.

Some of these events didn’t register in the national consciousness but nonetheless had a large impact collectively. Floods and severe weather in Missouri and Arkansas cost $1.7 billion. Hail storms and high winds in Texas, Oklahoma and Tennessee cost $2.6 billion. Drought in South Dakota, North Dakota and Montana cost $2.5 billion.

Not surprisingly, 2017 was the most expensive disaster year on record for insurers, according to Munich RE, which is one of the world's largest reinsurers. (Reinsurers are the insurers of insurance companies.) Much of these costs were fueled by the disasters in the United States, but significant flooding in Asia also added to the total.

Insurers are going to start passing these costs on to policyholders, Pierre-Louis predicts. People living in places that are at high risk for flooding or high risk for fires are going to end up seeing higher costs because that's the only way insurance companies can afford to cover increased damages, she says.

The one exception to this is Florida because much of Florida flood and hurricane insurance is backed by the federal government. “Taxpayers are actually on the hook for those costs,” Pierre-Louis notes, "so, there's going to be sort of a reckoning when it comes to Florida, about how they handle the insurance.”

Pierre-Louis sees a twofold lesson in last year’s events. “The first is that we should be taking steps to reduce the amount of carbon emissions that we're releasing into the atmosphere, so we can stave off the worst effects of these natural hazards,” she says. “The other thing is we need to go deep into planning for the future, which is to accept that these kinds of occurrences are more likely to happen.”