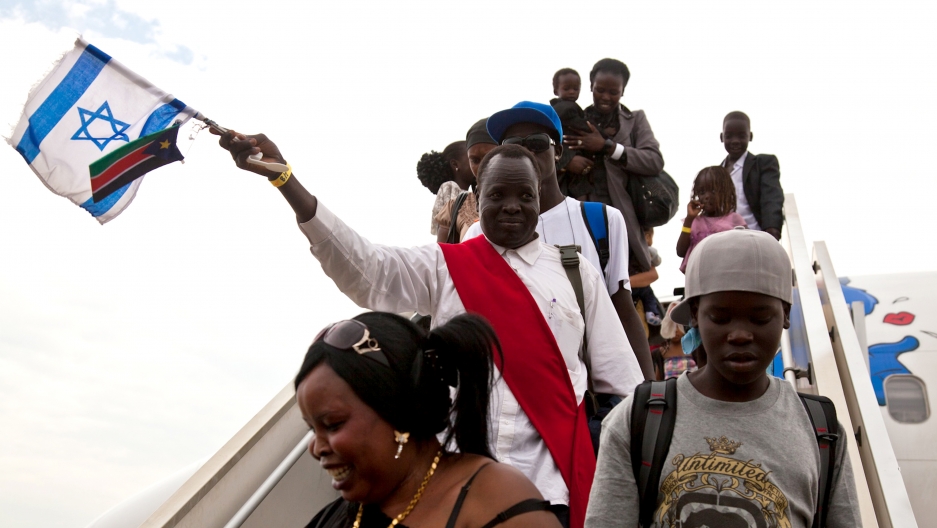 South Sudanese disembark from a plane from Israel after getting deported back to Juba, June 18, 2012.

Hundreds of Israeli rabbis, including the sister of comedian Sarah Silverman, announced a bold initiative this week: They say they will personally hide African asylum-seekers in their homes, to protect them from a new Israeli immigration policy.

Tens of thousands of African asylum-seekers, largely from Sudan and Eritrea, live in Israel. The government has announced the refugees have 90 days to accept $3,500 in cash and a one-way ticket home to an unnamed third country in Africa, or go to jail.

Human rights groups and news reports have reported that the unnamed third country is Rwanda or Uganda. And there’s evidence to suggest that once there, the migrants face exploitation, abuse and trafficking.

Rabbi Susan Silverman — an activist, writer and rabbi who immigrated to Israel from Boston in 2006 — says it’s time to fight back. That’s why she came up with the Anne Frank Home Sanctuary Movement to house refugees in private homes.

Silverman says the name comes from a story she heard about an Eritrean refugee who came to Israel.

“When he left Eritrea, he was in an Ethiopian refugee camp where, in the library, he read 'The Diary of Anne Frank.' He had never heard of her before.” Silverman says.

She says the man was so moved by the story that he translated the book into the African language Tigrinya and decided to make the treacherous journey to Israel. “And as he was heading for Israel on this harrowing, harrowing trip he said to himself, ‘the people of Anne Frank will protect me.’”

Not everyone shares Silverman’s point of view. Israeli Prime Minister Benjamin Netanyahu has called the African refugees “illegal infiltrators.” He has called the influx of migrants a threat to Israel’s social fabric and Jewish character. One government minister has referred to the refugees as “a cancer.” And polling conducted in 2012 found widespread support for that statement.

Silverman says she’s aware of the risks of opposing the government’s position on immigration. And there's the concern she and other activists could face jail time for harboring African refugees. But as she sees it, there’s no other choice.

“My dad taught Holocaust Studies,” she says. “And he always said, ‘If you want to know what you would have been doing in Germany, ask yourself what you’re doing for people at risk in the world today.’ And I always thought that’s a pretty good rule of thumb.”

To hear Susan Silverman’s entire interview with The World’s Marco Werman, click on the audio link above.

To listen to the full interview, click the play icon above.