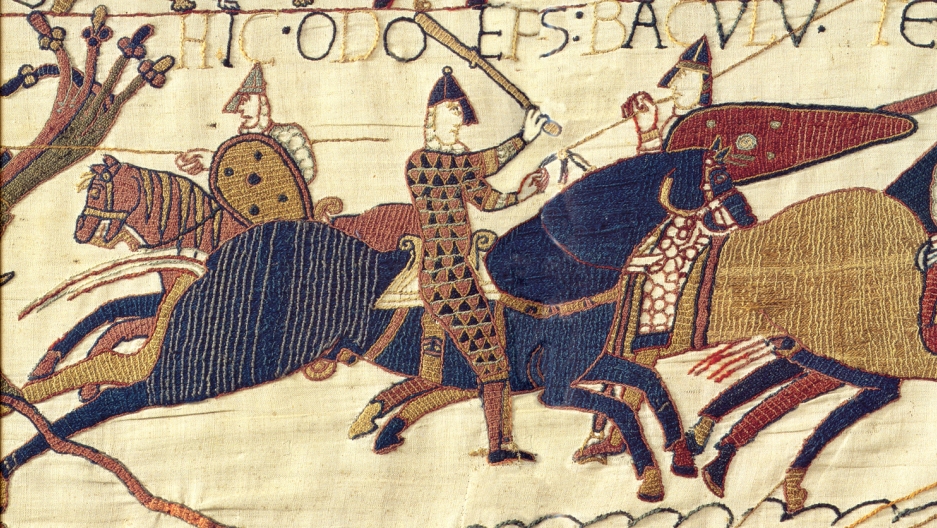 A section of the Bayeux Tapestry depicting a scene in the decisive Battle of Hastings in 1066.

French President Emmanuel Macron visits England on Thursday to discuss a host of bilateral issues, from migration to Brexit.

Yet excitement is rising in both countries because of a single piece of cloth. Yes, cloth.

Macron is expected to allow the Bayeux Tapestry to visit England for perhaps the first time in its history.

This might well be the first time it's been seen in England since it was finished around 950 years ago.

The Bayeux Tapestry is one of the most famous pieces of medieval art. It's a beautiful 230-foot-long work of hand-stitched storytelling.

Technically, it’s not a tapestry at all. Tapestries are woven. The Bayeux “Tapestry” is actually an epic work of embroidery.

It’s also an epic work of propaganda. Like a graphic novel, it depicts a seminal event in history: the Norman Conquest of England, in 1066.

For school kids in England, the year 1066 is like the year 1776 for US kids. It's kind of when history begins. It might well be the only date you ever remember from history class. There’s even a popular satirical history book called “1066 and All That.”

1066 is the year that hundreds of years of rule by Anglo-Saxon lords and kings came to an end at the hands of a gang of French thugs — mostly mercenaries —under a tough bastard called William, Duke of Normandy.

The story of the Norman Conquest is the kind of thing you might expect fiction writer George RR Martin to have scripted. It makes "Game of Thrones" look like a tea party. There’s murder, betrayal, false promises, rival families, alliances, marriages, terror and, of course, battles.

William literally was a bastard, born out of wedlock, who had clawed his way to power through his physical strength, military innovations, political smarts and sheer chutzpah. His claim to the throne of England was dubious and the majestic Bayeux Tapestry is seen by some as a masterful attempt to legitimize his claims and undermine his rivals.

Whatever the legitimacy, there’s no doubting the Norman Conquest transformed England.

William’s blood still runs in the veins of the British Royal Family. His armed supporters became the new aristocratic elite of England, displacing and sometimes murdering most of their Anglo-Saxon predecessors. They built castles to ensure their domination of the country. It was a military innovation that the English could not overcome. Many of the families established at this time also still exist: Beaumont, Montfort, Montgomery, Osbern, Giffard, Warren.

Sure, there was as much collaboration as resistance. There always is in any conquest.

But English nationalists have never been comfortable acknowledging the fact that Frenchmen decisively conquered their country and ruled it for hundreds of years.

The fact was disguised by some historians who stressed the Normans were descended from “Northmen,” as if to suggest to their audience that it was okay to be conquered by fierce Vikings rather than the French.

But the fact remains that William and most of his supporters spoke French (with a few Flemings and Bretons), and this remained the language of the elite for hundreds of years. The English language transformed itself during these centuries of conquest from the Germanic language it was originally, with its strict grammatical rules, to the more loosey-goosey language it became.

William’s military victory is the main reason the tapestry is in Bayeux, in Normandy, France — the true heart of his domains.

The legacy of 1066 continues, not only in the Royal Family and in popular prejudices and rivalry between the English and the French. But there’s also a popular, and probably mythical, divide within England — a class divide.

The popular legend, as seen in the Robin Hood genre of books and movies, is a world of oppressed Saxon peasants and their rightful lords fighting — sometimes guerrilla-style — against exploitation by a Frenchified elite. The caricature exists of the upper-class aristo with a French-sounding name, a receding chin and an aquiline nose.

The class divide persists. In the popular imagination, the English upper class still has a preference for learning French, drinking wine and vacationing in France. Whereas working-class folk are believed to be more likely to drink beer and vacation in cheaper Spain.

Reactions to Macron’s proposal has been mixed in England. Many are delighted at the prospect of seeing such a priceless part of history. But some commentators are more critical. Journalist Robert Peston tweeted that "lending the UK a magnificent depiction of the last time this country was invaded and subjugated is a wonderful Gallic joke by Emmanuel Macron."