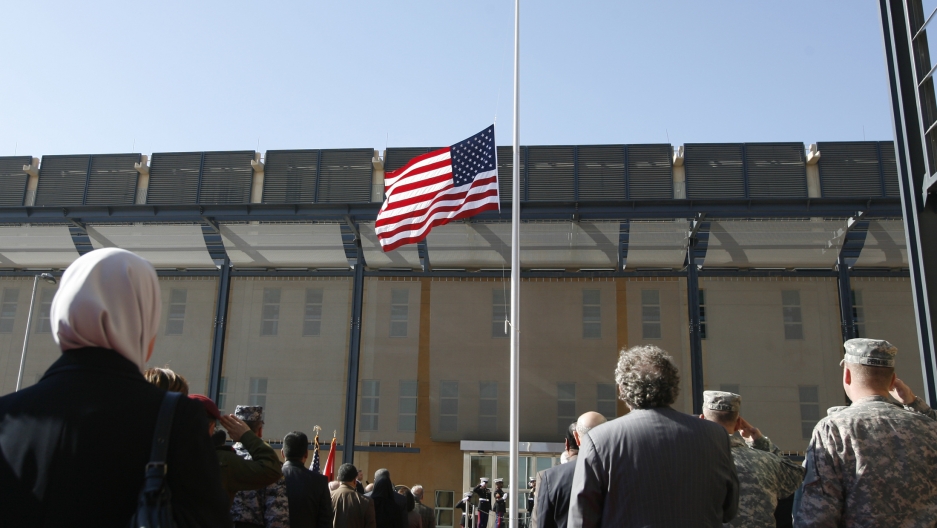 The formal opening of the new US embassy in Baghdad’s fortified Green Zone, Jan. 5, 2009.

The new US embassy in London has been criticized by none other than President Donald Trump for being expensive, with a price tag of about $1 billion. But it’s still cheaper than the US embassy complexes in Kabul, Afghanistan and Baghdad, Iraq.

Given their locations, both complexes require heavy security. But the US embassy in Baghdad is an entirely self-contained colony.

It even has its own water and waste treatment facilities, as well as a power station.

At its height in 2011/12, the embassy employed an estimated 16,000 people, mostly contractors. There are two "office" buildings; six residential buildings, each with 100 apartments; a shopping mall; an Olympic-sized swimming pool; a gym; and tennis courts. Check out this slideshow.

It's the heart of the "Green Zone," which author Rajiv Chandrasekaran called a "surreal bubble of Americana."

The embassy was designed in the aftermath of the US-led invasion in 2003 as a symbol of the permanence of US influence in Iraq and throughout the Middle East.

“It’s a lot quieter now,” says Iraqi journalist, Sahar Issa. “And, of course, the embassy has changed in character.”

Everything began to draw down after the US military withdrawal in 2011, says Issa. The State Department declined to comment on current employment numbers for security reasons, but Issa estimates it as fewer than 6,000 today.

Issa says Baghdadis resent the embassy’s occupation of such prime real estate along the Tigris River. “People wish they could actually walk along the embankment of the Tigris and enjoy the nice evenings in the breeze there.

“It hurts,” she adds. “It hurts me, as an Iraqi, and it hurts a lot of people. Everyone speaks about it, and everyone is waiting to see when the situation is going to change.”