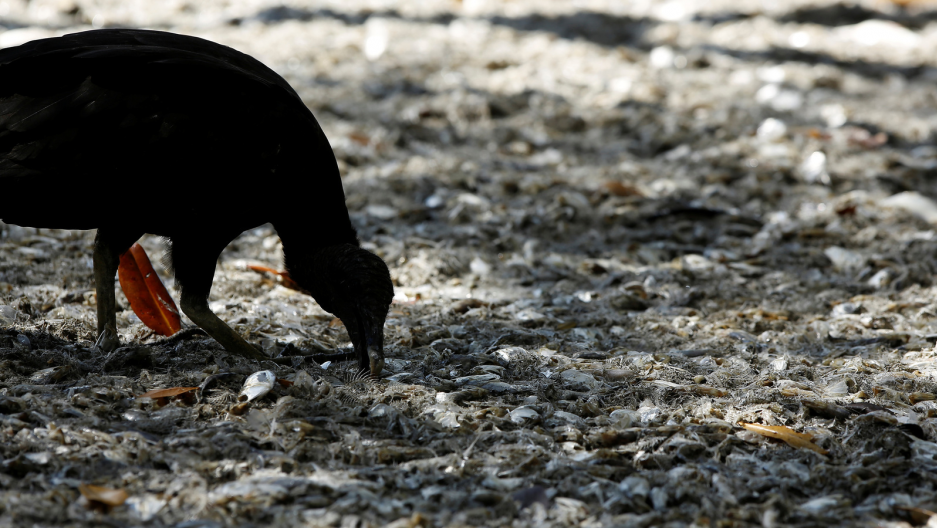 A bird eats dead fish in the area where thousands of dead fish washed up on Abangaritos beach in Puntarenas, Costa Rica, Feb. 16, 2017.
Credit:

Oxygen — we all need it to breathe.  And the ocean needs it to produce marine life and help maintain biodiversity and a healthy ecosystem. But as the planet warms, the oceans hold less oxygen, which is creating dead zones and areas where marine life cannot survive.

Now, a new analysis by the Smithsonian Environmental Research Center, published in the journal Science, shows that the oceans are suffocating as the number of dead zones is dramatically increasing.

“Oxygen concentrations are declining both in the open oceans and along the coasts,” says Denise Breitburg, a senior scientist at the Smithsonian Environmental Research Center and one of the researchers of the analysis.

On the whole, ocean dead zones have quadrupled in size since 1950. What’s driving this? Breitburg says the answer is twofold.

“In coastal waters we have too much nutrients coming off the land from sewage and from agriculture,” she says. “Globally, especially in the open oceans, climate change and global warming is what’s really causing the loss of oxygen.”

If this were happening on land, Breitburg says that society would be “appalled” by the loss of life.

“Where oxygen is really low, marine life just cannot thrive — oxygen is fundamental to life in the oceans,” she says. “There are microbes and some organisms that are adapted to extremely low oxygen concentration, but many of the animals we think of — fish, sea urchins, crabs — really depend on having sufficient oxygen in their habitat in order to use those areas.”

A loss of oxygen has meant that marine life is avoiding some coastal areas like the Chesapeake Bay, the Gulf of Mexico and the Baltic Sea.

“When oxygen concentrations drop fairly quickly, the sea bottom can be literally covered with dead animals,” she says.

While the oceans do have low oxygen areas, called “oxygen minimum zones,” Breitburg is concerned that these areas could expand.

To fight against dead zones along the coast, Breitburg says that communities need to improve sewage treatment plants so that nitrogen is not released into the water, and improve agriculture sites so there’s less runoff of fertilizers into waterways.

“A major beneficial effect has actually been from the Clean Air Act — we have less nitrogen coming in from atmospheric deposition that was caused by fossil fuel burning,” she says. “Clearly, dealing with global warming is going to take a global effort. We know in general what needs to be done — we need to dramatically decrease the emissions of greenhouse gases. This is going to be incredibly important not just for restoring oxygen in the oceans, but for all of the other problems being caused, and will be worsening, as a result of global warming.”