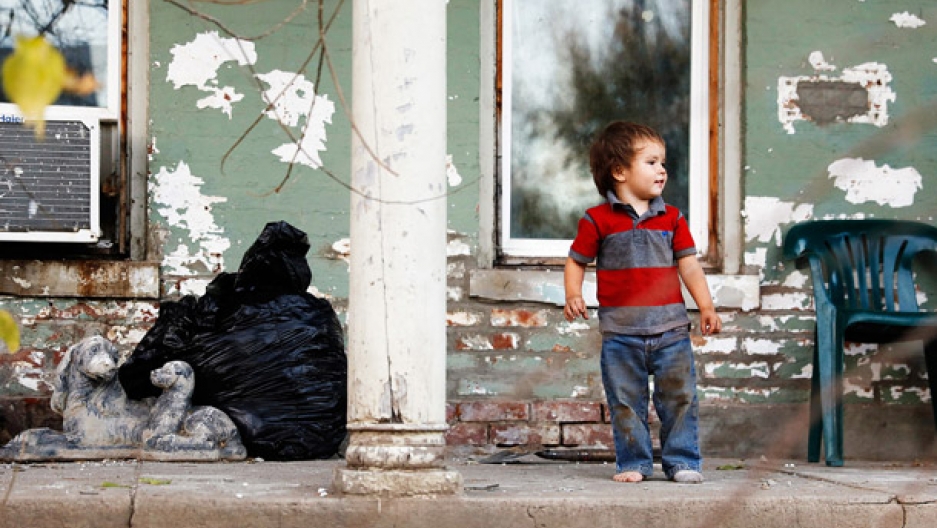 St. Joseph, Missouri, has neighborhoods filled with aged homes and high rates of lead poisoning. Here, Kadin Mignery, 2, plays on his front porch. Kadin was diagnosed with lead poisoning, prompting his mother to change his diet and repaint the home’s interior.

In more than 3,800 neighborhoods throughout the US, children have blood lead levels more than double those found in Flint, Michigan, the city that in 2015 became the focus of national concern about childhood lead poisoning, according to a special report from Reuters.

Many scientific studies have documented lead’s negative effect on brain and social development and the toxic metal’s connection to failure in school, delinquency and crime. Yet little is being done to address this problem that afflicts neighborhoods throughout the United States, according to the investigation.

The problem is not just with lead pipes and contaminated water, as in Flint, says Michael Pell, who was part of the Reuters investigative team. Children can pick up lead from buildings and soil.

“Even in Flint, it's commonly perceived that [the source] is water, but there are kids that had high lead exposure before the problems with the water,” Pell explains. “Experts believe that the major source of lead exposure comes from old, decaying paint; but more and more research is being done to determine exactly where lead exposure is coming from, and a lot of people are starting to think that maybe it is a cumulative effect.”

Lead paint is still probably the driving factor, but old, lead plumbing fixtures also contribute, as does soil in people's yards. “When that lead paint comes off their houses, when the exhaust that contained lead from past car fumes gets into the soil, it doesn't go away,” Pell explains. “So, when kids go outside, they play, they stick their hands in their mouths, they track the dirt back inside their houses, they play on the [floor] — that gets into a child's blood system, as well."

The Reuters team obtained their data directly from state health departments and from the CDC, Pell says. Many states provided the data quickly; other states — Ohio, for example — dragged their feet and “decided they didn't want this information out there.” In these cases, the reporters had to make Freedom of Information Act requests for the data because, in many cases, states report blood lead levels results to the CDC.

“Previously, the only information available to the public were countywide maps that states made to show the percentage of tested kids in the county who had high lead levels,” Pell says. “We found that those countywide maps not only didn't really show the problem areas, but they actually could provide a false sense of security — because if you look at the entire county, [you might see] a small percentage of kids with high lead levels, but if you break that down by neighborhood level, what you could see is that there are some neighborhoods where a lot of kids are still testing very high for lead.”

So the reporters obtained data broken down by census tract or zip code to identify neighborhoods where kids still had high lead levels. This was inspired by a story they previously wrote about East Chicago, Indiana. In East Chicago, a housing development was built on top of an old industrial smelting site and a CDC study said there was virtually no chance of children being exposed to lead from that old site.

"A few years later, of course, the mayor was evacuating this housing community,” Pell says. “We went back and took a look at the state's data and showed that the CDC's assessment was incorrect. The CDC claimed correctly that while the city as a whole had a low percentage of children testing high for lead, in the census tract where that housing development was located there was a very high percentage of kids with elevated lead levels.”

In general, Pell notes, the communities most affected are low-income neighborhoods, often predominately of people of color — places like Cleveland, Baltimore and Philadelphia. These neighborhoods typically consist of housing that's poorly taken cared of. Gentrifying neighborhoods are also being affected.

“People move into these old houses, these historic homes, homes that have been painted for decades, if not a hundred years, with lead paint, and they come in and they start renovating and that can kick up a lot of this old lead paint,” Pell explains. “We also see this in communities that have a long industrial history. One census tract that we identified in Indiana doesn't have a tremendous amount of older housing, but what it did have was a lead smelter site in it, and there was a housing development built on top of that.”

After having spent almost two years talking to epidemiologists, public health experts and nonprofits that provide healthy housing for people, Pell can say one thing conclusively: “There is no safe amount of lead in a child's blood system and there are costs down the road for society as a whole.”

“Lead causes permanent learning disabilities in children; it can cause behavioral problems. Those [issues] are not going to go away until we focus more attention on it,” he says.

This may happen sooner rather than later: Just days ago, a federal appeals court ordered the Environmental Protection Agency to revise its nearly 17-year-old standard for dangerous levels of lead in paint and dust within one year.