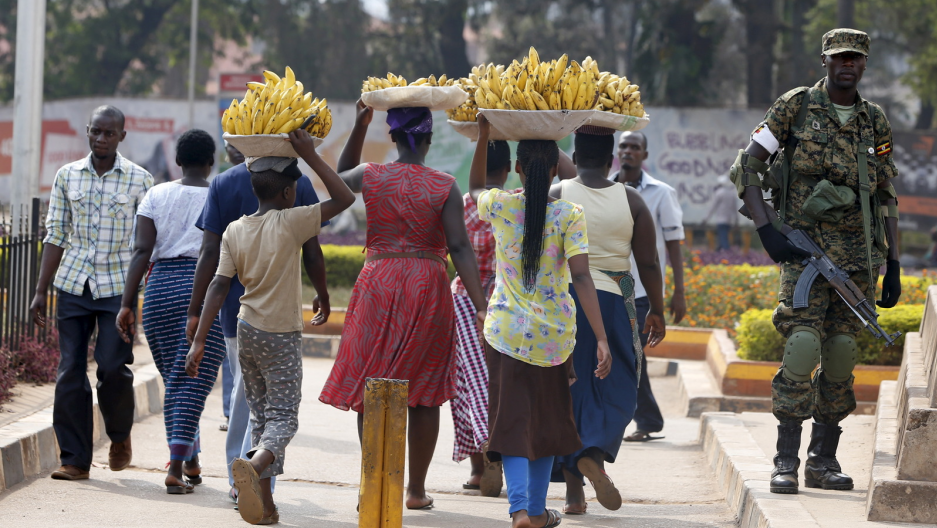 Women carry baskets of banana as they walk past a military personnel patrolling in Uganda's capital Kampala, Feb. 19, 2016.

Uganda is, quite literally, a banana republic.

The east African country is the world’s second-largest banana producer, and every day Ugandans consume an average of 1.5 pounds of bananas each. Long, green plantains are cooked and mashed into a soft, starchy national dish. Shorter, sweet bananas are roasted over hot coals to make a roadside snack. For breakfast, bananas are stewed in a savory sauce usually accompanied with meat or beans.

So when banana crops are threatened by disease or pests, the consequences can be dire. An invasion of banana bacterial wilt last decade was predicted to destroy 90 percent of the country’s crops at a cost of $4 billion. The disease was stopped, but only after expensive and protracted interventions by the government.

Next time, the country will likely turn to a different solution: genetic modifications.

In October, the situation changed. Uganda’s parliament passed a bill opening up access to agricultural biotechnology, pointing to a future in which improved, hybrid and genetically modified crops become commonplace. For critics, that image is a scary one that would make poor farmers vulnerable to unexamined risks. But as the effects of climate change become more pronounced, exacerbating variances in weather and furthering the spread of pests and disease, advocates say they can't afford to leave possible remedies on the shelf.

“The issue is Africa has problems. The African farmer has problems. He is desperate for solutions,” said Jerome Kubiriba, the program leader of Uganda's National Banana Research Program. “Do we keep quiet when we see a potential of a technology?”

“With time, a lot of improved varieties are going to be with farmers,” he added. “We need to be responsible. We need to develop safe things, which is okay. But what I don’t accept is not to develop them at all.”

Uganda has a reputation as East Africa’s breadbasket.

Driving across the countryside, one encounters vast plantations of sugarcane, coffee and bananas. Even in Kampala, the traffic-clogged capital, small shambas with cassava, corn and mangoes are squeezed into the narrow patches of empty land between homes.

Nearly 75 percent of the country is involved in agriculture.

But despite the land’s plenty, people are going hungry.

In January, the government warned that 11 million people were on the brink of starvation, adding an exclamation point to a stubborn trend of malnourishment. Between 2006 and 2015, the number of undernourished people more than doubled from 6.8 million to 15.2 million.

The causes of Uganda’s food shortages are numerous.

More than 70 percent of arable land in the country’s bountiful southwest and northern regions was affected by drought this year, and farmers say that seasonal rains are increasingly unpredictable.

“Changing weather patterns, everybody is experiencing it in the last, probably, one decade or so,” said Dick Nuwamanya Kamuganga, the president of the Uganda National Farmers Federation.

Pests are a constant battle. The fall armyworm, an American bug first detected in Africa in early 2016, has destroyed more than 740,000 acres of corn across the continent and threatened 450,000 tons in Uganda.

More structurally, infrastructure is poor, which makes it hard to store or transport food. There is little access to chemically enhanced fertilizer.

“If we had irrigation infrastructure, we would certainly be able to overcome the changing [weather] patterns,” said Kamuganga.

‘We have to think twice’

Biotechnology is just one component of the solution, argues Kubiriba, from the Banana Research Program.

“You will not use one thing. You use a number of things to manage a system,” he said. “[The idea of a] silver bullet does not work.”

Still, critics worry that enhanced crops are not being treated with enough skepticism.

“We have to think twice before the GMOs,” agreed Patrick Iga, 48, who was voted Uganda’s best farmer by a local newspaper in 2014. Iga, a stocky man with a round face, worries that lawmakers don’t understand precisely what Pandora’s Box they may have opened by paving the way for widespread use of genetically modified crops.

Multinational corporations “want to control food,” he warned, in a grim echo of Uganda’s colonial past. And given the heated arguments around GMOs in the US and Europe, “How can we accept the GMOs before those guys accept it?”

The vast majority of farmers aren’t like Iga, who was educated in England and owns several hundred acres of farmland across the country. Instead, most operate on a subsistence basis, growing just enough food to feed themselves and sell a little excess at a nearby market.

For those families, the introduction of genetically modified seeds may entrap them in a life of debt to multi-national agribusinesses, warned Barbara Ntambirweki, a research fellow with Advocates Coalition for Development and Environment.

“They’re controlled by corporate interests. Their costs are too high for the poor,” she said.

And as African countries experiment with genetically modified crops, some find cautionary tales. Burkina Faso, 3,400 miles away from Uganda, is Africa’s top cotton producer and one of the handful of countries to allow the cultivation of genetically modified non-food crops. It introduced a pest-resistant strain of cotton in 2008, but quality decreased. Monsanto, the supplier of the seed, has acknowledged changes in the cotton but argued that its technology is just one of many factors of fiber quality. Burkina Faso did not renew its contract with Monsanto last year, and the dispute was resolved in March.

“It’s one of those examples that people give and say, ‘It failed in Burkina Faso. What about Uganda?’” said Ntambirweki.