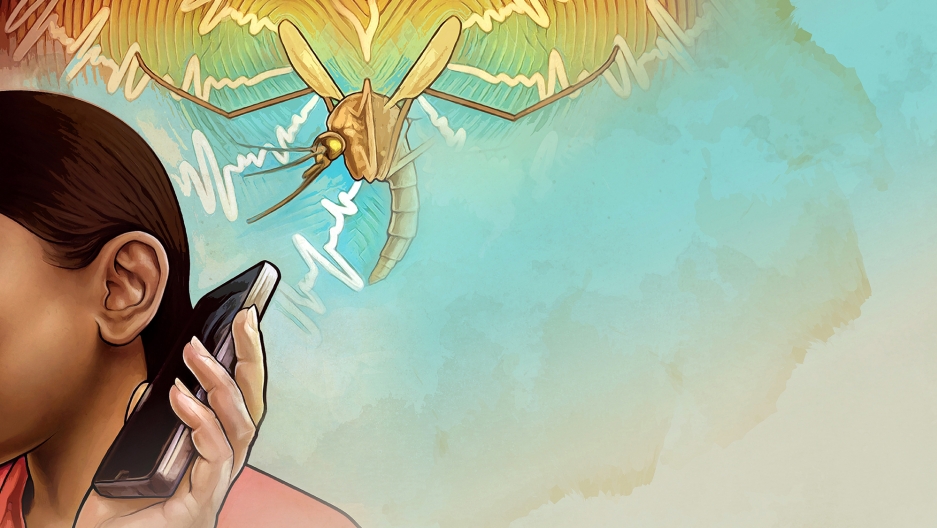 The Abuzz project hopes to help curb mosquito-borne illnesses by using cell phones to track mosquito outbreaks around the world.

Over the last few years, Haripriya Mukundarajan has gotten intimately acquainted with the world’s most efficient serial killers.

“This is Anopheles gambiae, the most dangerous animal in the world,” she says, pulling up a recording of one flying around.

The mosquito kills almost half a million people every year in sub-Saharan Africa, many of them children under the age of 5. Its relative in India, Anopheles stephensi, is probably the one that gave Mukundarajan malaria back when she was in college.

“I had the worst headache ever. I didn’t know my head could hurt that badly,” says Mukundarajan. “Each cough was an adventure in pain ... [It was] the only time when I really feared that I might not make it to see the next day,” she says.

Mukundarajan is now a bioengineer at Stanford University, and she’s hoping to help keep other people from getting diseases from mosquitoes.

“What we really need is lots and lots of data on how to find them,” she says. “When are they encountering humans? Where and how and when are they biting people to make them sick? And this is data that's extremely difficult to collect.”

At the moment, most mosquito maps are either indirect — like predictions of where mosquitoes might breed based on satellite images — or they’re incomplete. In fact, there’s a saying that current mosquito maps just show where the entomologists are, not the bugs.

Stanford bioengineer Haripriya Mukundarajan, center, began the Abuzz project after contracting malaria while she was in college.

But Mukundarajan and her colleagues realized they might be able to solve that problem by using a tool that everyone has in their pockets: cellphones. People everywhere have cellphones.

“What’s more, those places in the world where the mobile network is growing fastest — with the most number of subscribers added every year — are the same exact places in the world that have the maximum amount of mosquito-borne disease,” says Mukundarajan.

The trick is to use the phones to record the insects’ sounds.

“When they beat their wings to fly, they beat it at a certain number of times every second, and that's what we hear as that annoying buzzing whine of the mosquito,” says Mukundarajan.

Those annoying buzzes actually sound different because different species flap their wings at different rates. It’s how they find their mates. You can even tell male and female mosquitoes of the same species apart because their wingbeat frequencies will always be one musical fifth apart — except for them they mate. Then they harmonize, matching their frequencies.

In a project called Abuzz, Mukundarajan and her colleagues are asking that people around the world hold off on squashing mosquitoes just long enough to whip out their cellphones and record the bug for a second or two, then send in the file so they can compare it against their database of other mosquito recordings. The sound alone might be enough to identify the mosquito. If not, the time and location data recorded along with the sound might help identify the species. For example, some mosquitoes have different biting schedules.

“The malaria mosquito bites mostly at night, while the Zika and dengue mosquito is like a toddler on sugar. It just goes throughout the day,” she says.

With a sense of which mosquitoes are where, health officials might be able to spray pesticides in the specific area where they’re breeding or distribute bed nets in the right neighborhoods so that fewer people get sick.

They might even be able to help track how mosquito ranges are changing in response to climate change.

“That's an important point for the future because there are plenty of regions of the world that are getting warmer,” says Mukundarajan, “and this means that mosquito habitats are expanding.”

Other mosquito researchers are impressed with the project.

“It’s wonderful stuff,” says Aubrey Moore. Moore is an entomologist at the University of Guam who is not involved with Abuzz. He worked on identifying mosquitoes using sound in the 1980s, though he says the idea goes decades back. In fact, in the 1940s a Finnish entomologist with perfect pitch managed to catalog hundreds of insect species using just his ears. The man could tell exactly which “note” an insect was playing, so to speak, and identify it right away.

“So, people have been suggesting you can use wingbeat frequency for identifying insects for a long time,” says Moore, “and it's just recently that the cheap, ubiquitous equipment is available to us for doing that.”

“If you look at the wingbeat frequency plus those harmonics, you get far more information which would allow you to separate out species,” says Moore.

The Stanford project can’t do that. But there are other groups working on mosquito-identification methods that do incorporate more measures, including harmonics.

One of them even harkens back to a James Bond-style spy technique for eavesdropping.

“When you speak in your office, the window vibrates ever so slightly,” says Eamonn Keogh, a professor of computer science at the University of California, Riverside. Apparently, Cold War spies could actually shine a laser on an embassy window, for example, and reconstruct a conversation inside based on subtle vibrations in the light.

Keogh remembers learning about the trick and wondering: What if a bug flew in front of the spy’s laser as she was trying to intercept a secret conversation? The spy, to her chagrin, would hear the bug, not the top-secret conversation.

He decided to run with his observation.

“You can kind of spy on insects by doing this trick with the light,” says Keogh.

He and his colleagues have built light sensors that can detect not only a bug’s wingbeat frequency but other information, too, like its harmonics, the height an insect is flying at and its direction and speed.

“We can even tell you if she's recently had a blood meal,” he says, because mosquitoes fly a little bit differently when they’re full.

Keogh’s idea is to set up a bunch of these sensors in places where mosquitoes are a problem and have them report back — in real time — which bugs are flying past.

But there will almost certainly be fewer of these sensors around than there are cellphones, which brings us back to the Abuzz project and Haripriya Mukundarajan. She says it’s already underway, with recordings sent in from countries as far afield as Tajikistan, Malaysia, Brazil and Germany.

“If we get this from, for example, every single house in a city, we'd be able to build a really good map of mosquito density in that city,” says Mukundarajan.

Her group recently published their methods in the journal eLife after field trials in the US and Madagascar, and are now building their database. At this point, they can only identify 20 out of about 60 species that can make people sick. But Mukundarajan says the database will be open to anyone who wants to sift through it or come up with a better identification algorithm.

And just for fun, the lab hired a composer to make a song from mosquito sounds. “We deal with mosquito sound,” Mukundarajan says. “It can’t be all bad. I mean, they sound so sci-fi and so jazzy!