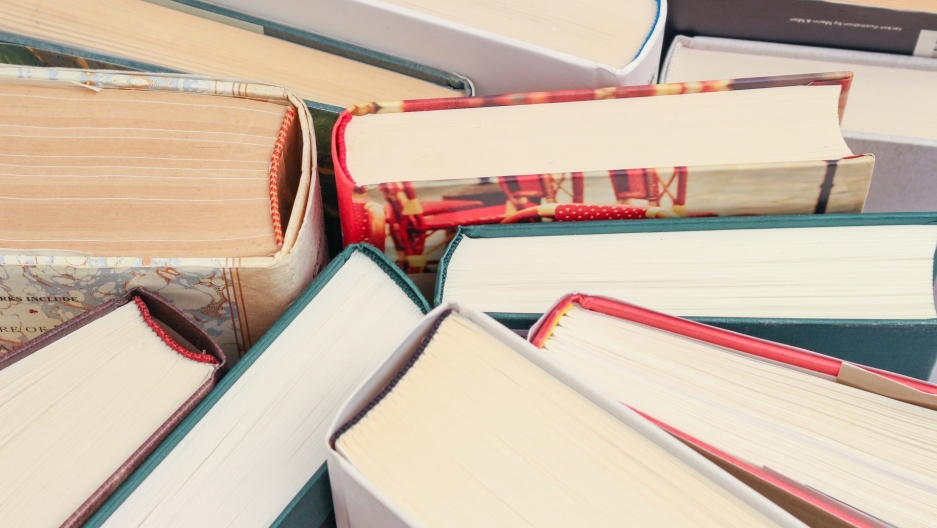 Many great science-related books were published in 2017. Some of our favorites are detailed below.

It’s that magical time of year, when Science Friday rounds up the best science books to hit shelves in 2017.

Maria Popova, the founder and editor of Brain Pickings, and Deborah Blum, a Pulitzer Prize winner and the director of the Knight Science Journalism program at MIT, joined host Ira Flatow to share a few of their favorites. For their full list of picks, check out Science Friday's website.

For Blum, "Code Girls" was one of those books. “I sort of hounded my husband around the house, saying, ‘Let me read you this. Let me read you this. This is really amazing,’” she says. “And the book is a really riveting story of the women who — during World War II — were engaged in the secret … deciphering of codes, of both the Japanese and the German codes."

Many of the women hadn’t had the chance to train as scientists, she says. “One of the things I love about the book is these were school teachers and actuaries and factory workers who just had an unusual gift for math and pattern and language. They came from small towns all around the country, and they went wholeheartedly into trying — as they saw it — to save the soldiers abroad, understand what was going on.”

In "Code Girls," Mundy does a beautiful job of explaining the technology of code-breaking, Blum says. “I think the other thing for me is it’s a really great behind-the-scenes look at war and the technology and science of war, in a way that is thought-provoking and eye-opening. So I think it worked for me on all of those levels.”

"The River of Consciousness," by Oliver Sacks

Popova says great science books “humble us into remembering that we’re just a tiny part of a vast and complex universe.” For her, the late Oliver Sacks’ books do just that. "The River of Consciousness" is a posthumous collection of essays, including some that have never been published until now. “He worked on them until the very end — essays on memory and creativity and Darwin’s love of flowers and Freud’s little-known contributions to neurology,” she says.

“But it’s also a very personal book for him,” she adds. “Because the thing for which he’s been so beloved — this kind of friendly curiosity that he takes to his patients — he now turns on himself as he confronts perhaps the hardest parts of existence: aging, and ultimately, dying.”

"Quackery: A Brief History of the Worst Ways to Cure Everything," by Lydia Kang and Nate Pedersen

“It explores the past history of weird medical cures, and scientific oddities, and the way we try to treat each other,” Blum says. “And the examples from it, and the fun that they have with it, you can pick it up at any given moment and go, ‘Wow, were we wrong about that.’”

For example, Blum says, people in the 18th century had figured out that tobacco was a stimulant. “And so they developed an idea that if people drowned, then they would just blow tobacco smoke up their butts, right? That would revive them from drowning death,” she says. “Actually, they used a bellows.”

“And I started thinking about it later, and I thought, yeah — if you were not quite dead and someone was bellowing hot tobacco smoke up you, it might really wake you up. So you could argue that they at least that a point there.”

"Black Hole Blues and Other Songs from Outer Space," by Janna Levin

"Black Hole Blues" is so good that Popova used a loophole to include it on this year’s list. “It’s a book that was published last year, though the paperback came out a couple of months ago,” she says. “But what merits its inclusion this year — quite apart from the fact that it’s one of the most beautiful books I’ve ever read in my entire life — is that it’s the definitive chronicle of the discovery that won the 2017 Nobel Prize in physics, which is certainly the most significant discovery in astrophysics in our lifetime, and probably since Galileo: the detection of gravitational waves, the sound of spacetime.”

Listen to Janna Levin on Science Friday, and read an excerpt from Black Hole Blues and Other Songs from Outer Space.

American Wolf: A True Story of Survival and Obsession in the West, by Nate Blakeslee

“[It’s] the story of the reintroduction of wolves into Yellowstone, and it’s just so beautifully written,” Blum says. “I could not put the book down, even though — you know, it explores issues of politics and science and natural history and what it means to bring back an often-hated species into an ecosystem, and conflicts between hunters and scientists and biologists and wilderness.

“You know, it wraps into this incredible story of wolves and who they are — the story of how we take care of the world around us.”

"The Death and Life of the Great Lakes," by Dan Egan

“'The Great Lakes' are this amazing stretch of inland seas that many of us never see because we’re clustered on the coasts,” Blum says. “And yet, they’re such a remarkable part of what this country is, and Dan Egan does this incredible job of telling their story at a very human, individual level. I mean, he has an incredible gift for detail that will make you say, ‘Can we please save these?’”

Blum, who used to live in Wisconsin — bordered by both Lake Michigan and Lake Superior — says that standing on their shores is “like standing on the edge of the Atlantic.”

“The power, and beauty and grace of those bodies of water and their ecological importance … this book does justice to them both in that grand scheme, but also in the tiny details,” she says. “There’s a wonderful bit about zebra mussels. And when this woman scoops up what she thinks are a handful of pebbles, and they start to move across her hand, it’s just like, chilling.”

Listen to Dan Egan on Science Friday, and read an excerpt from "The Death and Life of the Great Lakes."

This article is based on an interview that aired on PRI’s Science Friday with Ira Flatow. Check out the full list of 2017’s best science books at Science Friday.