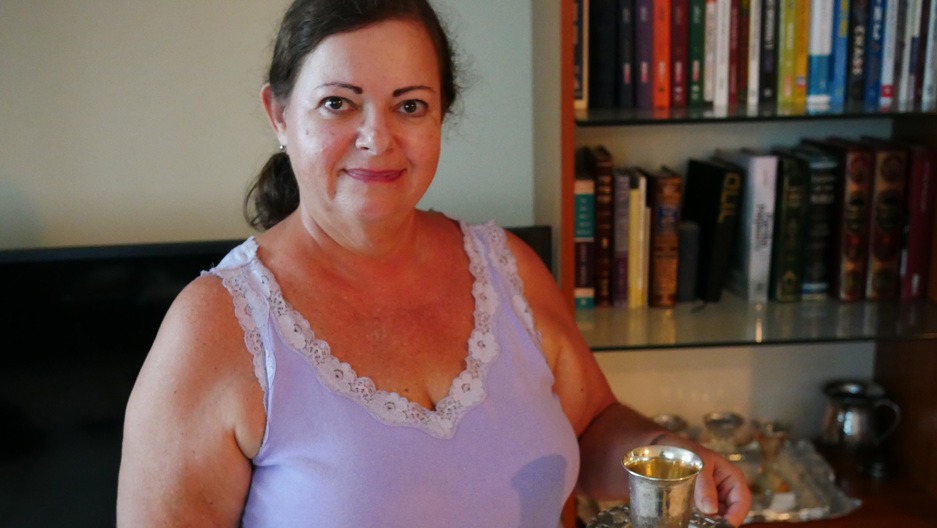 Mely Revai in San Juan, Puerto Rico, holding a kiddush cup she brought from her home in Caracas.

At the Chabad of Puerto Rico, a thin crowd sang along with Rabbi Mendel Zarchi as he lit the candles on the first night of Hanukkah. Usually, the rabbi does the rites for hundreds of Jewish tourists on the island, but this year, following the damage from Hurricane Maria, only a few dozen people showed up, including a health insurance executive and a man overseeing oil spill cleanup for the Environmental Protection Agency.

Hurricane Maria affected nearly every person in Puerto Rico, including the island’s Jewish community, which numbers between 1,500 and 2,500. Rabbi Zarchi said he lost power in his house for two months and slept on an air mattress in the synagogue. The director of another Jewish center suffered searing back pains from lugging fuel for his generator. Conversation in the Chabad Center veered quickly from the spiritual to a spirited discussion about the benefits of natural gas generators.

In this atmosphere I met Mely Revai as we both sampled latkes — potato pancakes — made by the rabbi’s wife.

I asked Revai if she's from Puerto Rico.

Revai, 58, was a doctor in the Venezuelan capital of Caracas before she moved to San Juan in December 2016. She and her husband were just settling into their new life when the hurricane hit and knocked out the lights.

So this year, the candle lighting of Hanukkah seems especially significant, Revai says.

“A little light can dispel a lot of darkness. And you need to keep that light on in your heart to be able to overcome all the problems that life throws at you sometimes.”

I was intrigued at how Puerto Rico, a storm-tossed island, might also be a refuge. So I went to visit Revai at her home. She and her husband now live in an apartment building in the Carolina suburb of San Juan, on a busy street lined by restaurants that are newly reopened after the storm — though some still have battered rooftops.

Revai was ironing her husband’s shirts when I arrived. She was eager to finish the housework before the start of the Sabbath at sundown.

“It’s supposed to be permanent press but it’s not,” she said as she smoothed out a blue and white plaid shirt. “You always have to give it a going over.”

Revai doesn’t work as a doctor now; she says it would take too long to get licensed in Puerto Rico. She was born in what was Communist Romania. Her family fled to Venezuela when she was a baby, and she spent almost her whole life in Caracas. Revai estimates that there were about 30,000 Jewish people in Venezuela at one point, but many of them emigrated as the economic situation deteriorated. Revai could see that decline on the streets.

“There were more people looking for food in the garbage,” she said. “The roads were not kept well … And it was even getting dangerous to walk to the synagogue, so we stopped going Friday night to the synagogue.”

Her daughter moved to Boston for college, and her son moved to San Juan, where he now works in the family lumber store with offices in Venezuela and Puerto Rico. With no family left in Caracas, Revai and her husband eventually followed. They found an apartment in San Juan and started outfitting the kitchen.

“I told one of my girlfriends, it’s like we’re newly married again,” she recalled. “We go and buy dishes, and knives and cutlery and pots and pans.”

Revai’s husband went to work in the family store. Then in late September, as Hurricane Maria approached, Revai and her husband waited out the storm with their son’s family. The rain came pouring down, the hurricane-proof windows leaked and they dashed to keep the floor dry.

“You take a towel, you pick up the water, you drain it in the bucket and repeat as needed,” Revai said, sounding like a doctor prescribing medicine.

The day after the storm was the Jewish new year and Revai picked her way through the flooded streets to get to synagogue. Then her family assessed the damage. The electricity in Revai’s apartment was out — like just about everywhere else on the island — so she stayed with her son, his daughter and his wife, who was pregnant and due any minute even as many hospitals in the city had no power. (The baby arrived just as the hospital got its generator.)

The lumber store had lost its roof and walls, and the men in the family drove back and forth to work on the store, waiting hours in line for gas. Revai says that as someone who had just left Venezuela, watching that scene was eerie.

“It was very strange for us,” Revai said. “There were lines to go to the supermarket and lines to buy gas. But I thought well, it’s the United States, somebody has to help us.”

To cope with the strain, Revai went for daily walks on the beach and prayed for electricity.

After a month and a half in her son’s home, Revai noticed the street lights illuminating her block on one of her walks. A security guard in her building said the electricity worked and the couple moved back in.

“Three days after that, the lights went off again,” Revai said. “And we said we are not going to move back to my son’s house yet. Let’s wait a little bit.”

She still keeps cases of water by the front door, and an emergency lantern on a coffee table. There's also a Hanukkah lamp, one of the few possessions Revai brought with her from Caracas.

Revai pulled out a blanket she’s knitting for a friend in Israel who is expecting a new grandchild. Revai’s friends from Caracas have scattered. None of them are in Puerto Rico.

"That's the most difficult part,” she said. “I met some people on the beach, and the other people I met [are] in the synagogue, but most of them don't live here the whole year. So they come and go, and the social part is limited here."

She showed me a window where we could see the beach where she goes walking. Palm trees swayed in the afternoon air.

“Yes, they survived the storm,” she said.