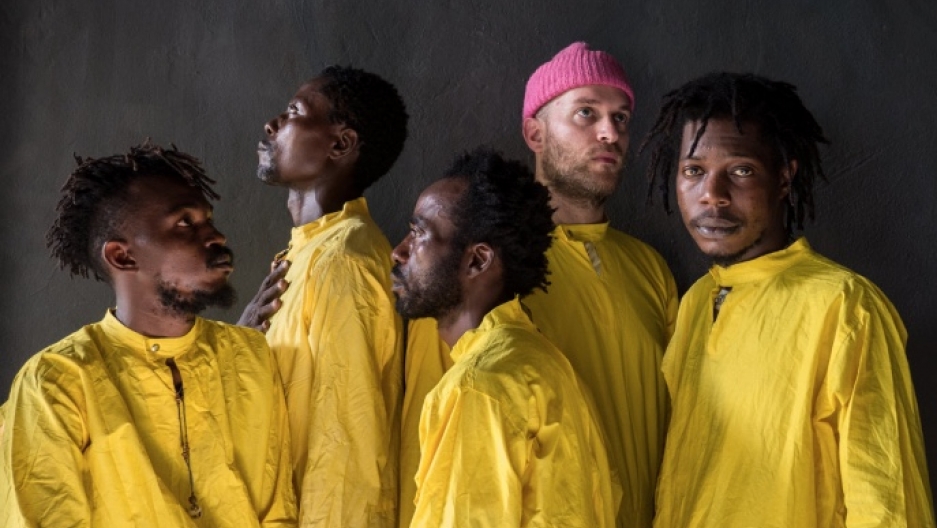 KOKOKO! makes afropop-infused experimental music that folds in the sounds of found objects from their home city, Kinshasa, Democratic Republic of the Congo.

A-side B-side is a recurring segment on The World that compares the sounds and ideas of two songs, albums or artists. On the A-side: a folk or traditional selection; on the B-side: a contemporary selection.

There’s a repetitive ringing, smacking, clunking and zinging when you use a typewriter. It turns a a writer’s thought process into a percussive rhythm. That familiar, vintage sound has been repurposed now — by the Congolese musical collective, KOKOKO!

KOKOKO! makes afropop-infused experimental music that folds in the sounds of found objects from their home city of Kinshasa, in the Democratic Republic of Congo. In a self-released documentary, the band explores why their music exposes such an experimental side of the genre.

The collective makes instruments out of found objects, like glass bottles, coffee cans, CPUs, scrap metal and typewriters. "Tokoliana," a single on the group's latest EP, is a bass-driven track that is broken up by the tinkering and buzzing sounds emitted by metals, plastic and glass.

In some instances, a guitar (actually a metal can, pipe and string) imitates a cross between a muted electric guitar and a fiddle. There is a very distinct approach and sound being cultivated by the group.

There are a variety of found and natural sounds in the Smithsonian archives — cataloguing noises as diverse as cities and tropical forests (and even a few typewriters). People interacting with natural sounds connects the water drum used in West Africa to contemporary music made by collectives like KOKOKO!.

In western Africa, the water drum is often made from a gourd that floats in water and drummer plays it with sticks. However, in this piece from The Arthur S. Alberts Collection: More Tribal, Folk, and Café Music of West Africa, the performers in "Bindendela: Water Drums" hit the water with their hands.

The sound of the water drum without a floating gourd is still resonant. The percussion in this song adds its own unique elements to the song.

Both "Tokoliana" and the "Bindendela: Water Drums" are two interpretations of using found sounds and objects to make a distinctive sound.