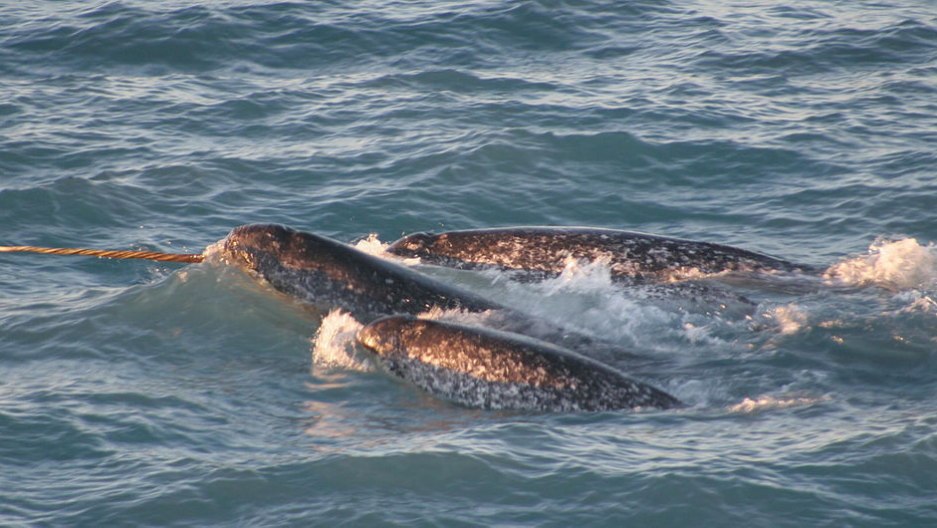 The heartbeat of narwhals actually lower while under stress, even as they exert extra energy to flea the stressor, according to research that was recently published. Scientists have labeled this reaction as a “paradoxical fear response.”

The heartbeats of most species, when frightened or stressed, tend to quicken. That is not so, however, for narwhals. When the marine mammals encounter stress, their heartbeats tend to, yes, lower — in spite of the fact that the creatures already have a staggeringly slow heartbeat of 10 beats per minute when in the act of diving down into icy waters to conserve oxygen and hold their breath for extended periods of time.

This phenomenon finds itself at the center of research conducted by a team of scientists that was recently published in Science, in which heart-monitoring electrodes were attached via specialized suction cups to observe the behavioral and physiological responses of narwhals. Findings from the team’s study could pose a serious threat to the species given the increased human activity (namely the rise in oil and gas exploration and shipping) and melting sea ice in the narwhal’s native Arctic waters off the northern coasts of Greenland, Russia and Canada.

“When the data came through from our recorders, it’s one thing to write down the number three to four beats per minute, but when you have to sit between those pauses in the heart — and we're calling it ‘cardiac freeze’ — you get a real sense of what's happening to this animal,” says Terrie Williams, a comparative wildlife physiologist at the University of California, Santa Cruz, who was one of the members of the international research team.

Furthermore, it’s not as if the toothed whale — known for its long, protruding tusk and its moniker of “unicorn of the sea” — is remaining still.

“That was the shocking part,” Williams says, who has studied exercise physiology in a wide range of both marine and terrestrial mammals. “You think about an escape response for an animal, and they have two choices. Just fight and flight and get the heck out of danger or to hunker down like a scared rabbit. And now we've got two things happening at the same time: a heartbeat that sounds like a scared rabbit and then they're swimming as fast as a narwhal can swim.”

These conflicting actions lead the team to a series of questions: How do narwhals get oxygen to the brain? How do they thermoregulate (control one’s body temperature) without a properly working cardiovascular system?

“The honest truth is we don't know just yet,” Williams says.

What is known is that the size of the narwhal’s heart is no bigger than that of a large cat, such as a tiger. In addition, the narwhal’s aorta hardly bears a resemblance to that of most mammals. Instead, it functions more like how hearts of fish in the Antarctic do.

“We [humans] have sort of this tube coming out of our ventricle known as our aorta, and that's going to direct blood,” Williams says. “The narwhal doesn't have that. … It almost looks like a weather balloon sitting on top of their heart instead of an aorta, and it's enormous.

“It's this elastic balloon that if you imagine the heart beating and it pulses blood into this balloon. It expands out and then over time, we think, that it slowly just lets blood leak out for that period of time in between the peaks.”

While it may be natural to think the narwhal’s conflicting responses can be credited as an evolutionary/adaptive trait, Williams says that the response simply does not “make sense” when considering that two opposing signals are being sent to the narwhal’s heart.

“You have a set of nerves that are saying ‘beat faster’ and a set of responses are telling you ‘beat slower,’” she says. “And in fact not only beat slower but beat at a very, very slow level. And in other animals and in humans this can lead to fatalities.”

In past studies, Williams and associates have studied the narwhal’s skeletal muscles, revealing that the 90 percent of its muscles are composed of slow-twitch fibers — putting on the opposite of the spectrum from the cheetah. To compare, a human has an approximately 50/50 ratio of soft- and fast-twitch fibers.

“I've never seen an animal quite like that,” William says. “It couldn't swim really fast if it wanted to.”

Which can be a major problem for a shy creature that has lived in relative isolation for millions of years. Now, it faces the possibility of ships coming in and human contact from gas, oil and mineral exploration — to go along with the melting of sea ice.

“These are things that this animal has just not encountered,” Williams says. “And we're wondering if in fact the problem is going to be they've got this unusual — as we call it a ‘paradoxical fear response’ — that's occurring and their bodies just aren't built for it.”

Williams and her colleagues point to a series of mass-stranding events that have taken place in recent years, in which deep-diving whales have been found mysteriously beached upon the coastlines. Earlier this year, such an event took place in New Zealand in which hundreds of pilot whales were found at once on a beach on the country’s South Island.

“We're beginning to wonder if this is part of that phenomenon that there is something going on with the heart, cardiovascular system and brain,” Williams says.