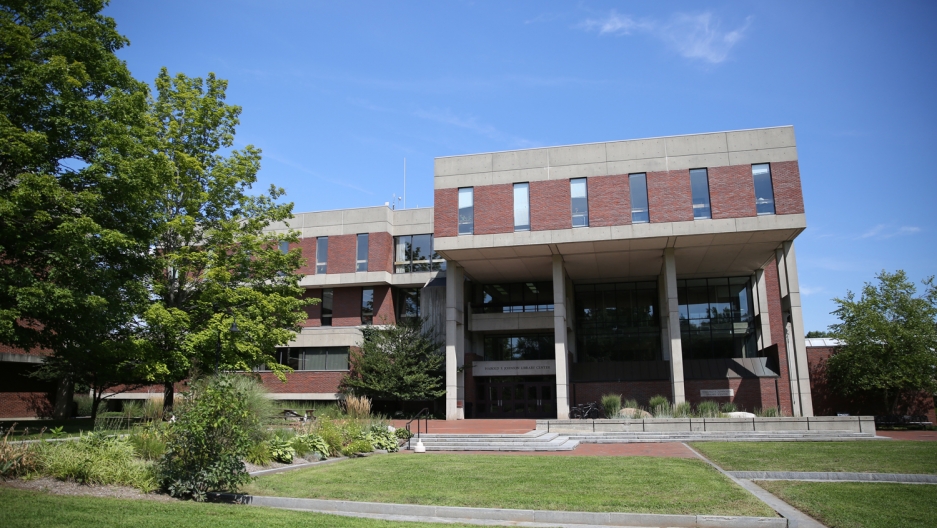 Hundreds of US colleges and universities are taking action to combat global warming, but so far just one residential college has turned 100 percent to renewable energy: Hampshire College.

To get there, the Massachusetts college has installed a 19-acre solar farm, complete with 15,000 panels. Together, the panels will produce about 4.7 megawatts of power each year — more than Hampshire can even use, says Jonathan Lash, its president.

Lash, the former head of the World Resources Institute, joined the college in 2011. A year later, he says the administration considered installing solar panels but ultimately decided it would just be too expensive.

“Now, we looked again in 2015 and the price had come down so much, the efficiency of the panels had gone up so much, that we were able to move forward and have it be an overall savings rather than an expense for the college,” he says. “We would do this just for economic reasons, but there are a lot of other reasons as well.”

Lash explains that under the contract Hampshire signed with SolarCity, the solar provider paid to install the panels, while Hampshire supplied the land. “And, we've signed a contract to buy all the power coming from the panels,” he says. “We pay them a little over 6 cents a kilowatt-hour. If we buy the electricity from the grid, we pay about 13.5 cents a kilowatt-hour, so it's a big savings.”

SolarCity also provided the school with a bank of Tesla batteries to store up power. Lash says that allows the school to keep using its solar-sourced electricity on cold winter nights and other peak times, rather than buying power at the same time everyone else is. “That's good for us and it's actually helpful for the utility,” he notes.

Over the life of the solar farm, Lash estimates the college will save $8 million to $10 million in total. “That's a big deal,” he says. “It's really important.”

But he says the system’s curriculum benefits are even more important. Students have been involved in every aspect of the decision-making — from the initial cost-savings analysis to selecting a site, choosing a contractor, working with the college’s neighbors and now, managing the system, he says.

“This is the challenge that our students and every other student is going to face in the next 20 years, how to turn the US economy into a low-carbon economy,” Lash says, “and they're going to get the real firsthand experience of doing it. So that was reason number one.” Plus, he says, making the switch to renewable energy is “just the right thing to do in an era of accelerating climate change.”

“This keeps the jobs local,” he adds. “It means that there are no pipelines being built through people's communities to get power to our college. And it helps, in the best way that we can, to avert climate change — the costs of which are falling most heavily on the poorest, most vulnerable people.”