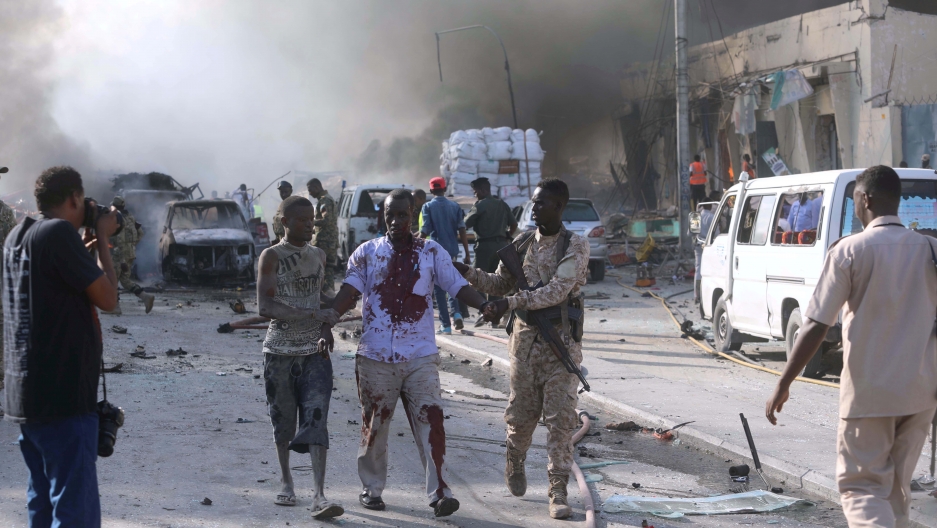 A Somali government soldier evacuates an injured man from the scene of an explosion in Mogadishu, October 2017.

Ninety-two Somali immigrants, set to be deported from the US, found themselves shackled at the hands and feet and kept aboard a plane for two days earlier this month. That part of the story is not in dispute.

The Somalis left Louisiana on Dec. 7. Their flight, chartered by US Immigration and Customs Enforcement, was bound for Mogadishu, the capital of Somalia. But the plane never arrived.

After landing in Dakar, Senegal, on Africa's west coast, the one-way flight became a round trip, back to the US. Why that happened, though, remains subject to dispute.

The 92 immigrants, now being held at the Krome and Glades detention facility outside Miami, are consulting with their lawyers.

The passengers say they were denied food and water and weren't allowed to use the bathroom. “One of my colleagues characterized them as slave ship conditions,” says attorney Kimberly Hunter, who represents two of the passengers on the flight.

“ICE disputes accounts about lack of adequate food, water and restrooms — although those inadequacies are consistent with reports that we've had from our clients,” she says.

According to ICE, the flight was returned to the US because the relief flight crew was unable to get sufficient rest.

"So [the passengers] were held on the tarmac to allow the crew to rest and subsequently, due to ‘logistical concerns,’ returned to the US,” Hunter says.

But Hunter believes the flight was turned back for another reason.

“Somali media report that, due to protests taking place in Mogadishu pertaining to the Jerusalem decision by [the Trump] administration, the security situation just became completely untenable as far as allowing that flight to land,” she says.

Hunter believes ICE will try to send the group to Mogadishu again soon. Once in Somalia, even those who might have grounds to appeal their deportation will be unable to return.

One of her clients, Abdoulmalik Ibrahim, could, in theory, be allowed to return to the United States because his American wife is entitled to file a petition for him.

“But he's got no way to actually return now or in the near future, with the fact that the Somali travel ban has recently been allowed to continue.”