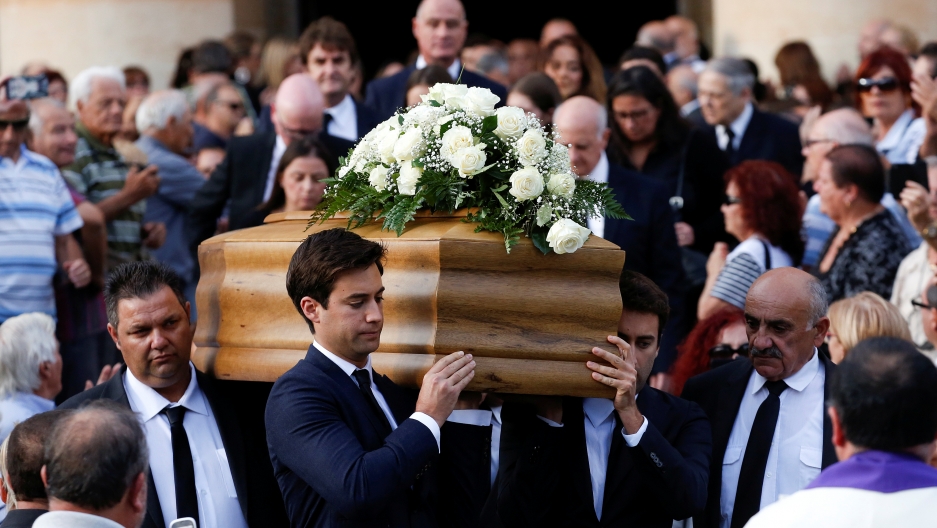 Journalist Daphne Caruana Galizia's sons Matthew and Paul carry the coffin of their mother, who was murdered in a car bomb attack, as they leave from the Rotunda Parish Church in Mosta, Malta, Nov. 3, 2017.

It was just before three o’clock on the afternoon of Oct. 16 when Malta’s most famous, outspoken blogger got into her car for what was to be the last time.

Minutes later, a bomb planted under the driver’s seat flung the vehicle into a field beside the road. Daphne Caruana Galizia, who’d relentlessly attacked corruption in the tiny island nation, was dead.

Related: Maltese journalist known for taking on powerful 'crooks' is killed by a car bomb

The very last entry on her blog, "Running Commentary," which was read by almost the whole of Malta, said, "There are crooks everywhere you look now. The situation is desperate."

Her murder — the very rare targeted killing of a journalist in a Western European democracy — was condemned by politicians around the world.

Malta is mainly known as a sunny, tranquil Mediterranean archipelago. But after the bombing, the European Union said it had “serious concerns" about the rule of law on the Mediterranean island.

Two months later, three men have been charged in connection with her murder. But many Maltese are angry about their government’s response to the assassination.

Manuel Delia, a blogger who was mentored by Caruana Galizia in the last months of her life, says, “There is no doubt in my mind that this was a political killing.”

He and other civil society activists accuse the authorities of trying to give the impression that it might have been linked only to criminals in Malta’s underworld.

Caruana Galizia’s investigations covered many targets. But her most famous and explosive reports involved claims — all denied — about secret bank accounts allegedly held by senior government officials and the prime minister’s wife.

Caruana Galizia’s family, who are supported by many campaigners, have demanded that the police chief leading the murder inquiry be removed because he is married to a government minister.

But the government rejects that demand. Deputy Prime Minister Chris Fearne says, “We’re a small island and people marry each other. He is one of the best investigative officers we have for homicides.”

A magistrate’s inquiry into the killing is continuing — and the authorities say they are giving the police all necessary resources to get to the bottom of the case.