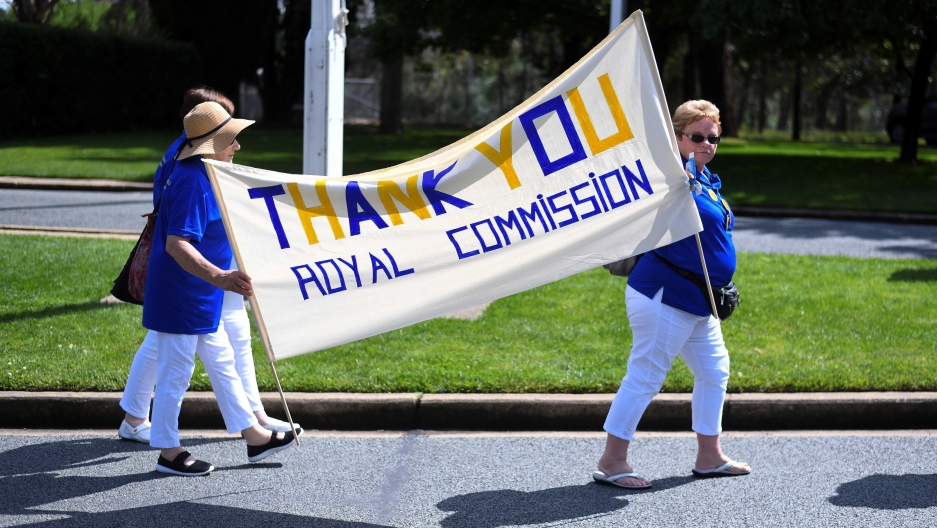 Members of the Care Leavers Australia Network hold up a banner thanking an Australian government commission on preventing child sexual abuse as they await a final report outside Government House in Canberra, Australia on Dec. 15, 2017.

That’s how the Australian prime minister characterized the findings, released Friday, of a five-year investigation into child sexual abuse.

Malcolm Turnbull on Friday extended his gratitude to thousands of survivors who were brave enough to tell their stories. “It’s been very tough, often harrowing work,"  he said, "but above all I want to thank and honor the courage of the survivors and their families who’ve told, often for the first time, the dreadful stories of abuse that they received from people who actually owed them love and protection."

The investigation involved 8,000 testimonies of child sexual abuse going back decades and occurring in all sorts of Australian institutions, including schools, foster homes, sports clubs, the military and churches.

“Tens of thousands of children have been sexually abused,” the report said. (Read the final document here.) "We will never know the true number. It is not a case of a few 'rotten apples'. Society's major institutions have seriously failed."

Speaking to the BBC, Leonie Sheedy from the survivors’ support organization, Care Leavers Australia Network, said the release of the inquiry’s final report today was momentous.

“The country now knows that children in Australia’s orphanages, children’s homes, missions and foster care were sexually used by the churches, charities and the state government. And they know they can no longer hide this horrible history,” Sheedy said.

“We deserve justice. We deserve redress for all forms of abuse and neglect,” Sheedy continued.

The commission outlined extensive recommendations aimed at building a new national strategy in Australia to prevent child abuse, calling for the creation of a new government office for child safety. It said that the failure to protect children from abuse inside an institution needs to be a criminal offense.

The findings are particularly damning for the Catholic Church in Australia. Between 1950 and 2010, the commission alleges that 7 percent of Catholic priests in the country abused children. More than 4,400 people claimed to have been victims of the Catholic Church between 1980 and 2015.

The commission recommends that the church take some dramatic steps. It suggests getting rid of its celibacy requirement for priests, for example, because while the requirement was “not a direct cause of child sexual abuse,” it had contributed to the problem, “especially when combined with other risk factors.”

The report also said Catholic clergy should ask the Vatican to amend rules that prevent disclosure of allegations of child sexual abuse to authorities when those allegations were presented during private confessions.

The Catholic archbishop of Melbourne, Denis Hart, pushed back against those recommendations. He said the seal of secrecy for confessions, “can’t be broken.”

“The penalty for any priest breaking the seal is excommunication,” Hart said. But he added that he would encourage anyone who divulged crimes of child sexual abuse to admit those crimes outside of the confessional booth.

Hart said he did not want celibacy laws for clergy to change. But he reiterated the Catholic leadership’s “unconditional apology for this suffering and the commitment to ensuring justice for those affected.”