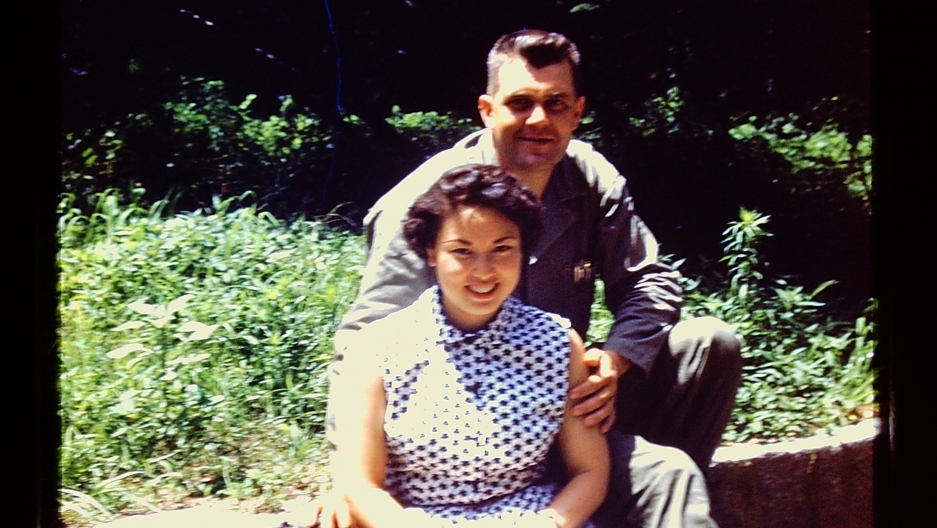 Sook Ei and George Lampman met at the US embassy in Seoul in the months before the start of the Korean War.

Courtesy of the Lampman family

George Lampman is a veteran of the Korean War, but he didn't get through it alone.

George first arrived in Seoul as a 21-year-old Marine, part of a security detachment at the US Embassy. It was 1949.

He vividly remembers meeting Lee Sook Ei, a switchboard operator at the embassy.

“She was a beautiful girl [and] very, very intelligent,” George says.

He tried to ask Sook Ei out more than once, but he struck out.

"Years later, I asked her, how come you never went on a date with me when I asked you? She said, 'I always liked you too, but my mother didn't like anyone going out with me,'" George recalls.

It wasn't just her mother who kept them apart.

When North Korea invaded the South on June 25, 1950, George was evacuated to Japan and then reassigned to the American Embassy in Saigon, South Vietnam. He returned to South Korea a few months later, after the US military liberated Seoul.

Sook Ei was back at her job, too, and George finally got permission from Sook Ei's mother to take her out.

Their romance blossomed as US troops made advances into North Korea.

George says in those early months of the war, everyone talked about how it was all but won. He recalls people saying "all the boys will be home by Thanksgiving, we got it made, onto the Yalu!"

In that atmosphere, he and Sook Ei got married in a traditional ceremony at her family's home in Seoul. At that time, Lee Sook Ei took George's last name.

Just a week after the wedding, everything changed.

Chinese leader Mao Zedong sent an estimated one million soldiers across the Yalu River into North Korea to save his Communist ally and push American and UN forces off the Korean peninsula.

Mao’s army swept southward and was about to seize the South Korean capital once more.

George says he remembers arriving at the embassy one morning and being told by a colleague that just about everyone had already fled.

George packed a truck with some supplies, and he and his new wife headed out of the city, bringing with them 19 South Korean employees of the US embassy.

Their journey to Busan took two days. George remembers how the dirt roads were packed with people fleeing and soldiers bugging out, littered with ox carts and broken-down vehicles.

Along the roadways, George saw families huddled together, apparently having frozen to death trying to escape.

The Korean War continued for nearly two more years, concluding with a cease-fire agreement in 1953. George and Sook Ei left for the US in 1951 to start a new life. They eventually settled outside of Washington, DC, and had four children.

The retired Marine says Sook Ei studied English, learned how to cook American food and "kept a garden that was the talk of the neighborhood.”

He doesn’t recall telling his family too much about the war but his daughter, Margaret Philips, says her mother described the time when their marriage began as “the highlight of her life.” 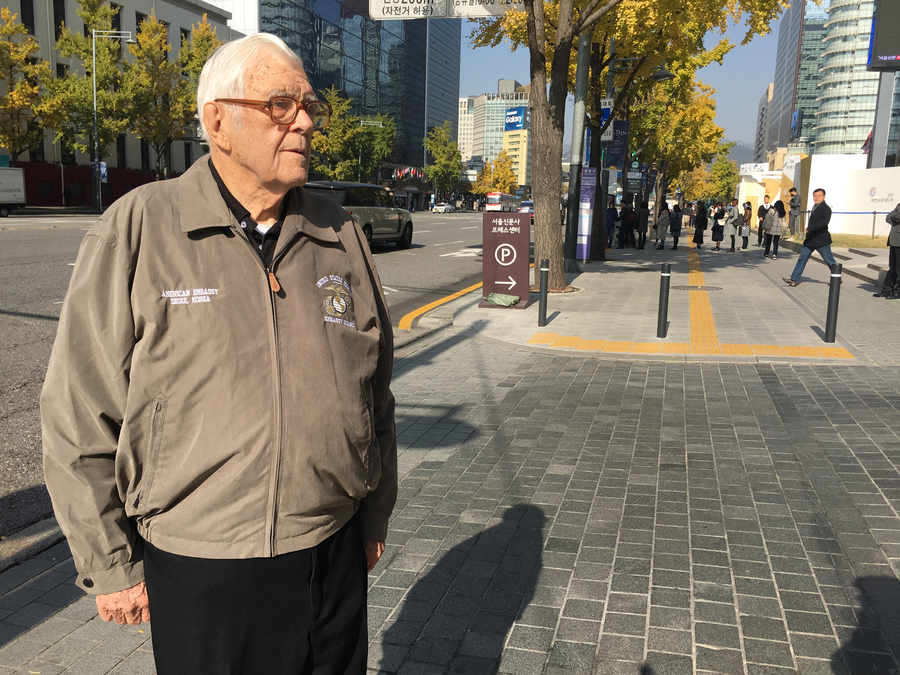 George Lampman in Seoul in 2017. The city has changed a lot since he first arrived there as a young marine in 1949.

In 2015, the entire family made its first trip to Seoul.

George says he and Sook Ei wanted to show their kids where their mother was born, but as he puts it, "fate called the game" one night.

"We went back to our hotel room and unfortunately, Sook Ei died in her sleep,” he says. “Scarcely a mile and a half from where she was born, 85 years later, she died."

This fall, George, who’s now 90, returned to Seoul, as tensions are rising on the peninsula and fears about another conflict with North Korea loom. He spoke to students at his late wife's elementary school.

He says he plans to place a small memorial there in honor of the woman who survived the Korean War with him all those years ago.

“No one could have looked after me the way she did,” he says.