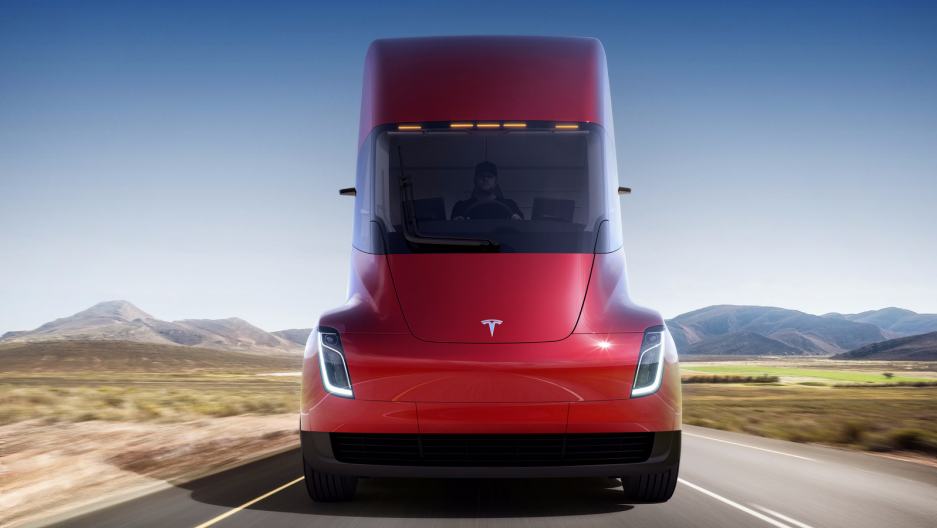 When you imagine a semitrailer that can chug down the interstate hauling 80,000 pounds of warehouse goods, what does it look like?

Chances are, the truck in your mental image isn’t electric — but Tesla CEO Elon Musk wants to change that. Musk recently unveiled the Tesla Semi, a big rig that he says will cost about 20 percent less to operate than a traditional diesel truck. (Although, its price tag still packs a punch — the base-level Tesla Semi is expected to cost around $150,000, with a 300-mile range.) The truck is slated to begin production in 2019.

“It's incredibly sleek, very, very aerodynamic,” says USA Today technology reporter Marco della Cava, who attended the semi unveiling event in California. “It just looks like a regular truck, but as if Batman had designed it, to be honest.”

And as della Cava explains, the design inside the Tesla Semi is no less cutting-edge. The driver’s seat is front and center in the cab and flanked by two touchscreens. And because there’s no long hood covering a diesel engine, “you have this almost captain's view of the world,” he adds.

According to Musk, one version of the truck will be able to haul its max load at highway speed for 500 miles before needing to recharge. That’ll make it ideal for short hauls between distribution centers and major populations, della Cava says — at least until Tesla can build a network of “Megacharger” charging stations to recharge the semis on the road.

“So, let's say you've got an Amazon distribution center in the middle of rural California or rural Nevada, and you've got to get stuff to Los Angeles or to San Francisco,” he says. “There, you're talking about 250 miles roughly each way. It's that sort of a run that we're talking about.”

So far, however, industry response to the Tesla Semi has been mixed. (Della Cava covered some of the lingering questions in a follow-up article for USA Today.) In early December, Anheuser-Busch and food giant Sysco announced pre-orders of 40 and 50 Tesla Semis, respectively. Walmart and transportation company J.B. Hunt have also placed reservations for the truck, a move that della Cava calls a “no-brainer” for big companies.

“For a company like Wal-Mart, investing a couple million dollars in cutting-edge technology, it might even be worth that alone in publicity to say that you're trying to go green with your fleet — and the things certainly look arresting on the road,” della Cava says.

“I think it's another story to have Joe and Jane Trucker consider maybe buying these.”

In fact, della Cava says he’s been told by industry experts that while the Tesla Semi may look cool, the trucking world won’t care unless it comes with significant cost-per-mile savings. Musk understands that, della Cava adds, explaining that Musk is even marketing Autopilot — the feature made famous by Tesla’s luxury cars — as a cost-saving mechanism on Tesla trucks.

At the unveiling, Musk “threw up a video illustration of three trucks in a convoy,” della Cava says. “The trucks would be closely following each other using autopilot technology to stay a certain distance apart and just convoying for hundreds of miles. He threw that up there not so much to show off the autopilot, but to point out that additional cost-per-mile savings would be available when three or so of his trucks convoy together.”

But unsurprisingly, della Cava also notes some truck drivers are wary of the Semi’s autonomous side. “They don't want to be replaced, needless to say,” he adds.

As for the industry at large, “a lot of people in the traditional trucking world argue that diesel is a perfectly suitable means by which to power a truck,” he says. “They've gotten it down to the point where you could certainly get a lot of miles to the gallon that route, and I think their argument is, why fix something that isn't broken?”