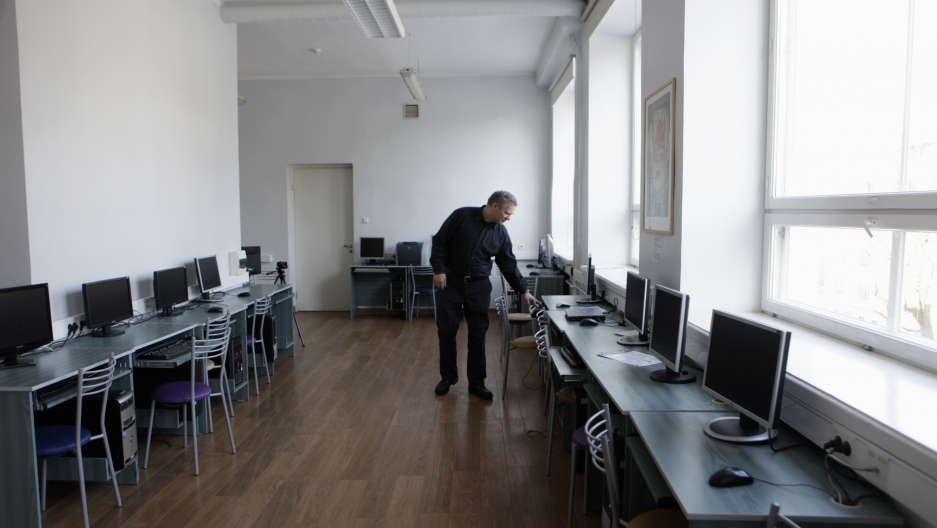 Informatics teacher Jevgeni Mihhailov inspects computers in an empty classroom in a school in Tallinn, Estonia, on March 7, 2012.

Here's a fantasy: A world where you never had to wait in line at the Department of Motor Vehicles. Save for the driving test, you could do almost everything online — from changing your address to renewing your license.

Other things in life — like voting and going to the doctor — would work just as efficiently. Any doctor you'd visit would already have access to your digitally stored medical records, and you’d never have to fill out one of those medical history forms in the waiting room.

In the event of an emergency, ambulance workers would be able to pull up that data using your digital identity number and understand your medical history.

To some, it may sound like an Orwellian dystopia. To others, it sounds like a digital utopia. In Estonia, it’s already a reality. The small Baltic nation has a population less than half of Silicon Valley, but has managed to put itself on the map though it’s E-Stonia Project, a government-led initiative that has digitized almost all aspects of citizen life.

Estonia’s former President Toomas Hendrik Ilves was a driving force behind the project. On a recent visit to Boston, he sat down with PRI’s The World for an interview on the ambitious undertaking.

What does it mean to live in a digital society?

It's nothing too sophisticated. It simply means that you can do digitally what you otherwise do on paper — and it's more transparent, more open, faster and efficient. It's really not that odd at all. It's just you think about — instead of signing papers and having them move from one place to another, you sign something digitally. You have a legal signature that works in digital space — and you can do it from home, rather than having to go stand in line in different offices.

Where does transitioning in a digital society leave the government? Does it render it obsolete?

It’s really administration we're talking about. In the European sense, the government is the elected cabinet, and the administrative side is what becomes increasingly transparent, but also decreases in size. There are simple decisions that don't require human intervention.

In my own country, after you do your drivers test you don't go to the DMV — even if you have to do an eye test. You go to a doctor, and the doctor sends in the information that now you need glasses, for example. There's no need for all of that brick-and-mortar and flesh-and-bone bureaucracy when the decisions can be made more efficiently and more honestly by algorithms.

First of all, we clearly proscribe who can look at what, and every interaction is logged. If anyone looks at something, you know who's looked at it. If someone looks at it who shouldn't be looking at it, it immediately sets off an alarm.

And why I find the question about privacy kind of bizarre is, compared to what? I mean, if all the same data are in paper form, there is no record of who's got in there and looked at your data.

How is Estonia keeping all this data safe?

Our data are on blockchain, which means that you can't change the data, or any change can only be made by individuals you authorize — yourself or your doctor, for example. You own your data.

You’re a visiting fellow at Stanford University. What’s your assessment of American bureaucracy? Where does it sit on the evolutionary timeline?

The biggest shock of being in Silicon Valley, the Mecca of innovation and IT, is that the bureaucracy is stuck at a level that has really not substantially changed since the 1950s. I think that is at the same level as elsewhere in the United States. It's just the contrast is especially strong where, within 10 miles of me are the headquarters of Facebook, Google, Apple, Tesla.

You can do all kinds of things, like play with augmented reality. But if you have to prove that you live where you live or get your child to be registered for school, you have to come in with a paper copy of your electricity bill. The reality of your sort of life dealing with bureaucracy it is not touched by the digital revolution.