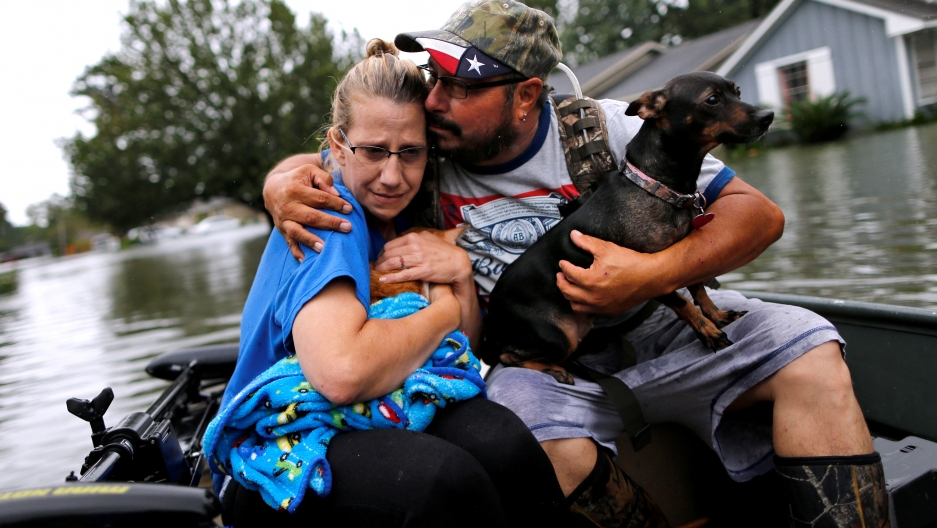 David González comforts his wife Kathy after being rescued from their home flooded by Tropical Storm Harvey in Orange, Texas, Aug. 30, 2017.

Climate change fueled some of the record rainfall Hurricane Harvey dumped on the Houston area in August.

Two new scientific studies find warmer temperatures caused by global warming likely increased the amount of rain that fell over the Gulf region during the storm by between 15 and 38 percent.

Some of that increase can be explained by the warming of the Gulf of Mexico, which has increased evaporation and the ability of surrounding air to hold water. But the rest was a surprise, says Geert Jan van Oldenborgh, lead author of one of the studies.

“We expected at least the 6 or 7 percent [of increased precipitation] that you get from an increase in moisture in the atmosphere,” says van Oldenborgh. “We were surprised to find more than that.”

Harvey made landfall on Aug. 26 and stalled over the Houston area for four days, dumping more than 4 feet of rain in some locations. The storm has been linked to more than 80 deaths and flooded tens of thousands of homes.

It’s the latest in a series of analyses done in recent years that pinpoint if — and how much — extreme weather events can be linked to climate change.

The study used rainfall data stretching back to the 1800s to calculate the historical likelihood of a storm of Harvey’s intensity occurring in the region. Using computer modeling, it then compared that to the likelihood of a similar deluge taking place in a world without climate change.

The other study released Wednesday at the annual meeting of the American Geophysical Union by Mark Risser and Michael Wehner from the Lawrence Berkeley National Laboratory in California used somewhat similar modeling methods.

David W. Titley, a Pennsylvania State University meteorologist who is an expert in the field of climate attribution, told The New York Times that the studies proved that “while a storm of Harvey’s strength is still rare, it’s not as rare as it once was.”

Titley was not involved in either report and said they were both “carefully done and combine observations with the latest simulation techniques.”

Van Oldenborgh and his collaborators analyzed only rainfall data, but wrote that sea level rise and its relationship to storm surges, as well as changes in land use patterns in the Houston area, should all be examined to determine how they might have impacted flooding during and after Hurricane Harvey.

“These results make a clear case for why climate change information absolutely needs to be incorporated into any plans to improve Houston's flood infrastructure,” Heidi Cullen, chief scientist at Climate Central and a co-author of the report, wrote in an email. “The past is no longer an accurate predictor of present or future flood-related risks."

While a storm like Harvey is still incredibly rare — the odds of one hitting the Gulf in any one year is less than 1 percent, researchers found —  it is growing more likely with climate change.

And if the world warms 4 degrees Celsius, as would be expected if we burn fossil fuels at the current rate, the World Weather Attribution study found storms like Harvey could be up to 10 times likelier and 50 percent more intense.