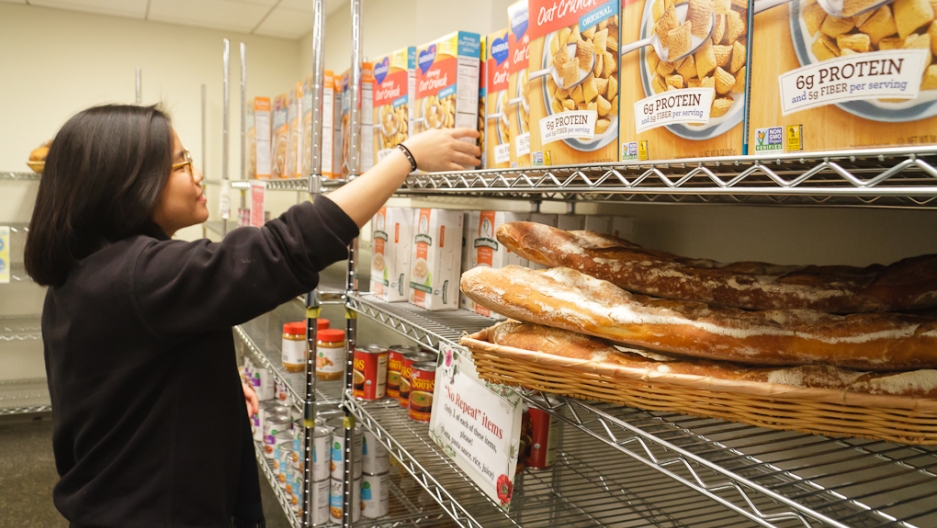 Carolyn Hsieh works at the University of California, Berkeley's food pantry, which provides free groceries for 2,000 students each month. The campus is providing more food and enrolling more students in assistance programs, in part because more students are now eligible for help.

Alejandra Hilbert is spending a Saturday morning in November applying for CalFresh, the California program that used to be called “food stamps.” She is one of 8,000 students at the University of California, Berkeley who have been notified that they may be eligible for government assistance of up to $192 each month to help pay for groceries.

Due to recent changes in state policies, more college students like Hilbert may qualify. One of the biggest changes is that students no longer need to work 20 hours per week if they are taking a full-time course load that will improve their chances of getting a job later.

Hilbert, the daughter of a single mother who immigrated from Panama and the first in her family to attend college, recently transferred to UC Berkeley after two years at a community college in Sacramento. She decided to live in a dorm, which stretches her budget, but she doesn’t have unlimited access to the cafeteria. Like many students looking to trim costs, she has a plan that offers only 10 meals a week.

Hear Hilbert talk about trying to make ends meet — and get an education.

“I have a choice between breakfast or lunch. Am I going to eat in the morning and make it to my 12 o’clock classes? Or am I going wait until 12 and then eat and then have to wait until dinner?” says Hilbert. “Also, I have nothing on the weekends.”

She’s double majoring in psychology and legal studies and recently started a part-time campus job for reserved for students with financial need — part of the work-study program — but her first paycheck hasn’t arrived yet.

Her friend Alexandra Medina also works on campus one day a week.  “It’s really challenging for me to save up that money and wait for every two weeks to use that money — and it’s not even enough for a week’s worth of food,” says Medina.

Hilbert and Medina both heard through social media that representatives from the university and local food banks, farmer’s markets and nutrition programs would be available at a one-day event to help students apply for and understand CalFresh benefits. California recently mandated that colleges inform low-income students if they might qualify for food assistance. Those who can apply include students with disabilities, former foster youth, those receiving government education assistance, such as Cal Grants or Pell Grants, those employed through work-study, or who are first-generation college students, including those enrolled in programs for underrepresented minority groups. 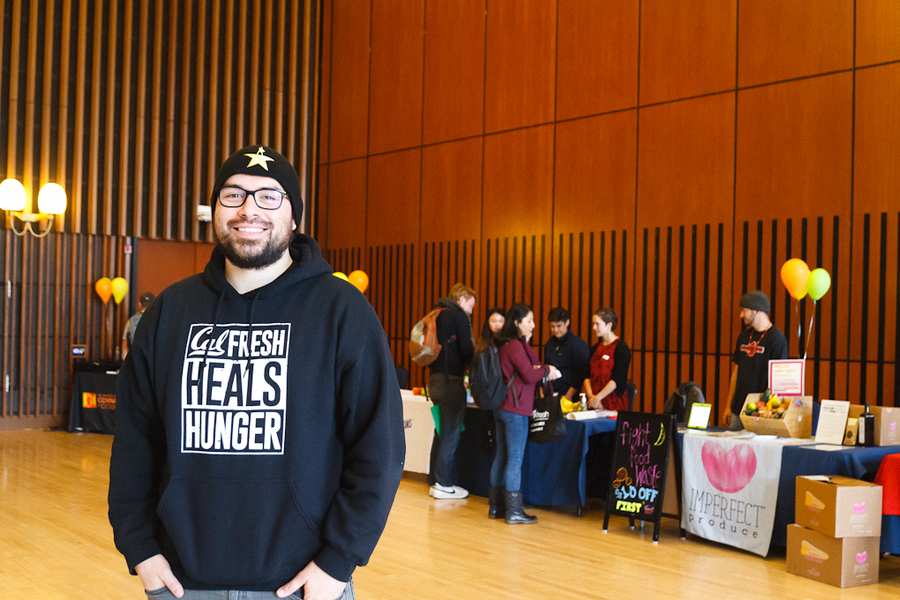 Ruben Canedo, chair of UC Berkeley's Basic Needs Committee, organized a clinic on Nov. 11, 2017 to help students learn about healthy eating and get help with the process of applying for CalFresh, California's food assistance program for low-income residents.

“We are consistently one of the most expensive college cities in the country. Berkeley students are being priced out,” says Ruben Canedo, chair of the campus Basic Needs Committee, which oversees access to housing, food and safety. He says that even if a low-income student receives state and federal grants, those funds would only cover one-third of the cost of tuition and housing. “They don’t support themselves the way those grants used to be able to support students.”

In the city of Berkeley, studio, one- or two-bedroom apartments on average rent for more than $3,000 per month, according to the online real estate database Zillow.

A survey conducted by the University of California at its 10 campuses revealed that one in five of its students skip meals to save money (PDF). But it’s not just a problem in California. In 2016, researchers at the Wisconsin HOPE Lab, part of the University of Wisconsin, Madison, studied nearly 4,000 college students in 12 states. Non-white students are more likely to be hungry: 57 percent of black students, 56 percent of Latinos and 45 percent of Asian students reported food insecurity. Among white students, the rate was 40 percent.

Some students at the Berkeley CalFresh event say they previously avoided applying for assistance because they were afraid the process would be confusing or full of red tape. Others say they didn’t need benefits in the past, but circumstances have changed. Su Sone, a fourth-year student majoring in nutritional science, is among the new applicants.

“I was working at Cal Dining 20 hours a week last year. I know I qualified, but I was getting money so I didn’t really need it. I recently quit my job because I was getting behind on the classes. Now, I need money for food,” she says.

“I feel there is a definitely a stigma to it, especially when you refer to the old title which is ‘food stamps.’ People think that it’s a government handout,” says Hong Heng, a fourth-year philosophy major who also works as the campus CalFresh coordinator. “But we just try to tell students this is just a program that they can apply for that can help them with their budget.”

Heng knows about the need firsthand. “Last year, I was honestly living through things from the food pantry,” she says.

She says she might have withdrawn from the university if not for that help. Like many universities, UC Berkeley operates an on-campus food pantry stocked with cereal, pasta and canned soups, along with baguettes donated by local bakery Acme Bread and fresh farmers market produce. Students can visit the food pantry twice a month — no questions asked. But they can only pick up five items each time. 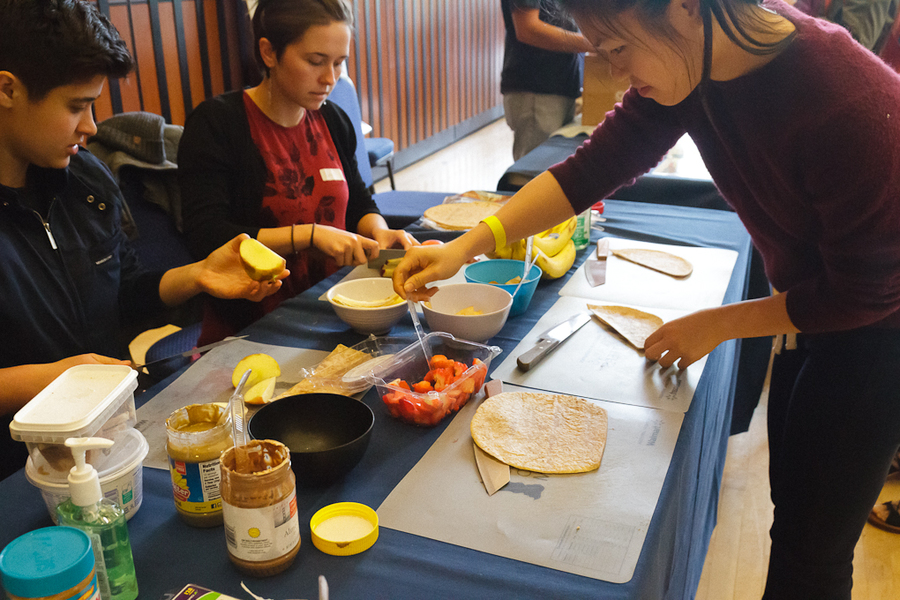 UC Berkeley student Su Sone learns how to make a low-cost, healthy breakfast wraps at the CalFresh clinic on Nov. 11, 2017. The clinic was held to help students learn about state assistance programs and how to buy and prepare affordable, healthy groceries.

“That’s not a lot,” admits Heng, who now receives $190 each month from CalFresh. “It’s nice to get fruit and vegetables and make something that’s hearty that I want to eat, and not spending that to eat a slice of pizza because it’s cheap.”

Even with the push to encourage students to apply for CalFresh, there’s still one group that isn’t eligible: undocumented students — even those who are protected under DACA, the Deferred Action for Childhood Arrivals program that is now being drawn down. “The more students get on CalFresh, the more we can free up food pantry for those who can’t qualify,” says Canedo.

And the demand for food is increasing.

“In the past month, the food bank served 2,000 students, outpacing the entire first year,” says Fabrizio Mejia, the assistant vice chancellor of Student Equity and Success.

The university is expected to spend about $500,000 this year to stock the food pantry. But student activists say that isn’t enough. They are challenging alumni and other donors to raise $2 million for the food pantry. They say that the university found $1.4 million to spend on additional security for planned events with white nationalist Milo Yiannopoulos last spring and this fall, both of which were ultimately cancelled.

“We are hoping to use that as a statement to show the campus administrators that perhaps our priorities are a little skewed right now,” says Sara Tsai, a UC Berkeley sophomore who works for the Basic Needs team and also advocates for students.

Food policy analysts say it’s hard to estimate how many additional college students will start receiving payments, as each application must be evaluated by a social worker to ensure students meet the academic requirements. Hilbert, the junior who is hoping to supplement her dorm meals with CalFresh, says that better access to food will actually help her to stay enrolled full-time.

“We shouldn’t be worrying about where our next meal is coming from. We should worry about how we’re going to excel in education and help further generations or other people that we came to seek out an education to help in the first place,” says Hilbert.

She found out  a few weeks after the clinic that she does qualify for CalFresh benefits.

Each of the nearly 200 applications filed by UC Berkeley students at the November event will be individually evaluated; so far 80 percent of the people whose applications have been processed have been approved.