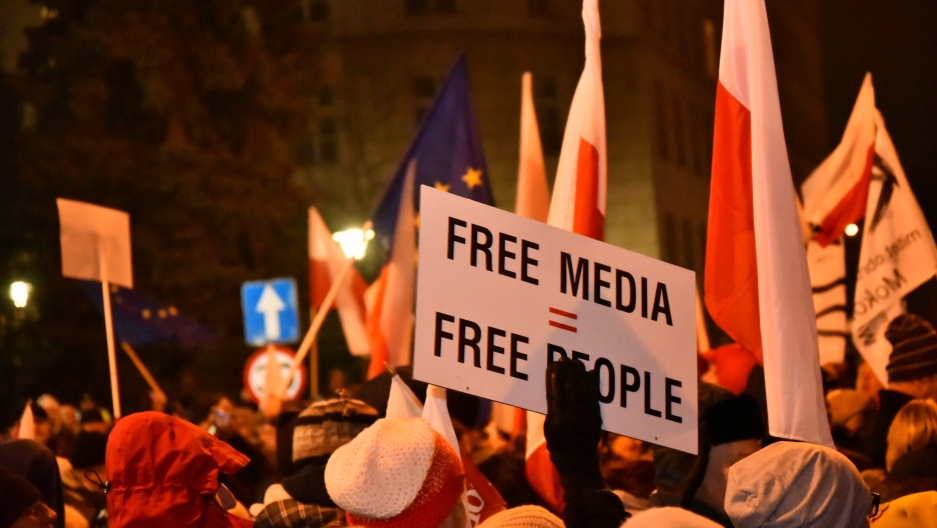 Polish protestors demonstrate their opposition to new restrictions for media in front of the parliament building in Warsaw, Poland.

Poland's ruling party has used the term "fake news" to attack its critics in the media. Monday, the government took its attack a step further. It levied a $415,000 fine on TVN24, a US-owned independent Polish news channel, saying the broadcaster's coverage of anti-government street protests had encouraged illegal activities.

"The government disliked the way that this television channel portrayed some demonstrations that were actually a year ago," says Washington Post columnist Anne Applebaum. "It's unprecedented. Now they decided that the portrayal of anti-government demonstrators somehow violated the law or was against the national interest."

TVN24 is the most widely watched independent broadcaster in Poland.

Polish regulators did not describe exactly how the station had violated the law in its coverage of the protests.

Applebaum says Poland's government is taking a cue from Washington's attitude toward journalists and has embraced "the idea that it's OK to not just push back against the media, but to criticize, to punish and to try and ban critical media. I think that the fact that the US president now does that and he is very much, you know, somebody who's followed and whose moves are watched carefully in Poland, makes a big difference."

TVN SA, the owner of the TVN24 channel, says it will appeal what it calls an "unfounded" penalty. TVN SA is controlled by the Scripps Networks Interactive company, which owns such major US channels as the Food Network and HGTV.

"We have to wonder if it's the [Polish] government trying to intimidate the American owner, or persuading them to sell these channels. ... It's actually the biggest US investment in Poland. It's a multi-billion dollar investment, I should say. Because it's not just the news channel, it's many other things as well — food channels and entertainment channels," Applebaum adds.

This summer, Scripps agreed to be acquired by the Discovery Channel, creating a US TV titan.

"So the question is, is Discovery Channel going to be intimidated by this? Will they sell off this TV station? Will they end their support for independent media in Poland or will they, on the contrary, ask the US ambassador and the US government to back them up and to protest against this outrageous decision?" she says.