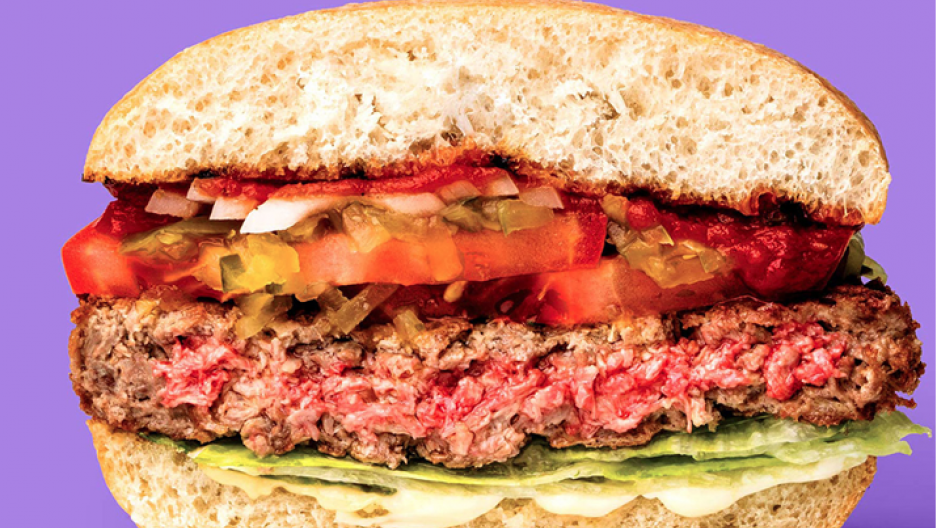 Impossible Foods, a Silicon Valley-based company, has rolled out its new Impossible Burger, genetically engineered from plant protein to look and taste as much as possible like red meat.

The new burger, and a similar product from a company called Beyond Meat, seems to be marketed to win over people making the transition from eating meat to a more vegetable-based diet, while not depriving them of the flavor. These products are already available in some restaurants and specialty stores, but making them more broadly popular may take some time.

“Vegetarians are not their primary market,” says Garrett Broad, a professor of communications and media studies at Fordham University. “In fact, in a lot of ways, they don't want their products to be associated with vegetarians at all. They're really aiming for those meat reducers. They're aiming for those folks who are maybe looking to switch out a meat option once, twice, three times a week. They want this to be a product that is meat. It's just meat from plants.”

The genetically modified ingredients in the Impossible Burger remain a source of controversy. In fact, it can’t be sold at all in certain European countries. The US, on the other hand, has a longer history of accepting genetic modification in our food systems, Broad notes.

The specific genetic modification occurs in the construction of a substance known as heme. Heme gives the familiar flavor, smell and texture to meat as we know it, but it's also found in a variety of plant-based sources. The Food and Drug Administration has decided not to certify this key plant protein as Generally Recognized As Safe (GRAS), but this is not an indication that the burger is unsafe to eat, Broad says.

“The FDA hasn’t said that the hemoglobin ingredient is not safe. What they have said is that it has not passed their Generally Recognized As Safe requirement, as yet,” Broad explains. “They’re looking for more testing from Impossible Foods to meet this GRAS requirement. … The history of the FDA and the history of food science and technology suggests we're likely to see these ingredients get the Generally Recognized As Safe designation.”

Environmental groups and food activists don’t speak with a unified voice on this topic, Broad says. While some are generally supportive, in large part because of the known environmental harms caused by contemporary animal food production, Broad says, others are asking Impossible Foods to pull the burger from the market until it gets official FDA approval.

These groups are concerned “as much about process as they are about the product," Broad explains. Their concerns center on who is making decisions about “what we're going to eat and the transparency in the regulatory process,” as well as a general skepticism about genetic modification, which they see as potentially harmful to the environment and human health.

Plant-based burgers have seen significant growth in market share in the last few years, but much of that has been at high-end grocery stores and high-end restaurants. That might, however, be changing, Broad says. Beyond Meat now has a deal with Safeway, and their “burger” is now available at other major mass-market grocery stores, primarily in California.

Price is still an obstacle for the average shopper, but Broad points out that if consumers paid the full price of a beef hamburger, taking into consideration all the costs to environmental and human health, “that couple-of-dollar burger from McDonald's really costs more.”

“That's an argument that these folks make, too,” he points out. “If we were able to have a level playing field here, these prices could get to parity even quicker. But there is still a way to go. … With scale and with time, I think something like a quarter of the market in the next 20, 30 years would be huge, going from this very niche space that we're in now.”