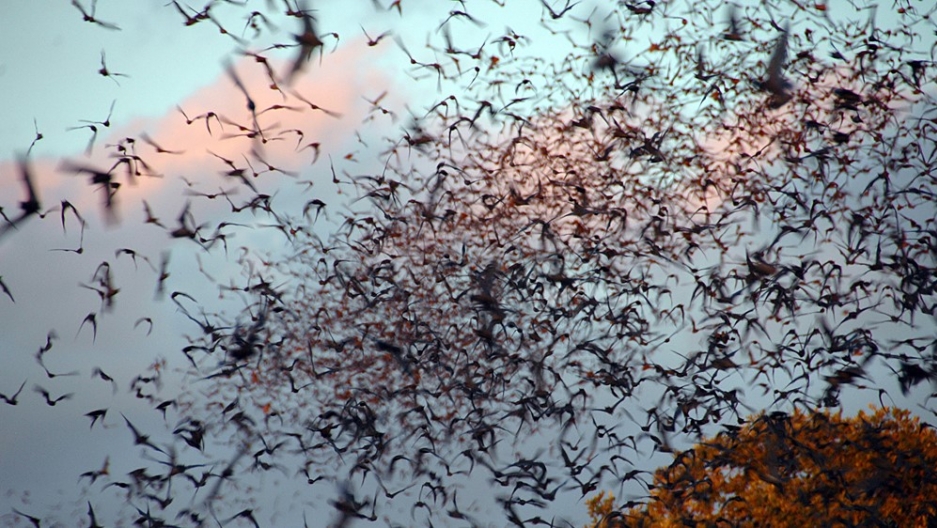 Venture near a cave at night, and you may glimpse a phenomenon that still stymies scientists: Thousands of bats streaming out of the cave at high speeds, using echolocation to avoid in-air collisions.

“All we know about science, physics, biology says that [bats are] doing an impossible task by echolocating in these large groups,” says Laura Kloepper, an assistant professor of biology at Saint Mary’s College in Indiana. “What we know about how echolocation works is that when they're in these groups, the signals from each bat should be interfering with each other.”

In a swarm, the bats “should be jamming their sonar and colliding and falling to the ground,” she adds. “But despite what we think is impossible, the bats are doing this — and they've been doing it this way for millions of years, so that just means we're missing part of the equation.”

Figuring out how bats use their biological sonar to move through swarms could someday help us engineer safer self-driving cars, for example, or improve other sonar and radar devices. But to get there, Kloepper says scientists need to better understand what it’s like to be a bat. And doing that takes diving right into the swarm, using some very creative methods.

“Now, I can't put on my Batman costume and fly into the swarm of the bats,” Kloepper says. But her team does put recorders on a zip line and send them through the bat swarm. They also use drones to record the bats — and even a hand-raised hawk named Belle, who flies through the swarm wearing a custom-built microphone and video system.

Kloepper and her students also venture into bat caves wearing sterile protective suits and full-face respirators. One big reason why becomes clear as soon as Kloepper explains what it’s like in the caves. Some of the caves she visits have a half-million bats inside them, and the guano builds up quickly.

“It builds up like a giant sand dune inside the cave,” she says. “So when we enter the cave, we walk up the sand dune and you kind of squish down into it. But not just that — there's all these insects in the cave that live off of the guano … [and] it’s a maternal cave, so there's baby bats that are just born and you know, baby bats, there's a high mortality rate from the newborns. They fall from the cave ceiling. So the moment they land on the ground, there's a special type of beetle that starts eating the flesh of the baby bats alive. So the whole ground is moving, and just seething with this movement.”

The air is choppy with movement, too — and what’s more, all those bats together create a lot of heat, Kloepper says.

“In fact, when they're in the cave in tight clusters, the temperature inside the clusters of the bats can exceed the body temperature,” she explains. “So because the bats can create such high temperatures, that's part of the reason also why they're always moving around and milling about within the cave, is to get rid of some of those temperatures.”

As Kloepper and her team work to crack the secrets of echolocation in animals (in addition to bats, Kloepper also studies the biological sonar of toothed whales and dolphins), she says there are ways you can also explore it yourself. That’s right — she says humans are capable of “a very rudimentary form of echolocation.”

“If you have someone put something up in front of your face with your eyes closed while you're clicking,” — here, she demonstrates what sounds like a simple click of the tongue — “you can actually detect the difference with your ear.”

This article is based on an interview from Science Friday‘s recent live show at the Brown Theater in Louisville, Kentucky.