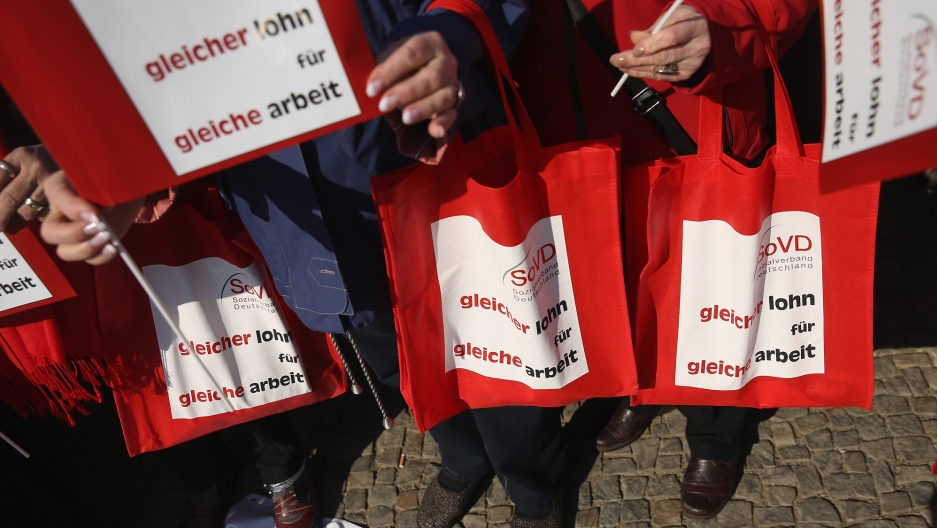 Women hold bags and signs that read: "Same pay for same work" at a rally for equal pay in Berlin, Germany, 2015.

If someone in Germany calls you a “raven mother,” it's not a compliment. Rabenmutter is a women-only put-down, a reference to the bird notorious for shoving her babies out of the nest.

“This word exists only in Germany, and it means ... no good mother leaves her child very early alone,” says Elke Holst, research director for gender studies at the German Institute for Economic Research (DIW) in Berlin.

We're not talking about ornithology, but about Germany's gender pay gap. Germany has one of the highest pay disparities between men and women in Europe. On average, German women earn 21 percent less than men, about the same disparity as the United States.

In part, Holst says, men earn more on average because women with children miss out on chances for better jobs and higher pay.

“Women are still expected to stay at home when a child is born for some years, or only work part time,” she says. “It's more or less the duty of a woman.”

But there's an exception to that rule — Germany's formerly socialist east. The gender pay gap in the part of the country that from 1949 until 1990 was the Soviet-allied German Democratic Republic is just 8 percent — far below the national average and one of the lowest in the world.

The reasons may lie in its socialist past.

Forged by state policy, that contrast became custom, and then culture.

Ute Frey grew up in East Berlin in the 1970s. Her mother was a teacher, her father a mathematician with female colleagues and a female boss. Today, Frey has children of her own, and she too works full time at a West Berlin nonprofit, LIFE ev, which trains women for the workforce. She says there was no question that she would work outside the home.

“It was a given,” Frey says. “And it is still a given for me that as a woman, with or without children, you go to work.”

Ute Frey grew up in East Berlin, where it was a given that women would work outside the home. “I sometimes have the feeling that now, here in West Germany ... women are fighting for things that we in East Germany already took for granted.”

Across the Berlin Wall, things were very different. Melanie Alperstaedt, who grew up in West Berlin in the 1980s, says as a child, she aspired to be a housewife, like her mother, and all the adult women she knew. She says back then, it seemed “normal” that women would stay at home. So, learning about women's lives in East Germany was an eye-opener.

“I was really impressed how normal it was for women to go to work in the German Democratic Republic. And how much independence this brought for them,” she says. “I was so surprised because I was growing up in a totally different society.”

Today, Alperstaedt works for Berlin's DDR Museum, which tries to explain East Germany to a western audience. She says East Germany's gender-neutral approach to many jobs brought women authority and autonomy they didn't have in the West.

But, she points out, they still lived in a dictatorship. And it's not that East Germany was a feminist utopia. Women there still did most of the housework, and on average, still earned less than men.

“The politicians didn't care that much about equality. They needed women to work in industry, in the economy and so they encouraged them,” Alperstaedt says.

But whether tools of state power or on their own, women went to work. And that's still affecting economic equality today. The legacy of four decades of division created what Holst, the economist, calls a “natural experiment between East and West Germany.” The results are striking.

That's not the whole picture, of course. More of the jobs in today's east are government jobs with fixed pay rates, rather than private-sector jobs where women tend to earn less. The west has struggled for years with a daycare shortage that has forced some mothers to stay at home even when they would rather go to work. Tax incentives encourage married couples to have one partner stay home.

But Holst says the root of the difference in pay disparities is culture.

“The women [in former East Germany] have a different culture. It's OK for them to work in the labor market, and they are not, as in west[ern] Germany, looked on as a bad mother,” Holst says.

East Berliner Ute Frey says more than a quarter century after reunification, some of the equality women had in East Germany has already been lost. Women with children face discrimination in Germany's job market, and public child care policies put mothers at a disadvantage.

“I personally have the feeling ... that women today are fighting for stuff that we in the German Democratic Republic just took for granted,” Frey says.

Alperstaedt says she has opportunities today that in her childhood weren't available to women in the west. But she agrees that German women are still held back by expectations about traditional gender roles.

“Society doesn't have in mind that women stand on their own, in their own lives, with their own independence ... and that it's important that they earn the same amount of money like men do,” she says.

Today, Frey is teaching her children that it's OK for mothers to work, just as her mother taught her. But she wonders how long that “typically eastern” approach can survive in a united Germany.

As the two Germanys have become one, over the years, the differences have indeed started to fade — but not always for the better. While Germany's gender pay gap, overall, is slowly shrinking, in eastern Germany, it's on the rise.

Note: The recording of the raven call in the broadcast version of this story was kindly provided by the Macaulay Library at the Cornell Lab of Ornithology.