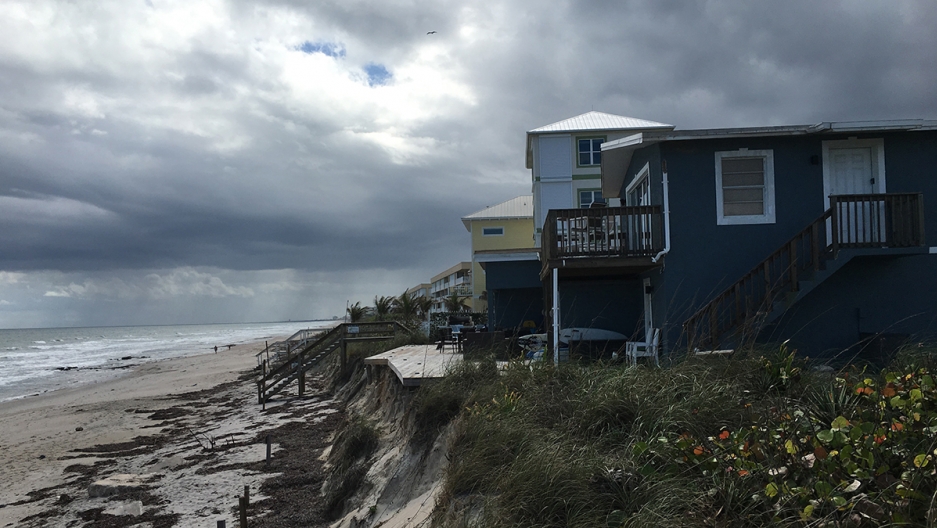 Houses in this Satellite Beach neighborhood are perched at the edge of a dune in a rapidly-eroding part of the Florida city. The city is one of the few in the state that's developed a plan to shore itself up against the rising seas and stronger storms brought by climate change.

In a tranquil lagoon on Florida’s east coast, Harold Wanless and Lynn Bauer catch sight of a manatee swimming just a few feet away from them.

The couple has driven up for the day from their home in South Florida to the small city of Satellite Beach, just south of Cape Canaveral, and watch with delight as the almost motionless manatee is joined by a sea turtle, and then another.

Bauer and Wanless are visitors to Satellite Beach, but they can’t help imagining what it would be like to live in a place this magical. “It’s lovely here,” Wanless says. “What a great place to live."

Except, not all is as idyllic here as it seems.

Wanless knows what he’s talking about. He’s the chairman of the Geology Department at the University of Miami, and a leading expert on climate change and sea level rise.

It’s a massive challenge, and few cities and towns here are squarely facing up to it. But Satellite Beach is one of the exceptions. The city has begun a long-term effort to protect and remake itself in response to threats that are already starting to take a toll.

“We’ve already had a house that’s lost its pool,” says city manager Courtney Barker. “Its deck is now teetering on the edge, and the rest of the homes are on the edge.”

The homes in question are in a part of the city known as Shell Street beach and park, where houses are perched precariously on the dunes. “It’s what we probably consider the highest eroding area of Brevard County,” Barker says.

Barker grew up in the area, and says she’s been to Shell Street beach more times than she can remember, so she’s seen it change. To try to stay ahead of all the change the city commissioned a block-by-block study in 2009, and under Barker’s leadership they’re using it to develop a plan to respond to rising water.

“Planning is so less expensive than reacting,” Barker says. “You’re talking $100,000 to plan and millions of dollars to react.” 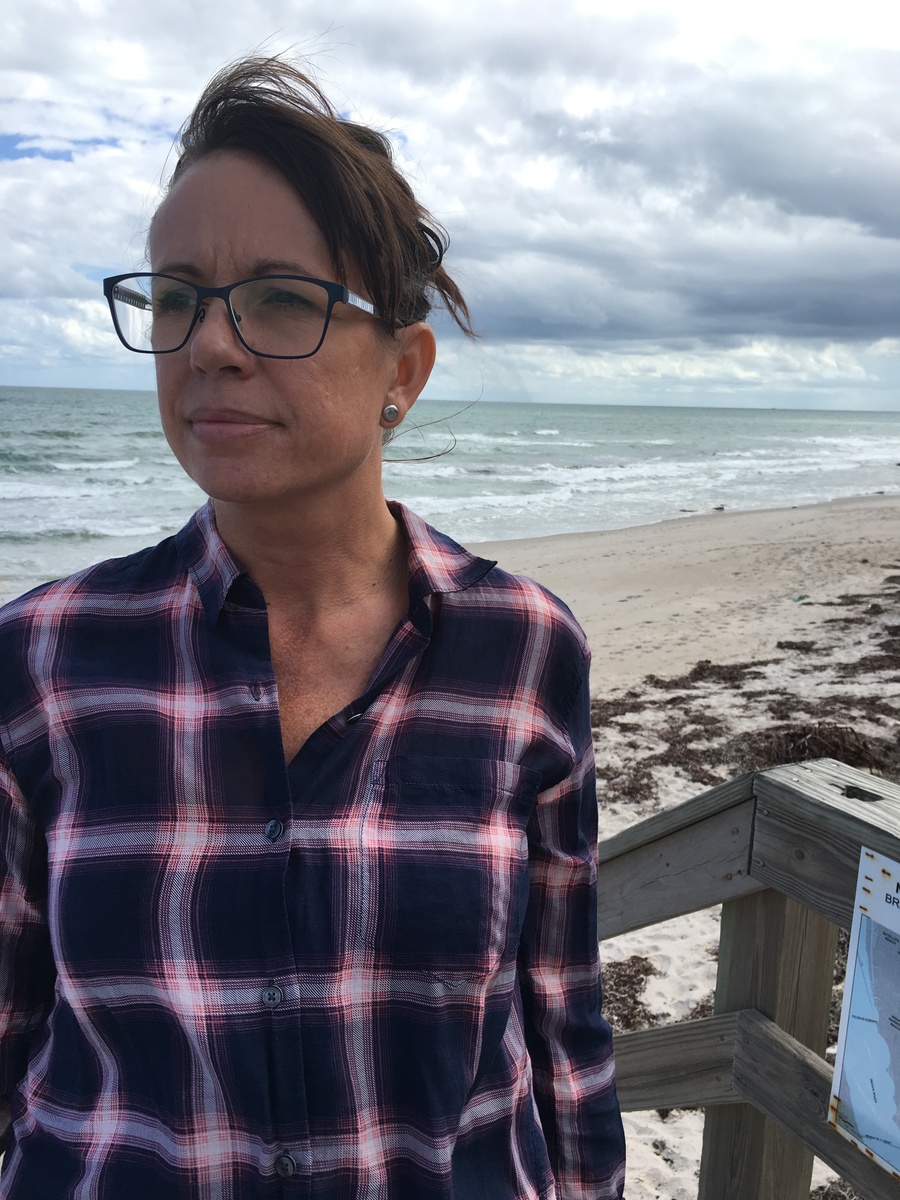 Satellite beach city manager Courtney Barker has seen climate change start to reshape her city's shoreline. Under her leadership the city has developed a plan to respond to rising water. “Planning is so less expensive than reacting,” Barker says.

Barker says the lagoon side of town, away from the sea, will flood first. It’s also the heart of town, home to City Hall, the fire station, the post office, all the town’s schools, two churches, the police station and the public works department, all within a few blocks of each other.

“Not long ago, part of this area was underwater,” Barker says, pointing to the fire station. “We had a rain event — that was about a week after [Hurricane] Irma — and had to actually tow people out of the area.”

This part of Satellite Beach is projected to be sitting in water by 2050.

More from Satelllite Beach: This new green building may be just the thing to help a Florida town stand up to climate change. Or not.

The city’s plan includes restoring dunes and buying up some threatened properties and turning them into parks, raising roads, putting in bigger pipes to drain away flood waters and relocating critical infrastructure like the fire station.

It’s all important and necessary work. But a tiny city like Satellite Beach can only do so much on its own because it doesn’t control key parts of its infrastructure, according to John Fergus, a resident and a retired military veteran who has been active in the city’s efforts.

“In or after Irma, we had two million gallons of raw sewage dumped into the lagoon because [the floodwaters]  overwhelmed the system,” Fergus said. But he says the city couldn’t do much because “the county owns that, we don’t own it."

“Florida Power and Light owns the substation,” he continues. “Florida Department of Transportation owns [highway] A1A that’s near the beach.”

And in Brevard County, Satellite Beach is the only city planning for climate change. In response to queries for this story, Brevard County officials said flooding and erosion was the domain of emergency responders. No planning, just funds to respond.

That doesn’t surprise Wanless, who knows the frustrations of trying to educate Florida officials about climate change.

“We have a total denial in our current governor,” Wanless says. Republican Rick Scott has been in office since 2011

According to reports, under Scott, state officials have even been told not to use the words “climate change” or “global warming” in official communications. Scott’s office has said no such policy exists, but didn’t return a call for this story. Still, denial of climate change is widespread in Florida.

In the absence of leadership from the top, Wanless applauds the efforts of Satellite Beach to prepare. “It’s the city governments and the town councils that are going to have to take charge,” he says.

Yet he can’t help but wonder if it’s all just postponing the inevitable.

“Wouldn’t it be cheaper to help people move on rather than having to try to re-establish an infrastructure in a place that’s now too vulnerable, too low to make it really work?” he asks. “You could use that money to help people relocate.”

But then Wanless gazes at the beauty of the lagoon, entranced. He knows there’s no easy solution. How do you ask people to let go of the place they live in and love?

But the question is lurking in the background here. Even the man who did the study that underpins Satellite Beach’s plan to shore itself up recognizes the efforts can probably only postpone the inevitable.

“Ultimately, in the latter half of this century there will have to be some kind of organized or disorganized retreat off of these low areas and on to higher ground,” says Randal Parkinson, of Florida International University’s Sea Level Research Center.

“How that is worked out, right now nobody knows,” Parkinson says. “But they are beginning to talk about it at least.”